After the COVID lockdown caused the cancellation of this ride originally, 14 members were keen to get out on the road for Damien Tammer’s “The Ride formally known as the Cup Day Alpine Run”

The first day saw us riding through a mixture of gravel and sealed roads to Jamieson. South road was a wide, loosely gravelled road which gave some a chance to fine tune their riding technique. After a lunch stop at Hayfield, we continued on to Firestone creek road, which is a narrow twisty road carved into what feels like a cliff face at times, along the firestone creek.

We emerged at Dargo with Ample time to set up camp and head up to the Dargo Hotel for a beer. 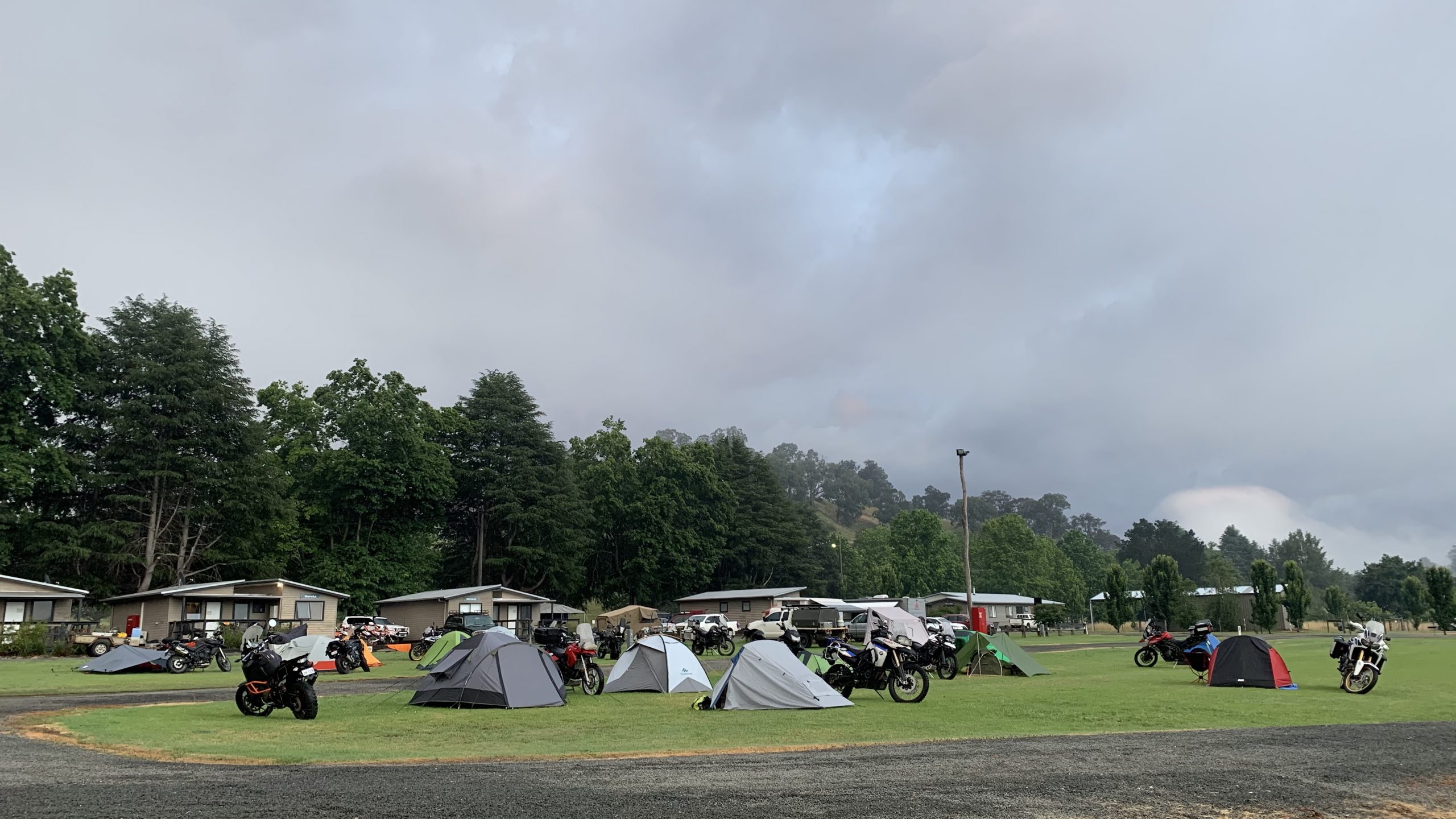 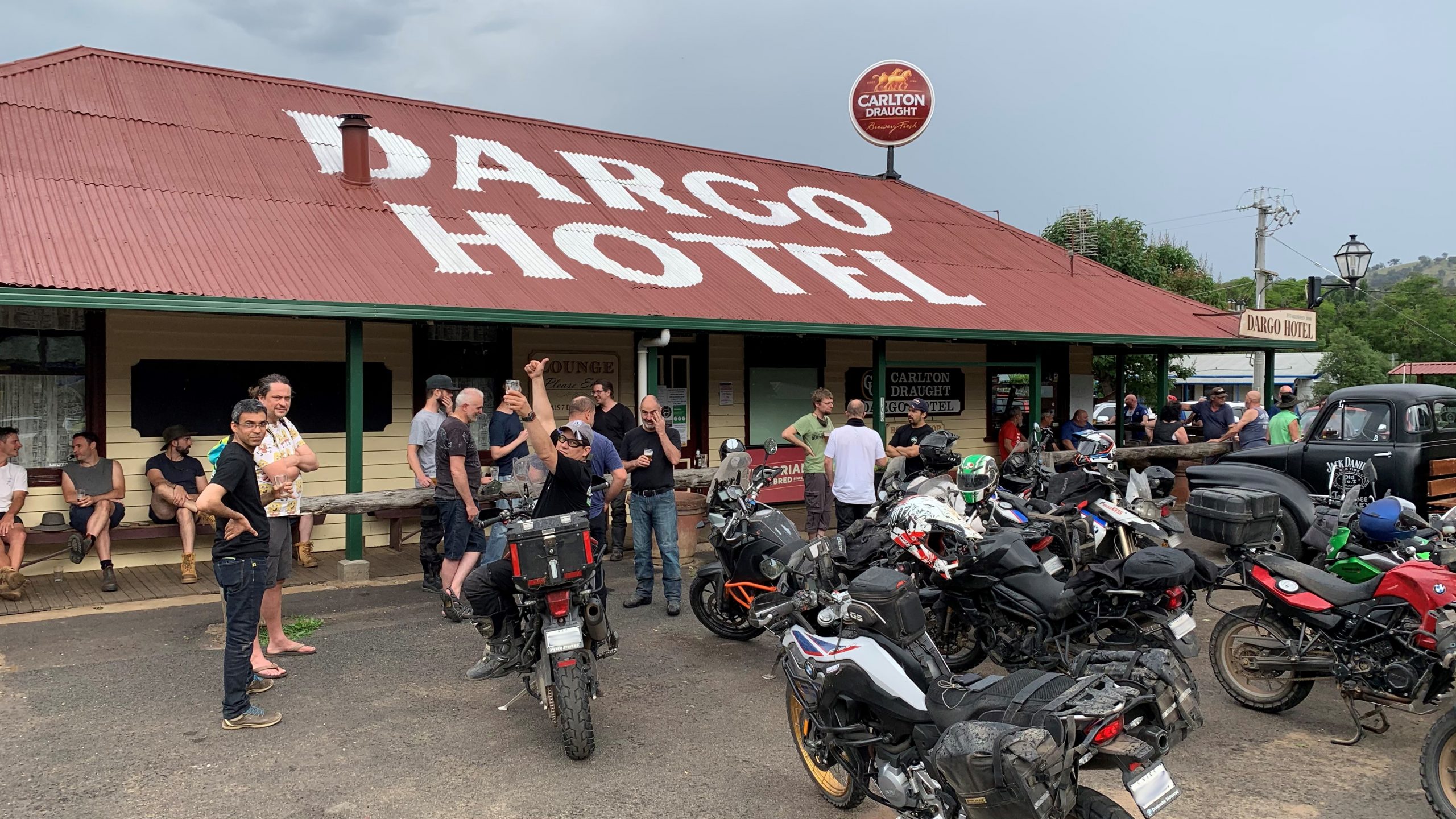 Later in the evening, we ate at the Dargo River Inn, and had some more beers around the fire barrel. It was a great evening! We had some rain overnight to test everyone’s camp setup, but fortunately the grassy campground at the Dargo River Inn dried well in the morning for the pack up. Our only criticism of the venue is that the amenities for the camp ground were very small and basic. 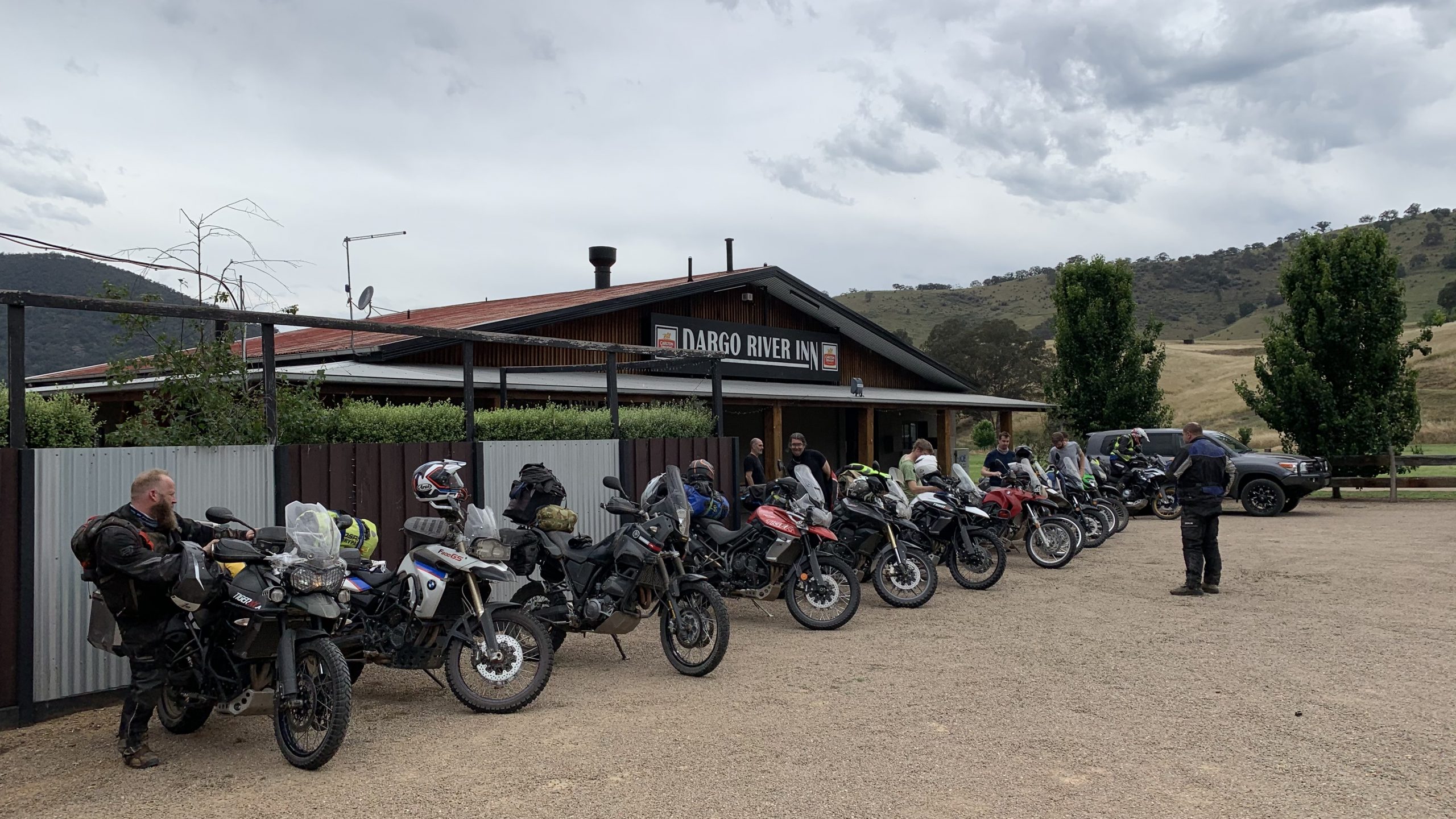 On the second day we headed north out of Dargo. The original trip route was going to take us up the Dargo High Plains road, with a side trip to Blue Rag, but as the High Plains road is closed for repairs — that will have to be a trip for another day! Instead, we take Birregun Road, which is more to the east. Turns out the road has been freshly graded, and makes for some fantastic riding with some fast sections at a 1200m altitude. We then hang a left at Dinner Plain track. 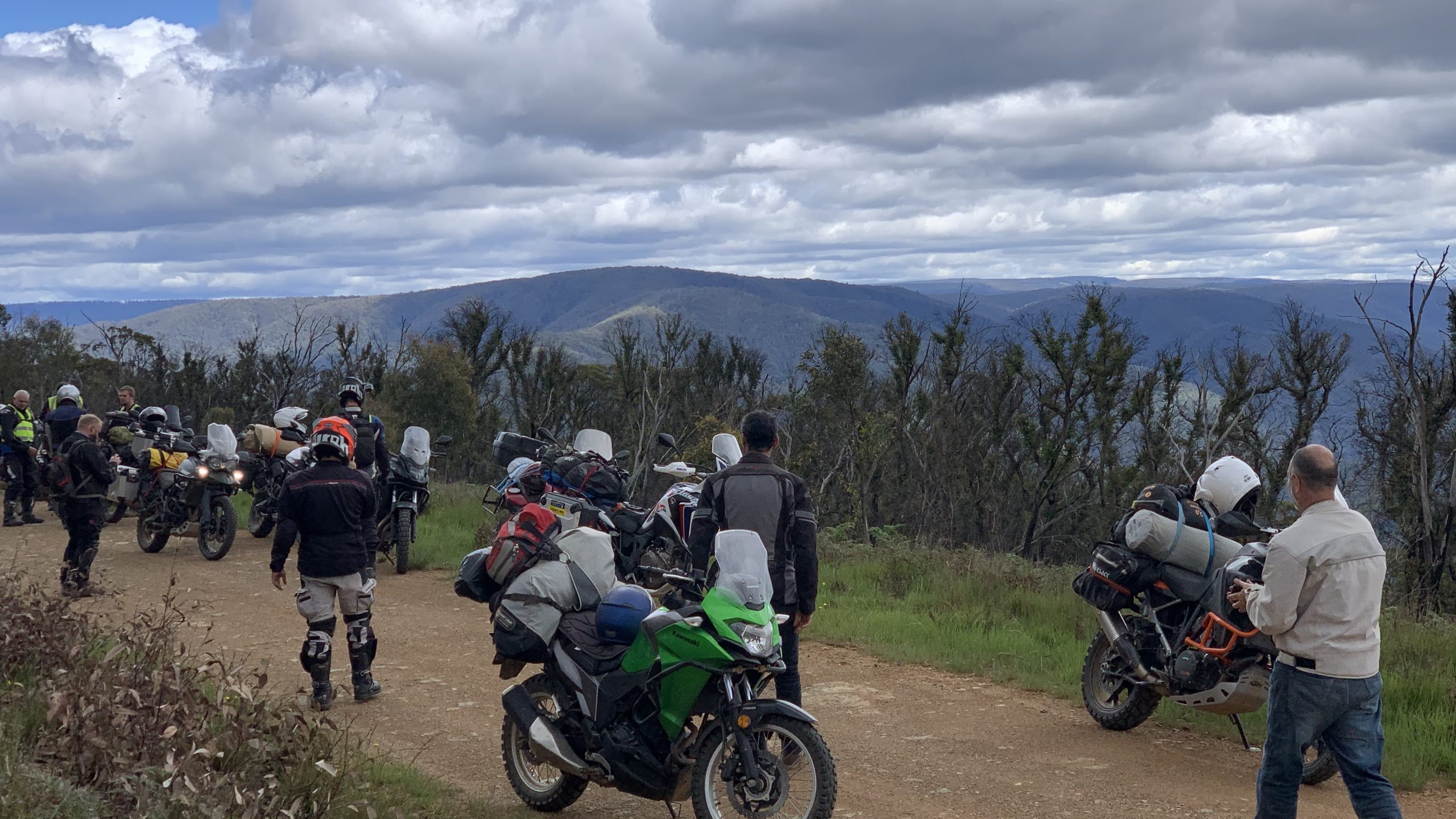 Dinner plan track is a bit more narrow, and has the occasional short jump up and rut. A few riders with less aggressive tyres felt a bit uneasy with an unexpected power slide or two, but all made it to the intersection with Victoria river track, which we continued along until we got to a small bridge in a gully. The plan was to have Rolf wait at the bottom to film us all coming down into the gully. Mas decided to treat us with a spectacular slide off the track to land almost in the swamp below, only to be stopped by a rock. No injuries except for an upper crash bar which decided that it no longer wanted to be attached to the Kawasaki. 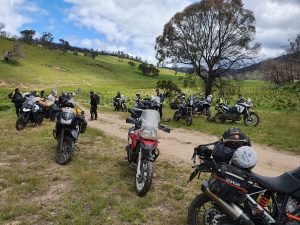 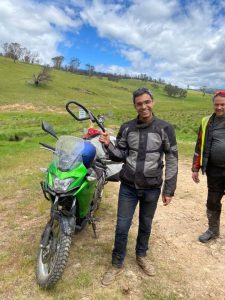 We then stopped at Dinner Plain for lunch. A very quiet place, but a small pub and a café were serving lunch.

After lunch we took the Great Alpine road over Mount Hotham, stopping to grab a photo at a lookout, before descending back down to Freebourough just out of Bright, which is where we would be camping for the night. Spending most of the day at altitude, we were surprised of how warm it was, and some decided, after setting up camp, to head to the river for a beer and a swim. A smaller group broke off to explore some of the tracks in the hills around Bright. There was some unexpected steep sections in rocky terrain which saw a couple of small tumbles, with perhaps a scuff on a crash bar. 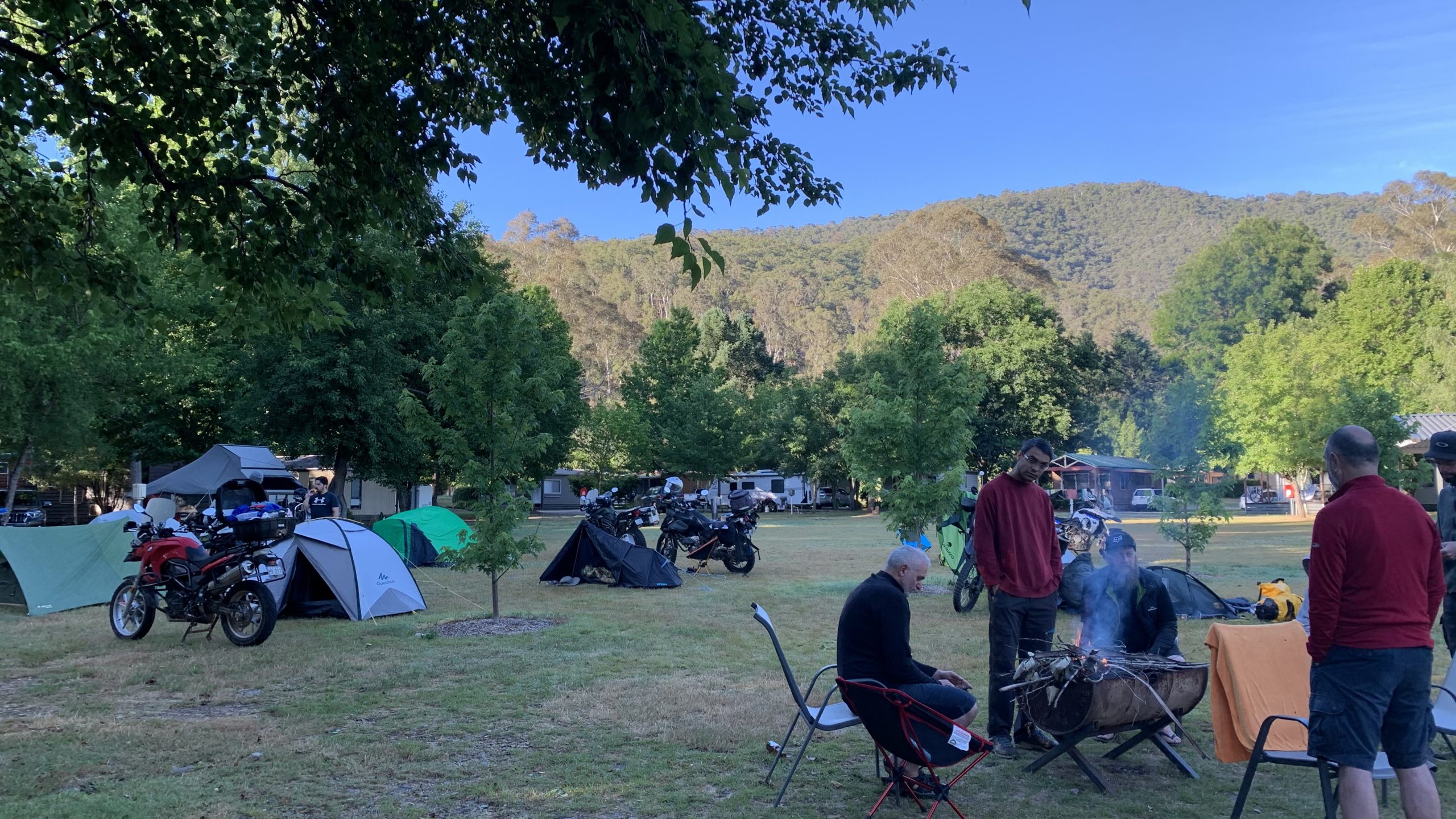 We made use of a very well equipped camp kitchen for a BBQ dinner. A great campground with good amenities — we will very likely return.

Final day on the road and we clocked up a lot of miles on the hard top travelling through the king valley, great open roads and scenery. We arrive at Jamieson for lunch.

Some keen to hit the dirt again, it was decided to split the group with those wanting to continue cruising home on the tarmac doing so via Eildon-Jamieson road, the remainder tackling Poletti Track and Mount Terrible track. Just as we’re about to reach the summit — there is a problem. Stephen has managed to puncture his tyre. After a failed attempt to plug and inflate the tyre with the convenient assistance from a compressor in a Forest Fire Management G-Wagon, Peter had the wheel off and was fitting a tube stolen from the Vice President in no time. After about an hour, we were back on the road again.

After tackling a very rough patch along Big River road, the repair done to Stephen’s bike gave way. The group split once again so those still needing to travel into the city could do so, with Ian, Wayne, Robbo and Stephen waiting well into the night at Cumberland junction for the RACV to work out how to collect a motorcycle (a story for another day!) 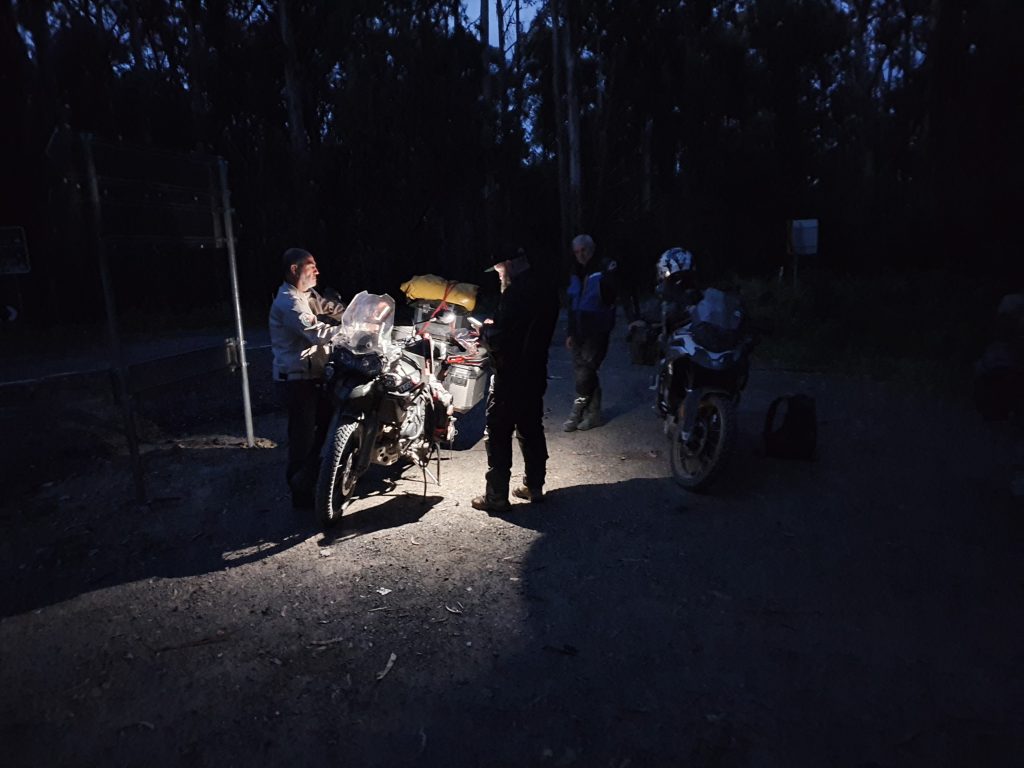