A dozen intrepid souls headed up to Lock Sport for a weekend of sand riding. For the uninformed, Lock Sport is where Robbo spent many a summer holiday tackling sand on anything that had two wheels and an engine: and it showed; he was more than a bit competent on all the tracks we rode, and put in an awesome exhibition ride up a gnarly, rutted hill on Chris’s enduro bike, just for the hell of it.

The weekend started early for Tim, Simon and Greg, who met at Yarra Junction on the stroke of 9:00am (God I love punctual people). It was a Kodak day: blue skies, light winds and a temperature range of 18-25 degrees. We worked our way onto Bunyip Road, which is a dirt road running through the natural bush of Bunyip State Forest, and came out at Neerim South.

We then followed the blacktop up a lovely set of twisties to Mt Baw Baw, had a quick coffee and bite to eat and then got back onto the dirt, where, in the interest of full disclosure, I might have had a wee “off”. There was no harm to bike or rider so we proceeded to Rawson, and then by a series of minor roads (anything to avoid the freeway) we headed across to Honeyford and Lock Sport, arriving about 4:30pm.

Apart from Lock Sport being Robbo’s old stomping ground, it also serves as the playground for Moe’s rich and famous, much like Monaco is for Europe’s glitterate, except that caravans and jet-skis substitute the multi-million dollar apartments and super yachts. 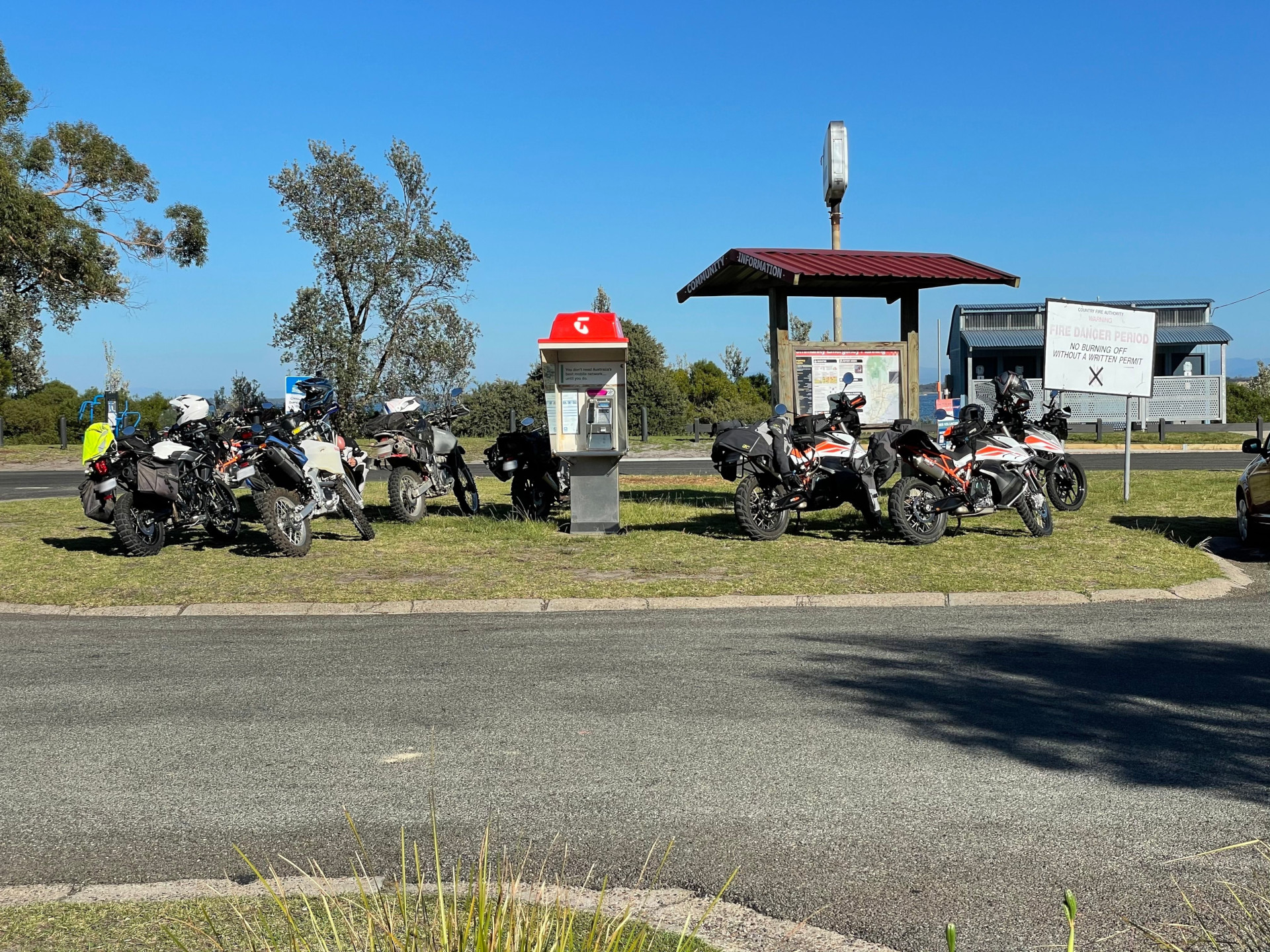 The swagger brothers (aka Chris and Jamie) had arrived with a tent (purchased the night before by Chris’s wife and of a size that put Martin’s Taj Mahal to shame) and along with John, had claimed their spots, built their castles, and were just putting the finishing touches on the moat when we arrived. 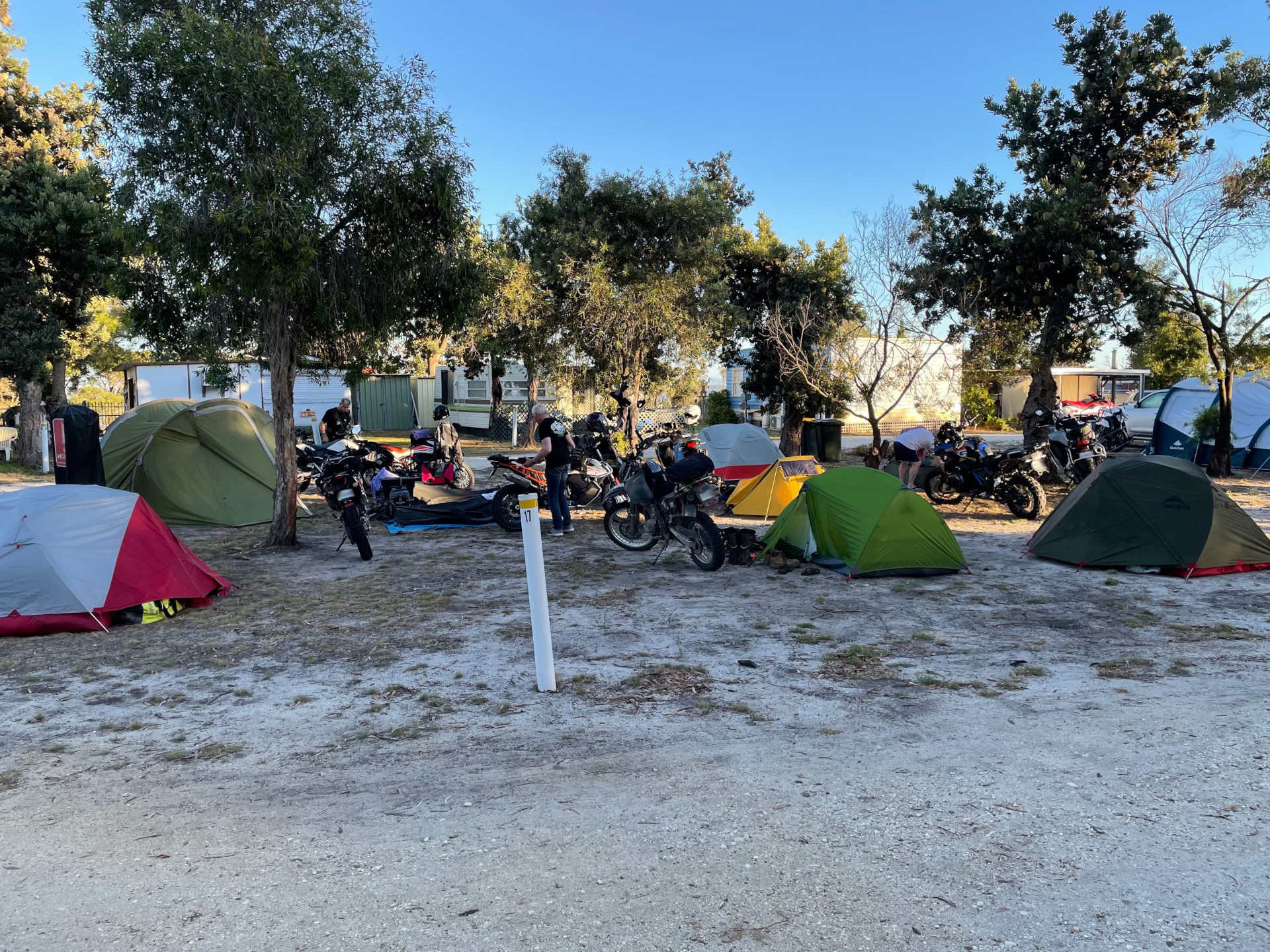 Stragglers kept arriving throughout the evening, with resourceful ones like Christian having his dinner (tomato and basil mush) courtesy of a Dee-hy pack and a single gas burner. The rest of us took the more conventional option of a few beers and a pizza at the pub.

As twilight settled we headed back to camp to await the much-anticipated arrival of Martin and a fire (courtesy of Jamie and Simon) which I’m sure Don (one of CFA’s finest) wanted to put out.

Martin wandered into camp at about 11pm, a forlorn figure pushing his bike which steadfastly refused to clear a fuel blockage for the rest of the weekend. This was in spite of the enthusiastic first aid from “Liability Colin”, who is more than handy with a tool, but copped a lot of good-natured sledging for his inability to arrive anywhere on time: hence the nickname.

Sat morning saw Colin the last out of bed (why are we not surprised) and eventually, after an egg and bacon sambo and copious cups of coffee, we headed out to the sandtrap for a bit of Le Coq Sportif. Fashion stakes were definitely won by Jamie who was sporting every bit of KTM merchandise on the market, even down to orange flip-flops with a bottle opener in the sole- you gotta have plenty of braggadocio to pull that off. 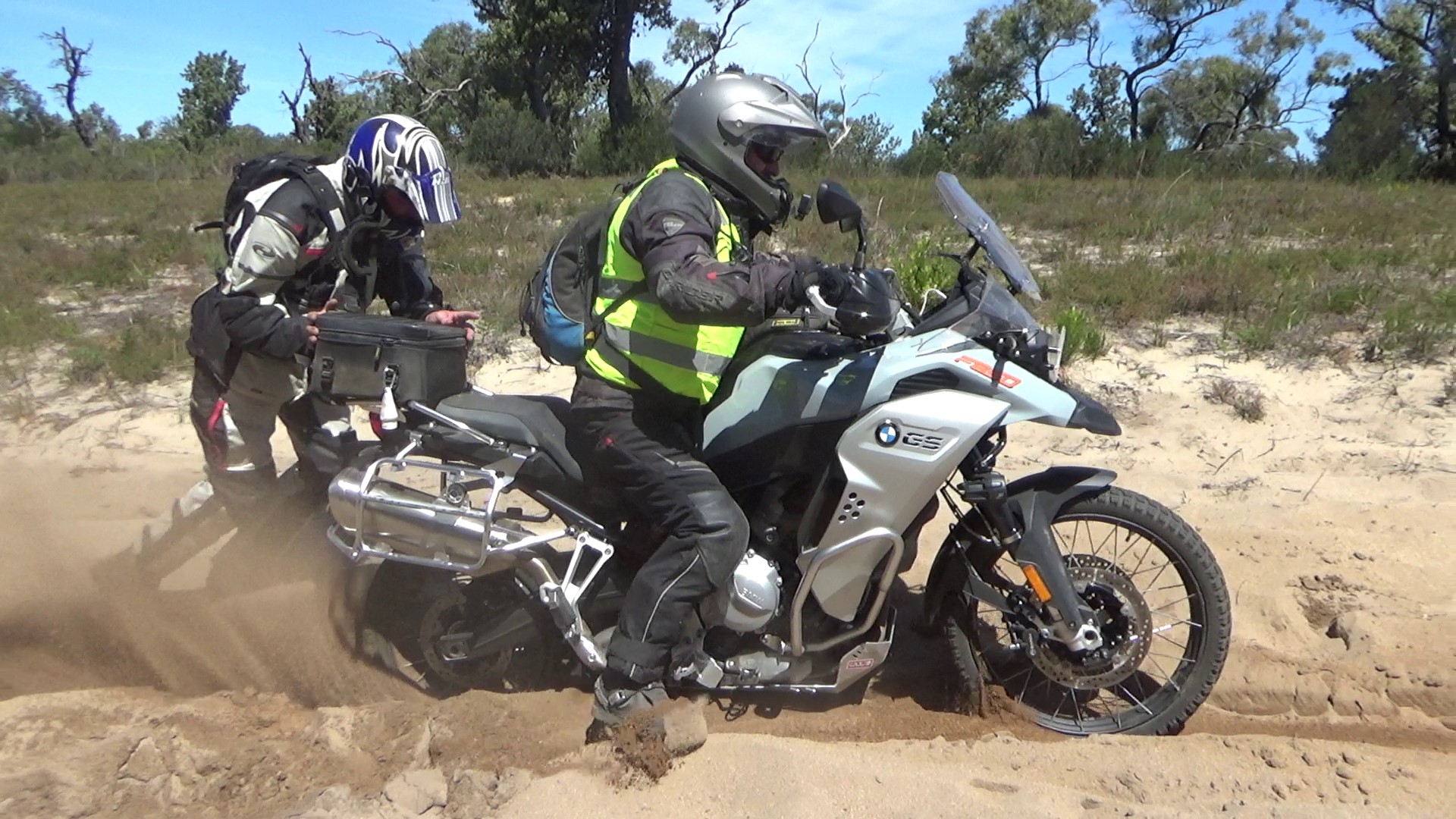 A short run on firm surface with a sprinkling of sand was our introduction but we then had Rolf give us a demo on how to ride in smaller sections of deep soft sand, and a fine job he did of it. 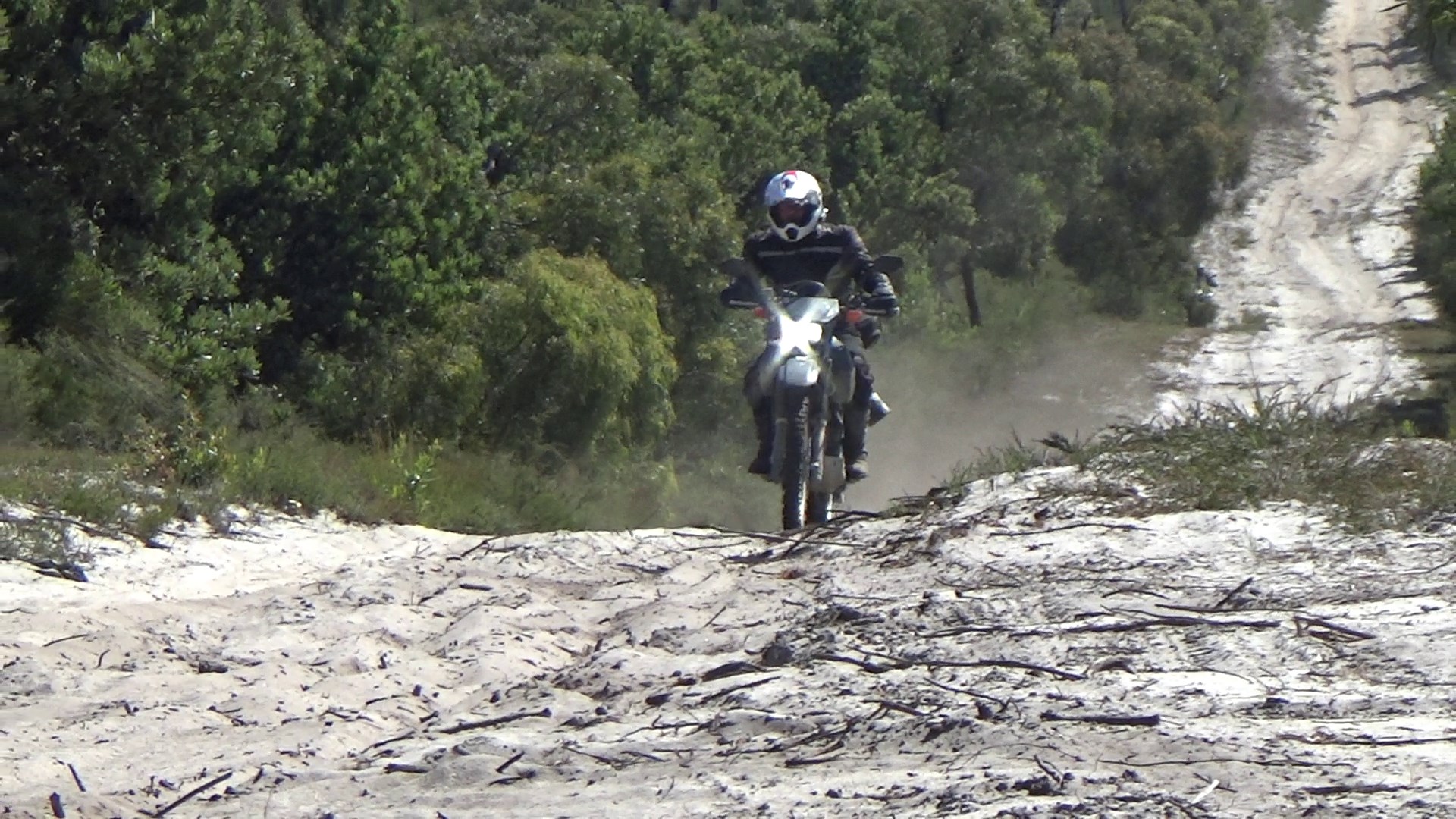 Throughout the morning we progressed to riding slightly more difficult tracks with both corners and variable surfaces; it became apparent that a more aggressive approach paid dividends. 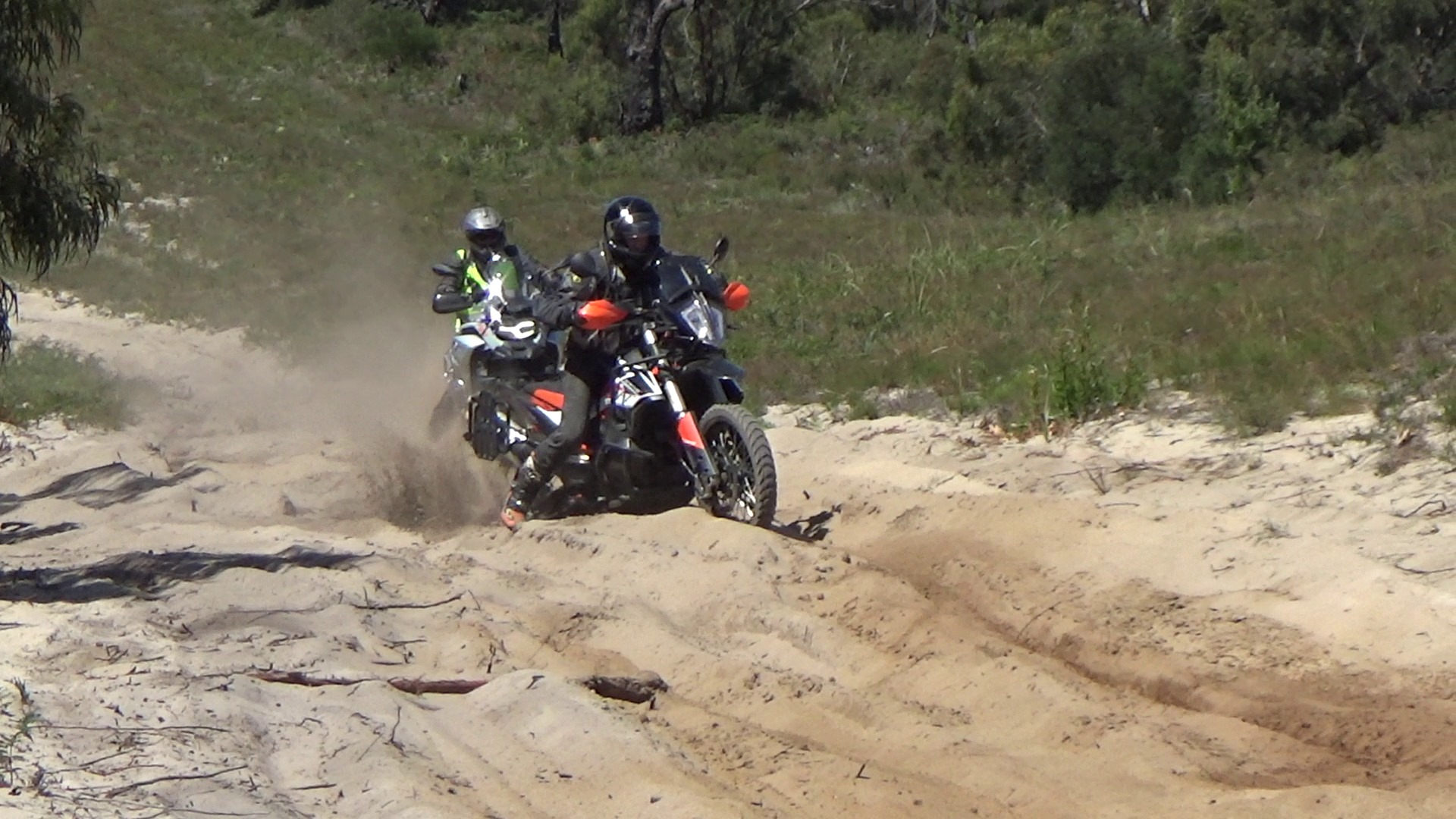 Lunch was taken about midday back at the fish and chip shop in the heat of the day but we followed that with an hour or two of slacking around at camp or immersing ourselves in the lake.

The afternoon session got more interesting; more difficult terrain and deeper sand saw most people spitting sand at some stage, with Simon being the big improver- zero to hero in a day. Some great individual endeavours by plenty of riders, but the skilful gentlemen-riders like John (on the big Africa twin) and Greg (who would’ve thought) banged themselves a bit and joined me on the “Chicken Highway” when we encountered the more grisly section of the track. The Chicken Highway had some sparse vegetation and a firmer surface which gave more grip. 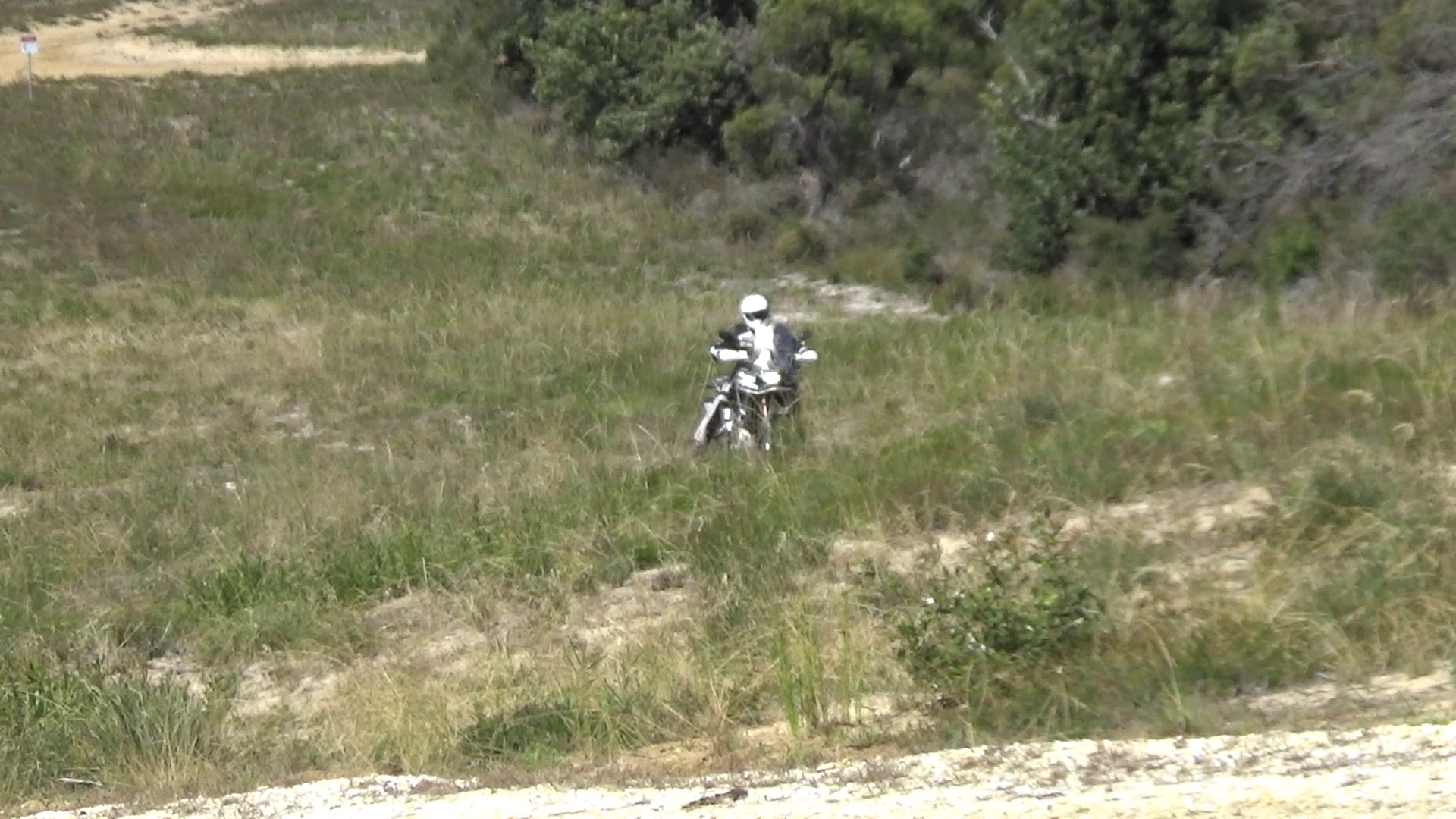 After this it was back to camp to shower, change, and swap stories before a drink at the yacht club while waiting for ‘Liability Colin’.

We then settled in at the pub for the inevitable chicken parma (how can you go past it) and copious dwinky-poos.

Another evening, much like the first, where the Helinox chairs ringed the fire and more booze diasappeared. Thanks to John for providing a slab for an undeserving group- generous gesture! It’s very possible that Greg, who is on a strict diet, survived the weekend on two small cans of tuna, a lettuce leaf, and no booze. Exemplary self-discipline.

Sunday morning saw a few enthusiasts go for a final squirt while the rest of us went to church, or drank too much coffee before finally leaving as a group of eight on Robbo’s planned ride home through a bunch of forest trails with some sand, dirt roads and the odd bit of the Macadam. The mercury tapped out at 35 in the afternoon as we got back to Melbourne; arriving home to a cold shower and air-con was oh so sweet!

The camaraderie around the group was surprising, especially considering how little we knew of each other before the trip; long may it continue. 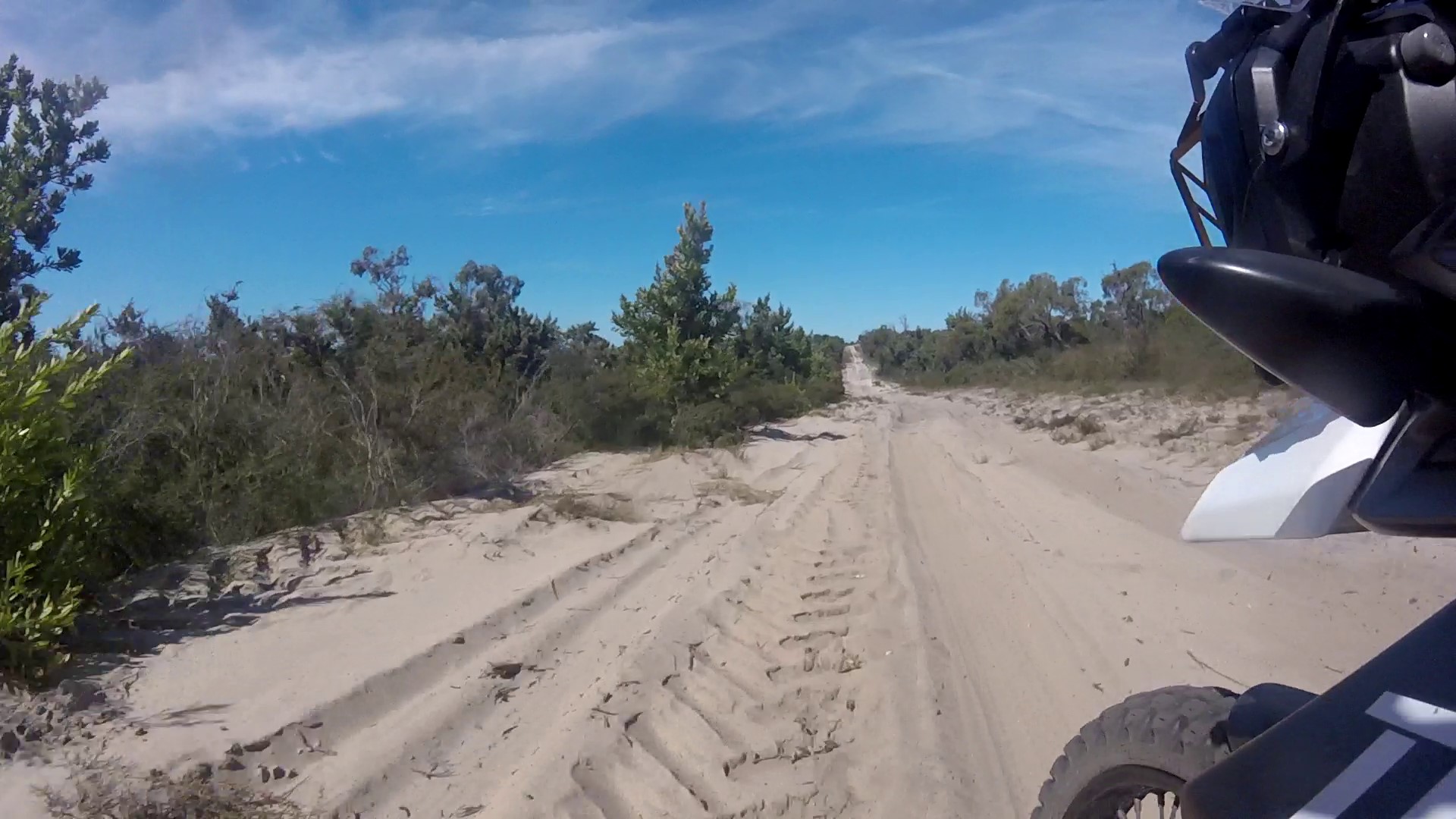