On a warm and sunny Saturday, a group of 12 riders set out from Weeribee on a 300km trek across the west towards Halls Gap. Through the plains, over the Brisbane ranges and past the towering wind turbines. 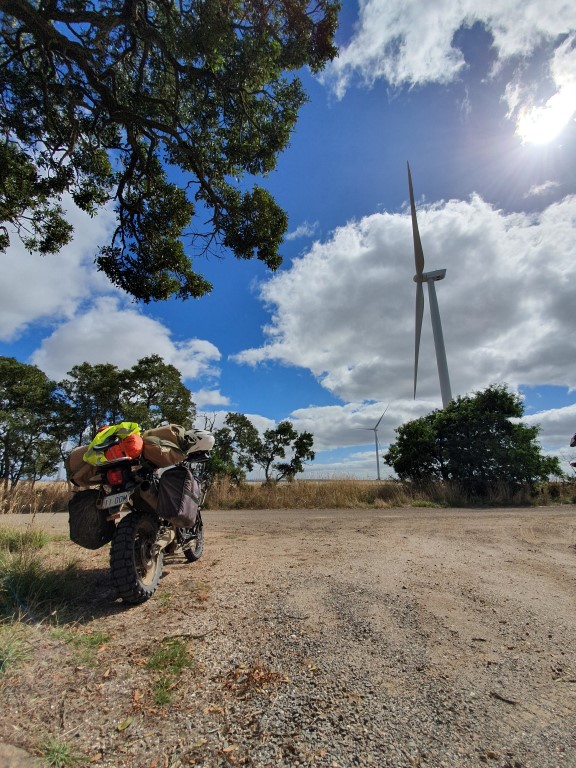 A mixture of tarmac and long stretches of gravel roads, some soft in places. Mas managed to lose control on what he described as a moment of complacency, resulting in a bent bike and a grazed arm, but the Madcats were quick to jump into action deploying cable ties, bandages and brute force to get Mas Back on the road again. 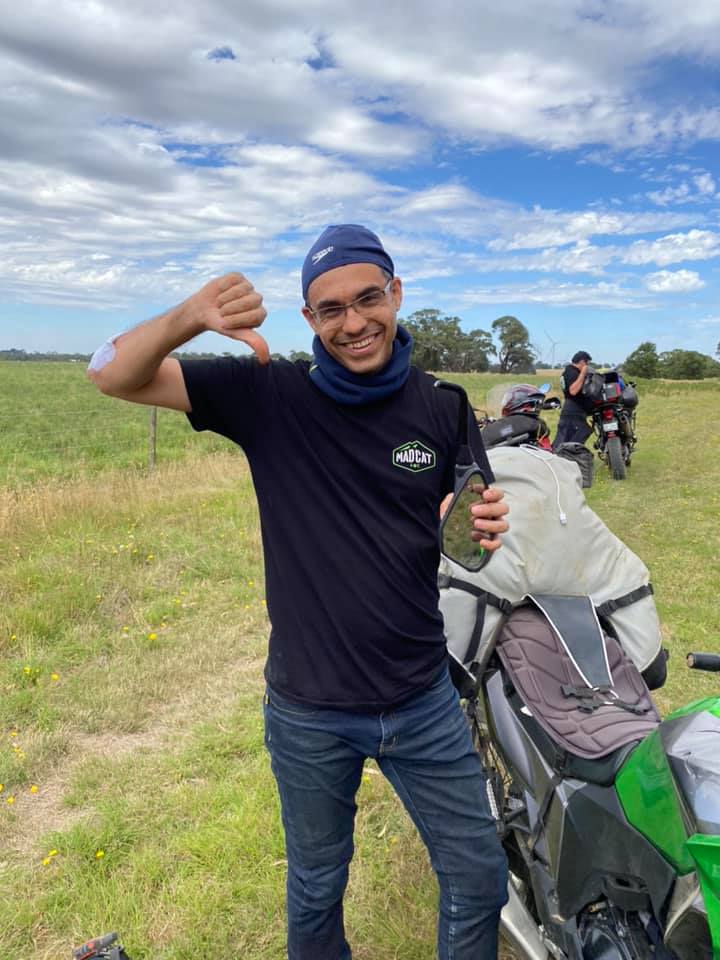 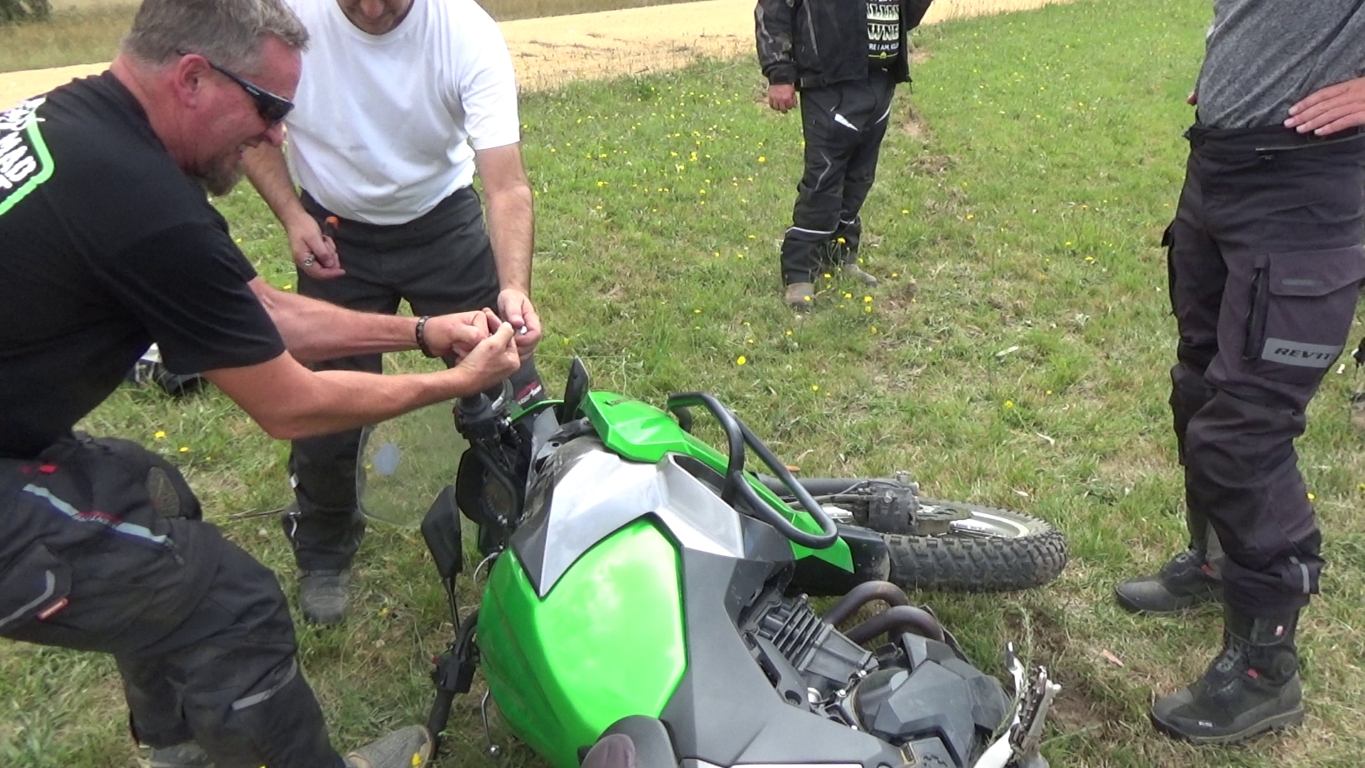 A little further up the road in Skipton we meet up with Ian, and continue the ride into Halls gap without incident.

We are greeted at Halls Gap by Gail and Jonathan, and all that is left to do, is set up camp and have a cold beer – the former is bit of a circus, but we excel at the latter. 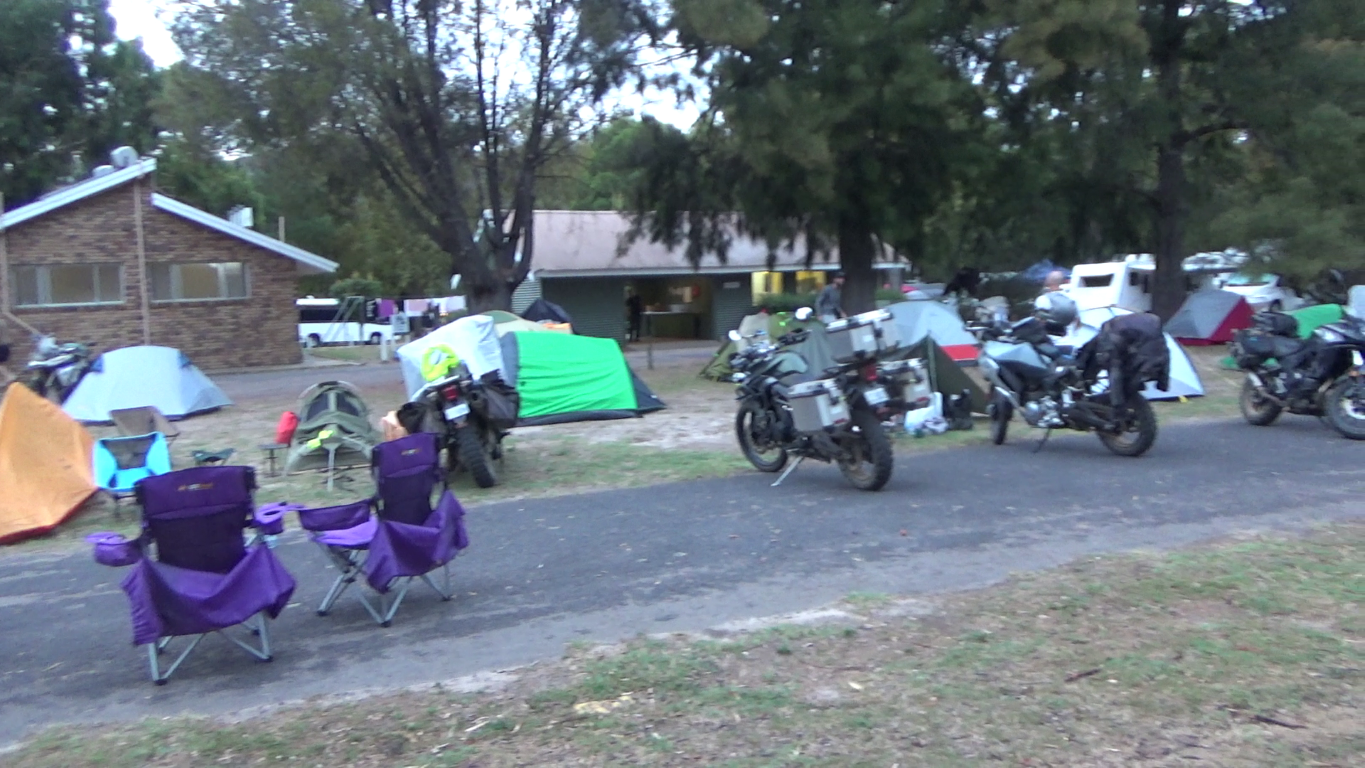 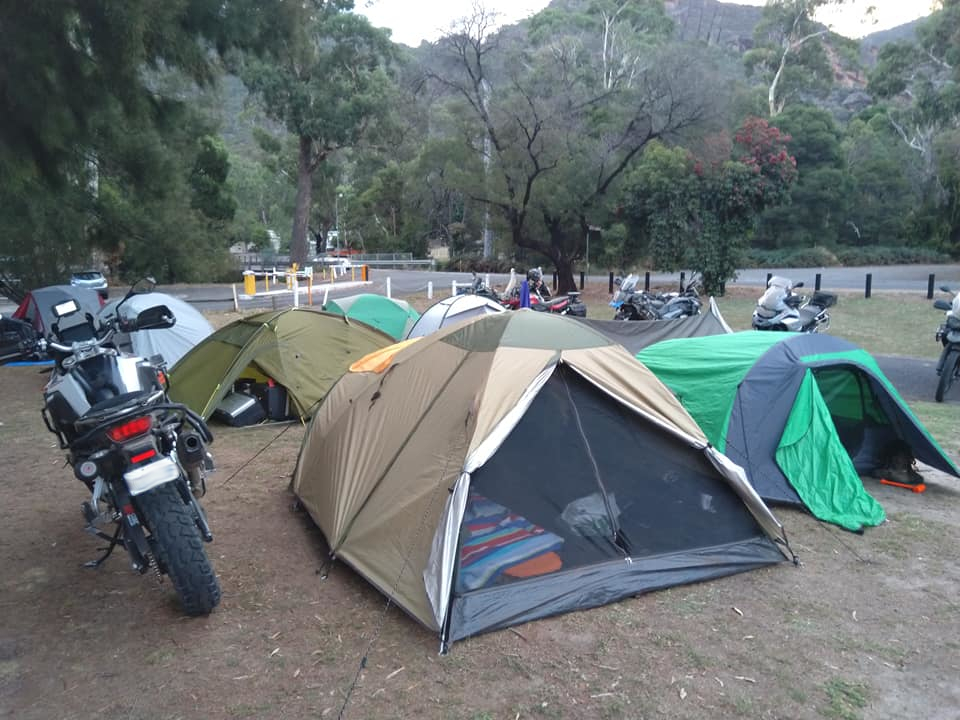 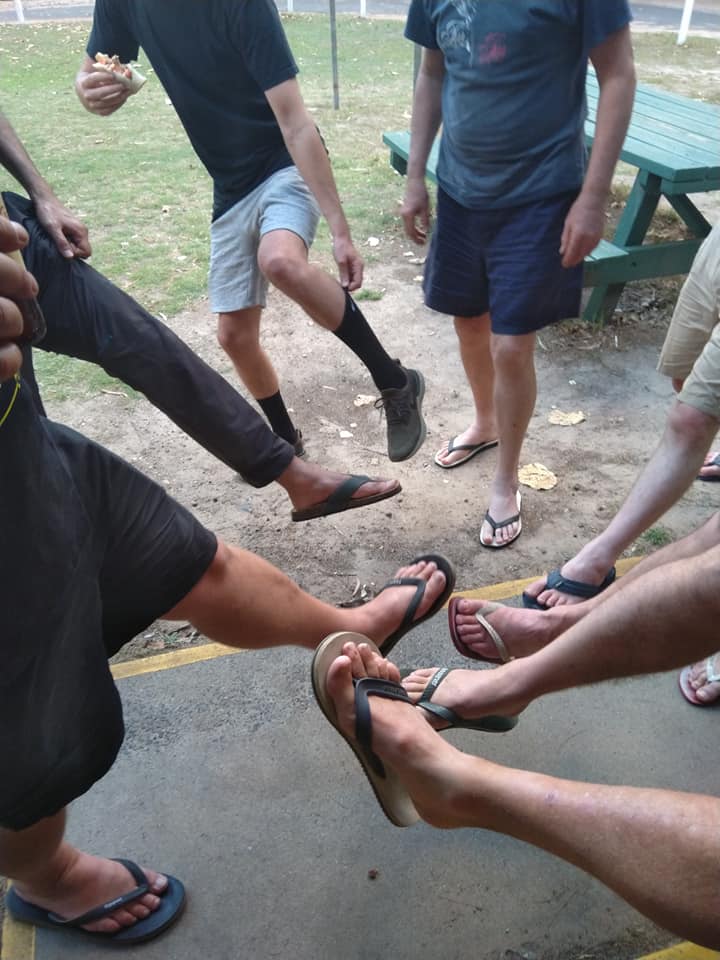 Sunday brings a cooler morning, with low cloud obscuring the view of the Grampians from the caravan park. The bikes, now minus a full load of camping gear, are checked over and prepared for the day ahead.

Prior to the club’s incorporation, the meetup group had a ride to the Grampians in which the weather made many of the tracks too difficult to ride, and resulted in an injured rider and a trip cut short. It looks like the weather has turned it on for us today — so we’re all enthusiastic to complete the rides that were planned almost 2 years ago.

It was immediately obvious as soon as we left the main gravel road that those with sand riding experience had the advantage, the first track reminiscent of the tracks at Loch sport. the occasional sand trap was a common theme throughout the day. 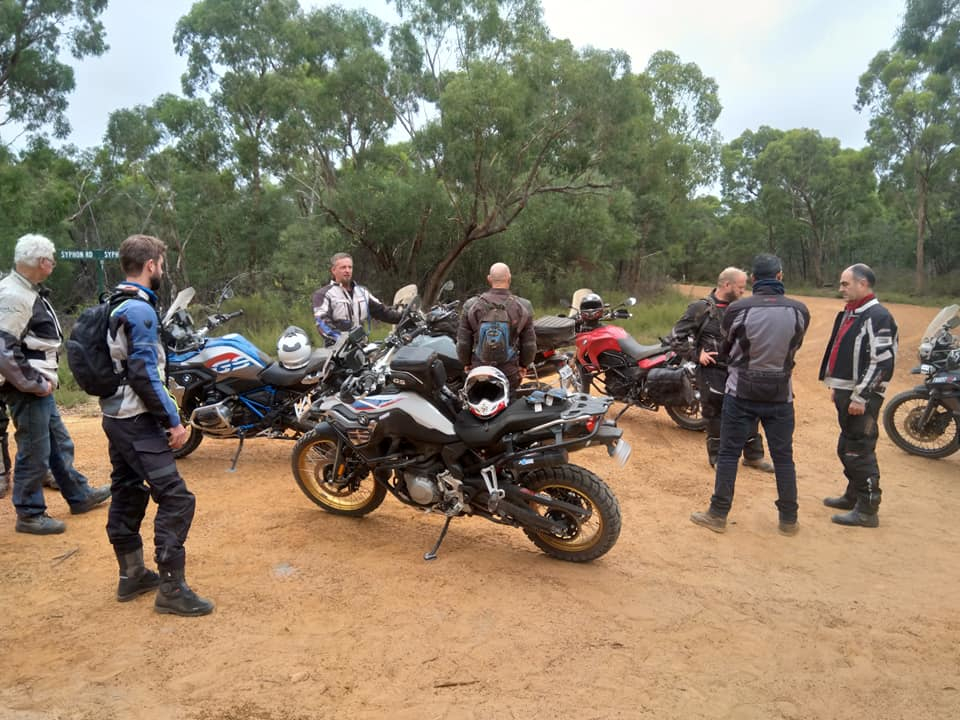 We made our way to the climb on Goat track, which was a little more challenging than first anticipated. 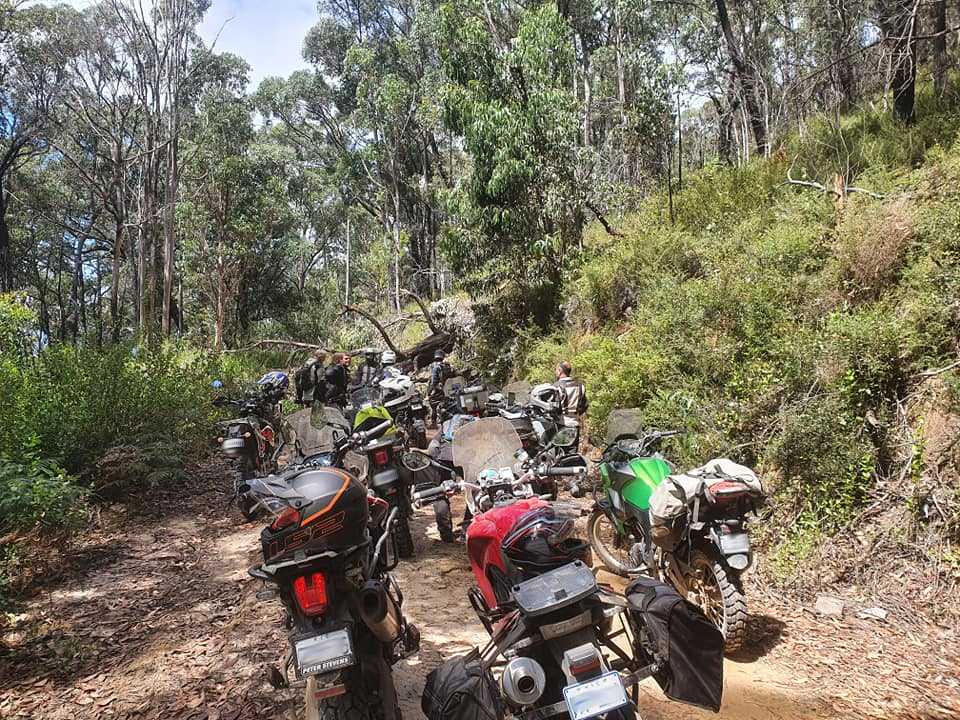 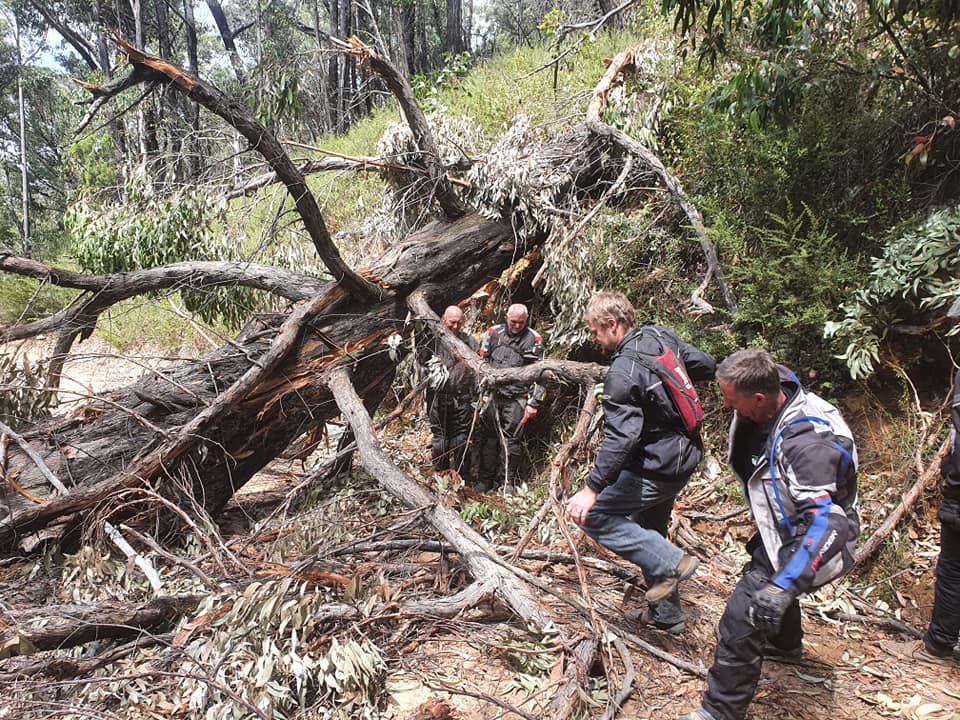 Trip leader Robbo and Victor somehow made it to the top without incident, but it was hard going for the rest of the crew, with bikes spitting rocks and landing all over the track and up the bank on the left. Most bikes got away with minor cosmetic scuffs, with the exception of Stephen — his beamer now not allowing the easy selection of gears. Harold’s Triumph was telling us to check its engine, a lookup of the codes revealed that its traction control was a bit confused about the bouncing and spinning on the way up. 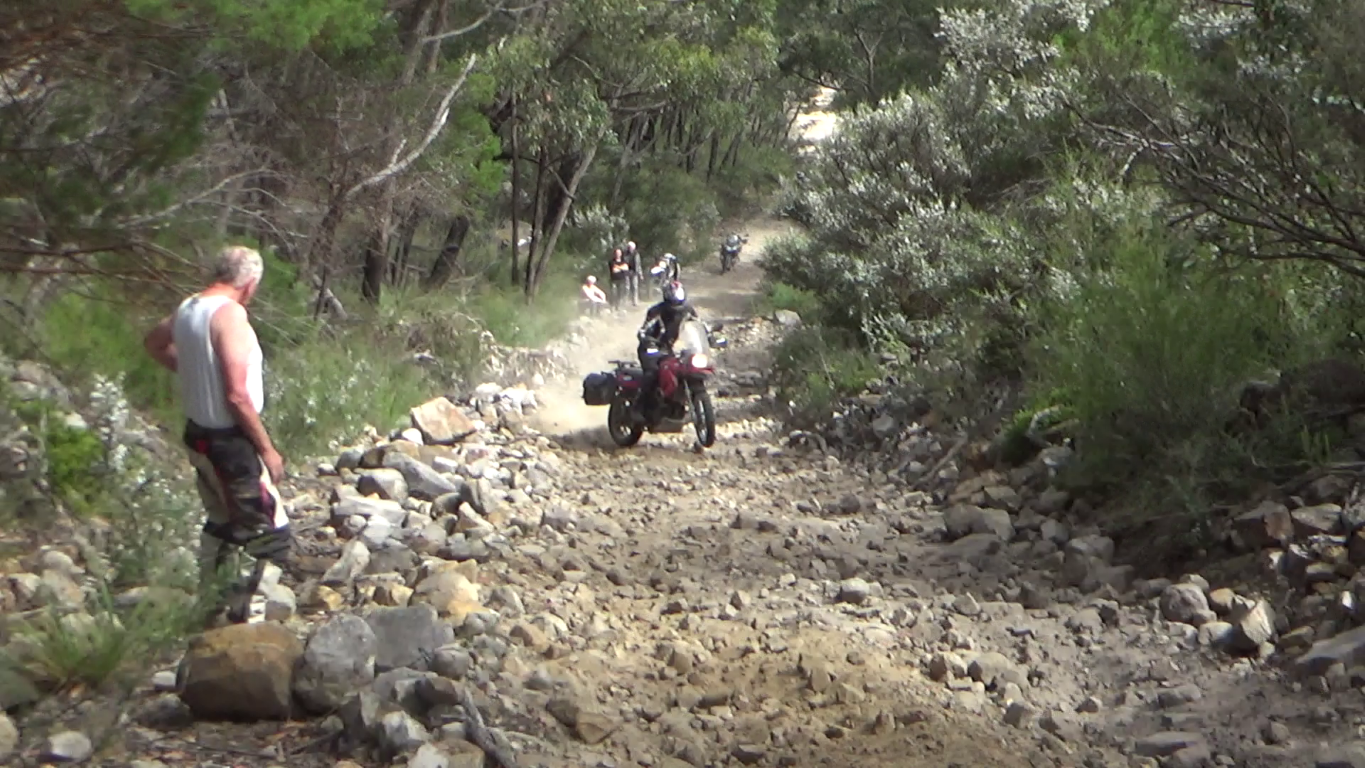 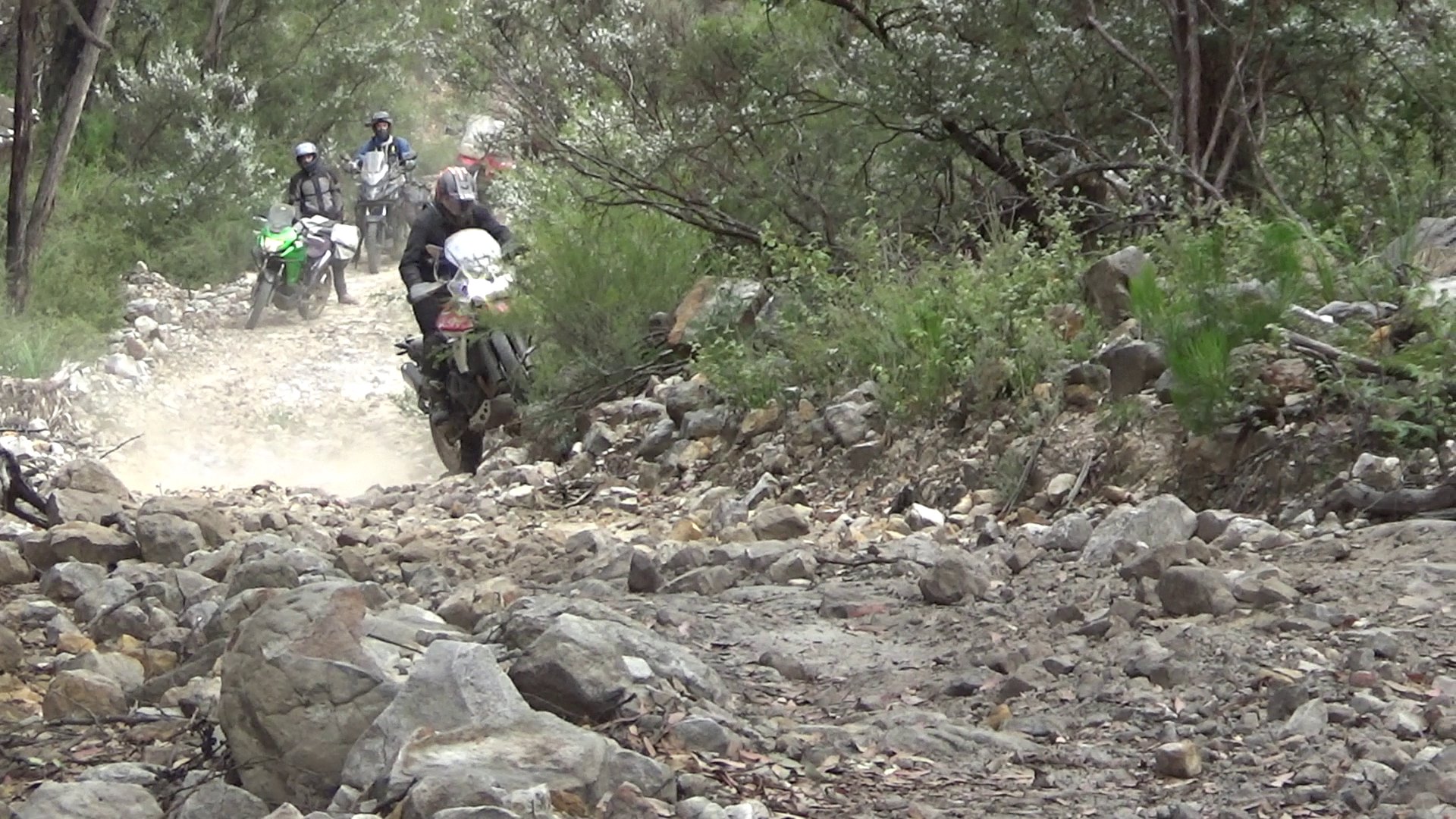 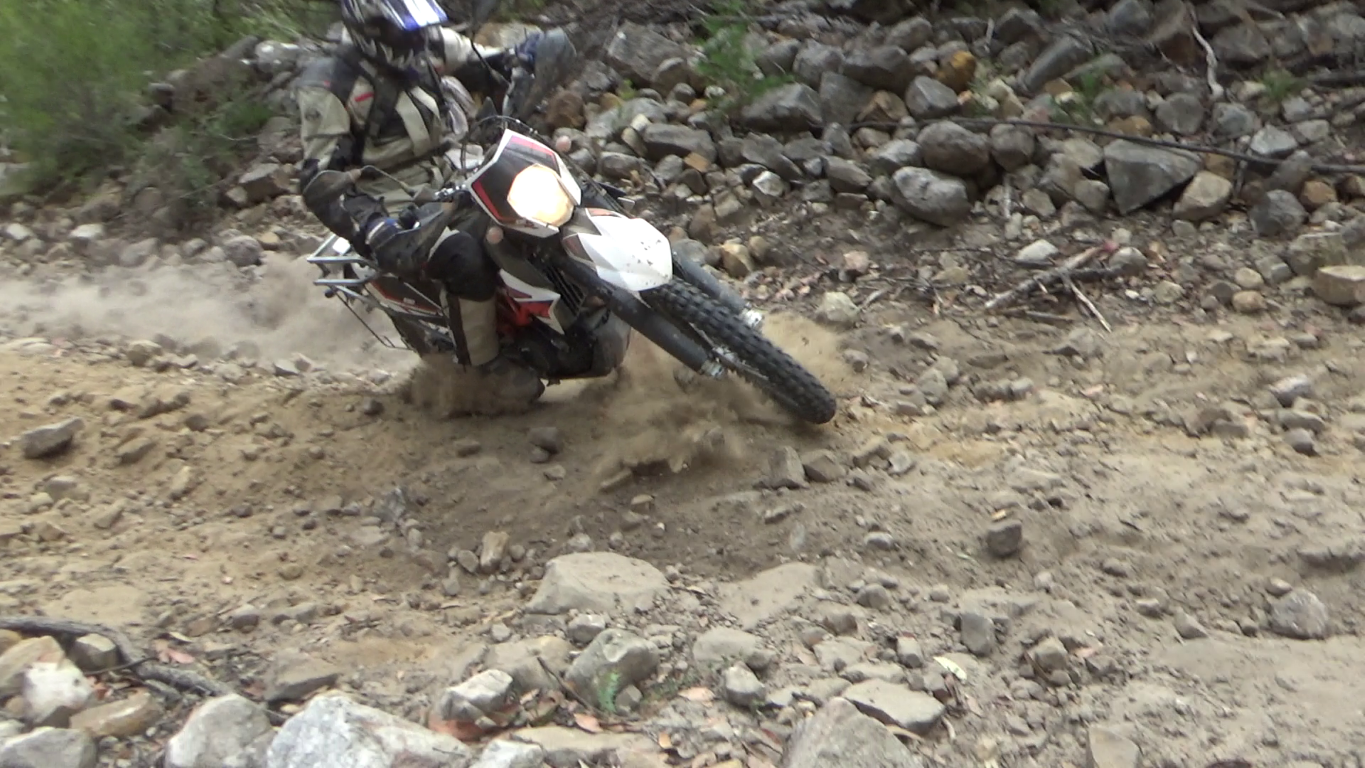 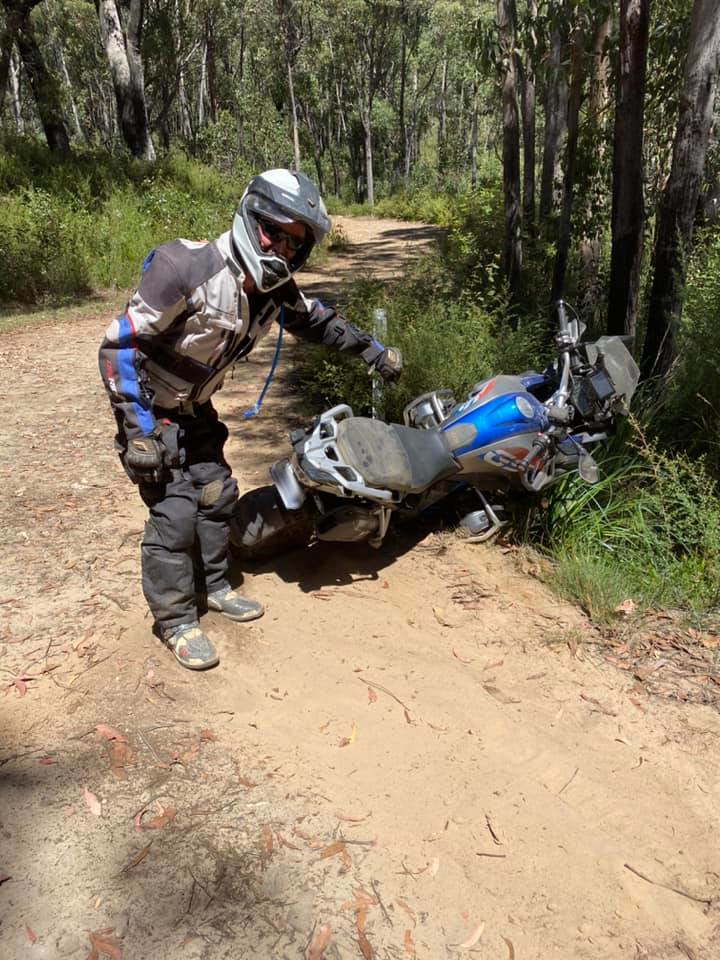 We continued along the trail, a couple of challenging sections. Time had gotten away from us so we had to take a shortcut route back to camp for lunch.

After lunch, we had a ride around a northern loop with some excellent scenery looking out over the valley below. Vinegar was the topic of conversation around the table at the pub that evening. It’s probably best if you ask someone present about the specifics.

Monday we packed up, cleared out and headed for home. Colin and Rolf remained and re-did the southern loop, apparently we missed quite a bit of good riding. We’ll have to make sure we cover that off next time. Gregory’s bike was a bit nosier than usual, which was a result of lack of oil, so a return trip to Ballarat was necessary to get it topped up so that it was safe to ride home. 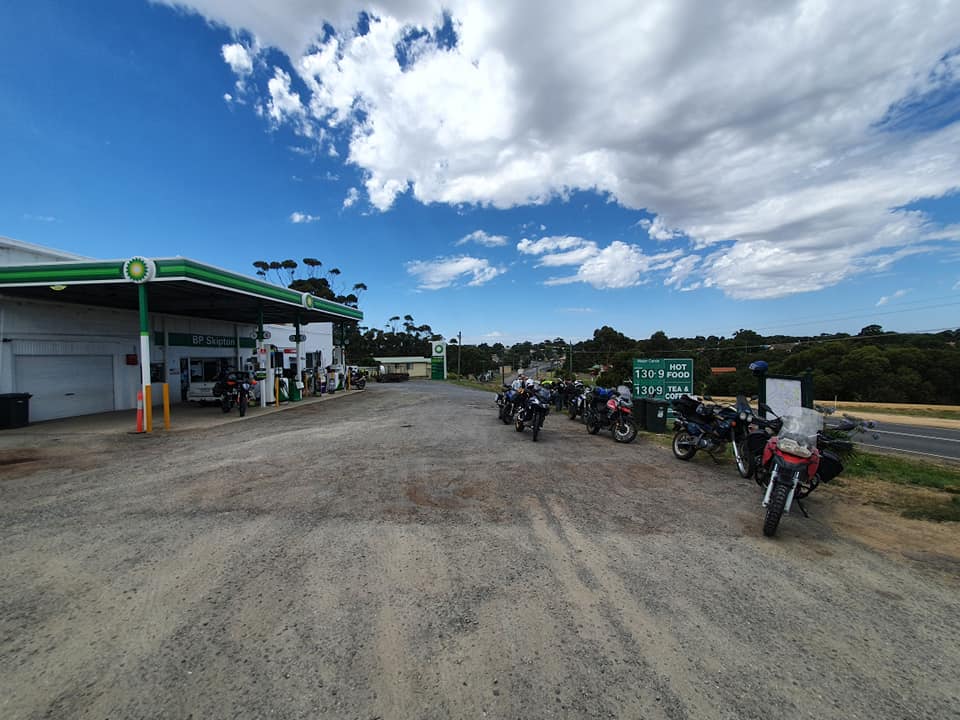 While the MADCAT group headed to Goat Track Rd, Gail and Jonathan turned around to avoid the carnage (after Gail ate some sand first) . The couple took an easier unpaved route and  visited: 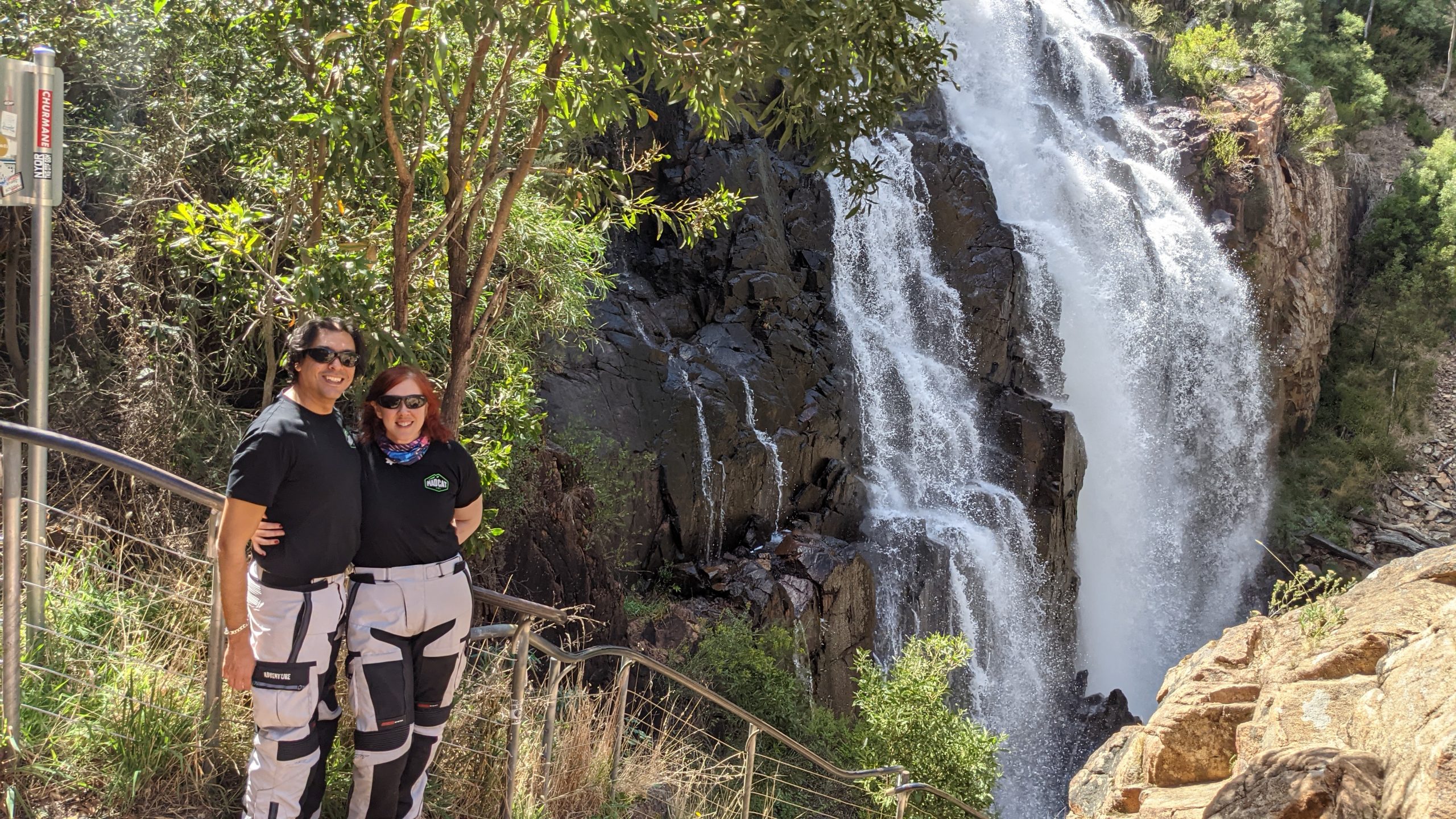 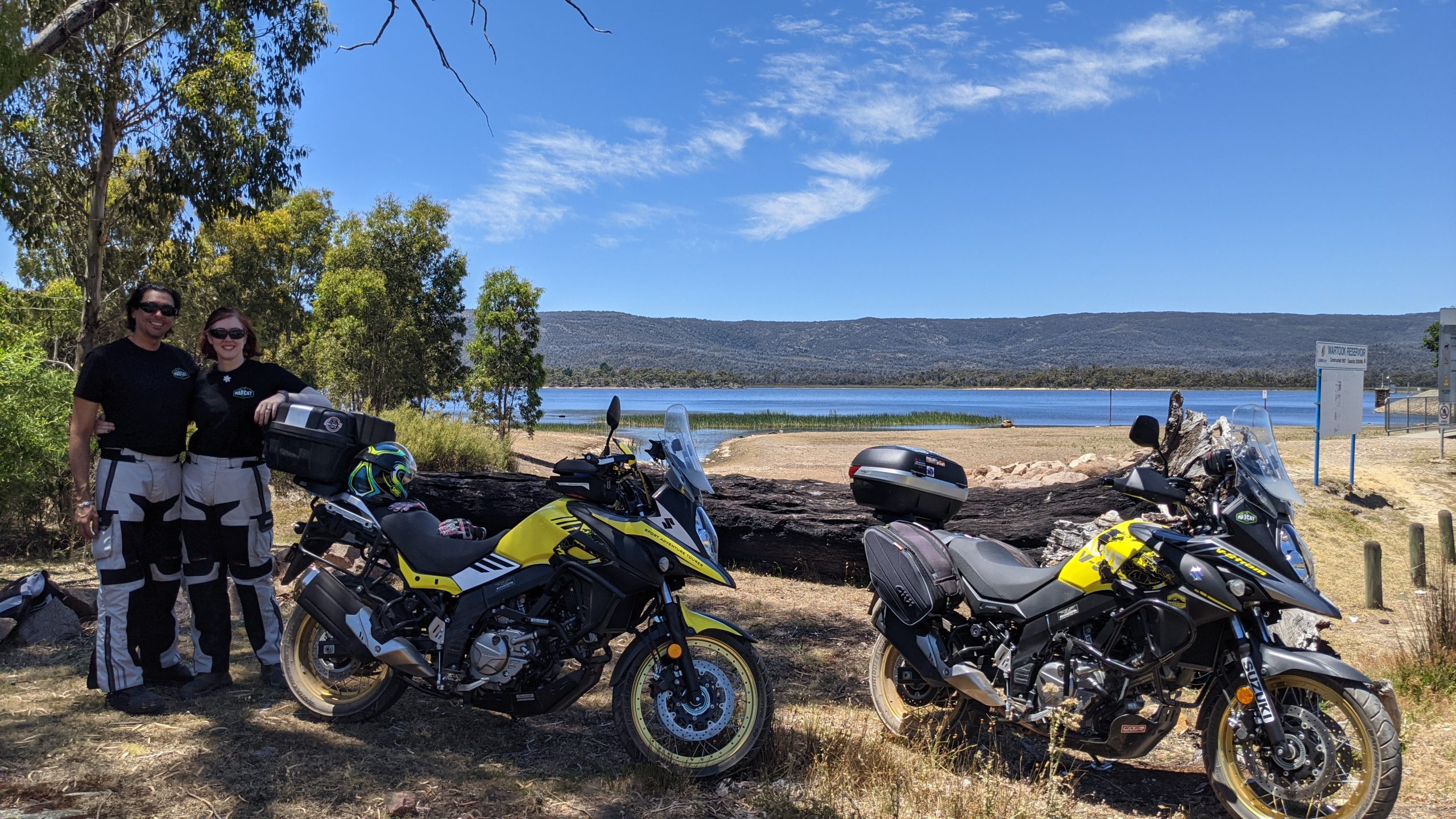 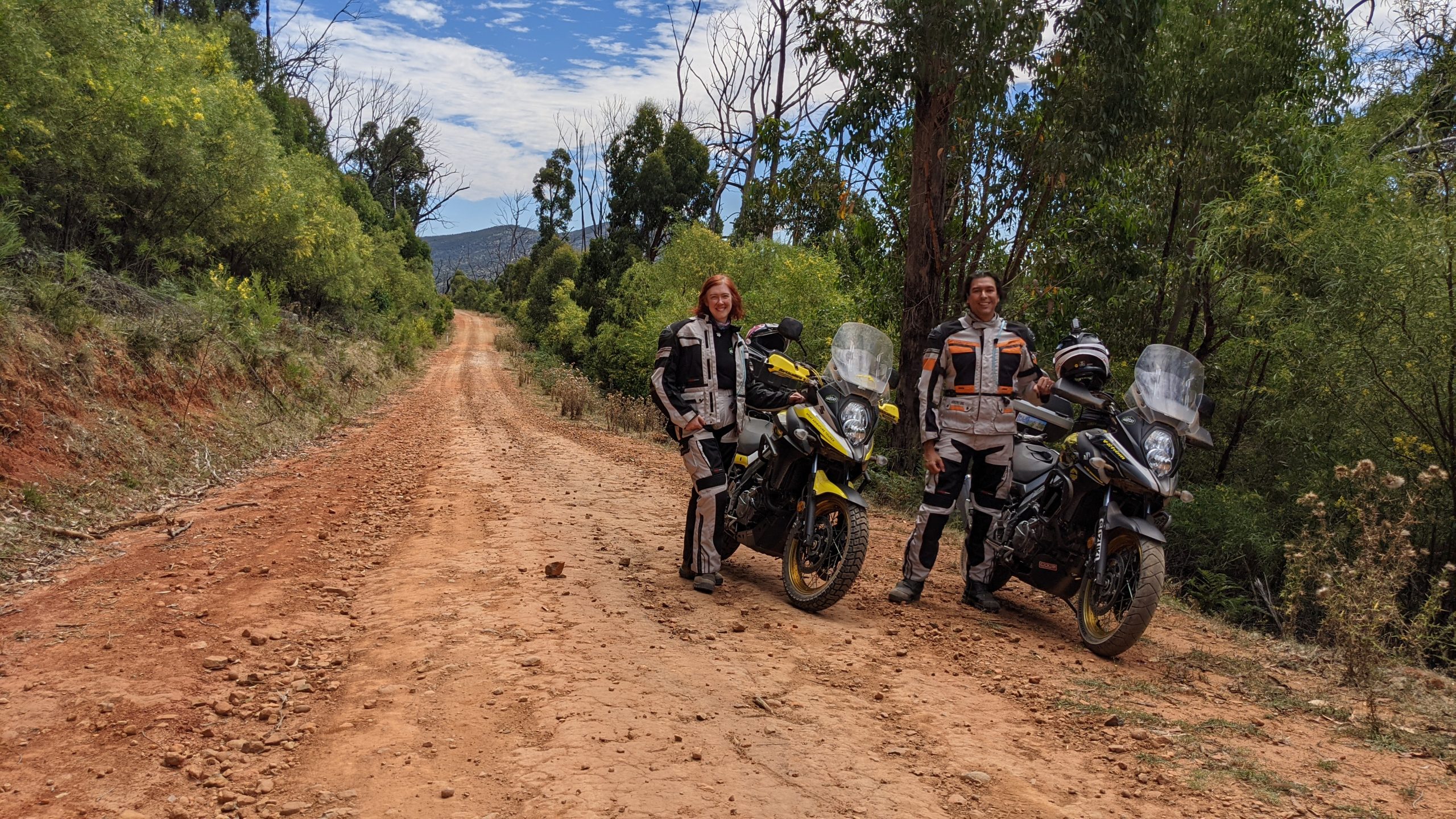 Then headed to the campsite and met the rest of the club.