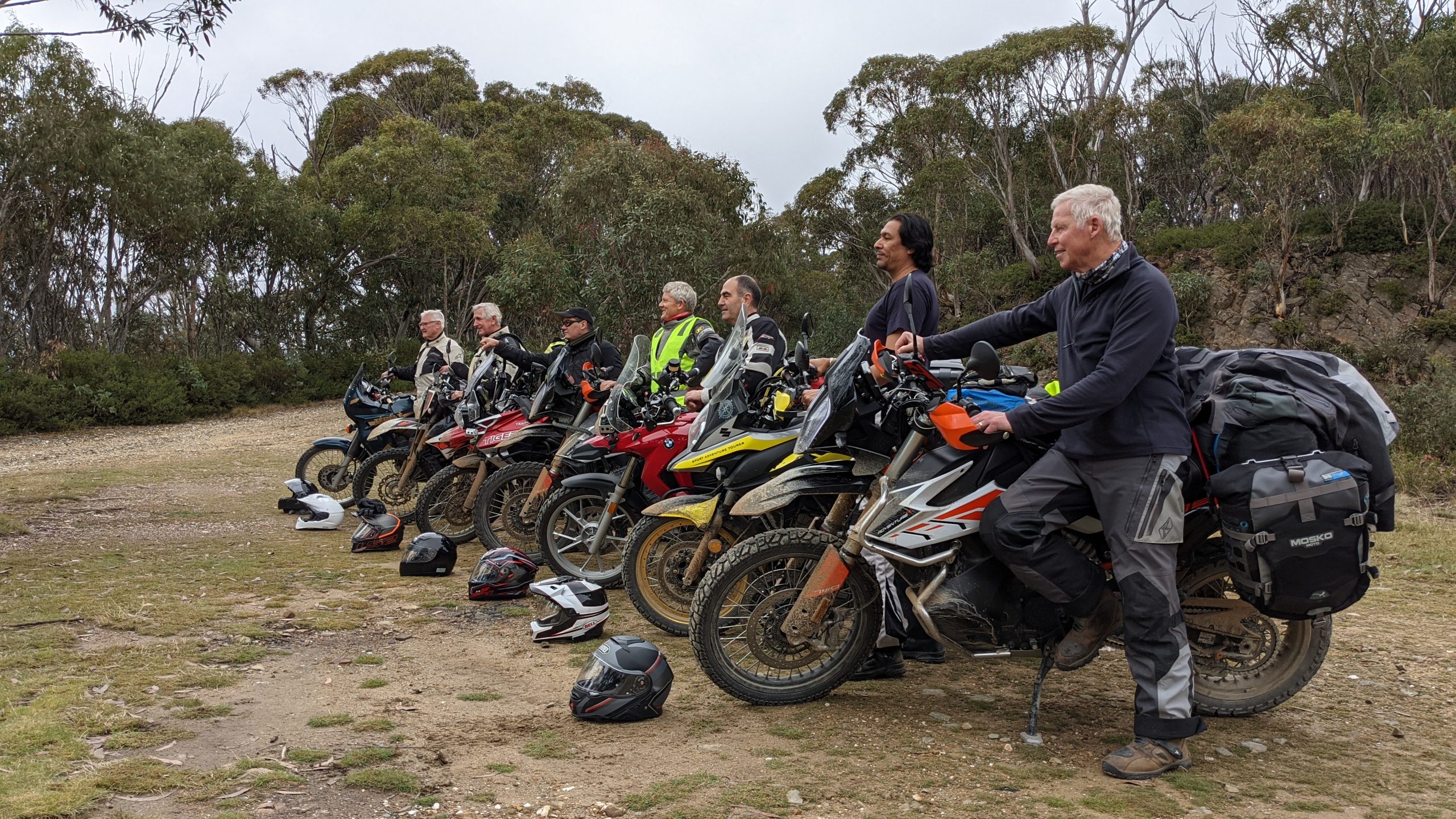 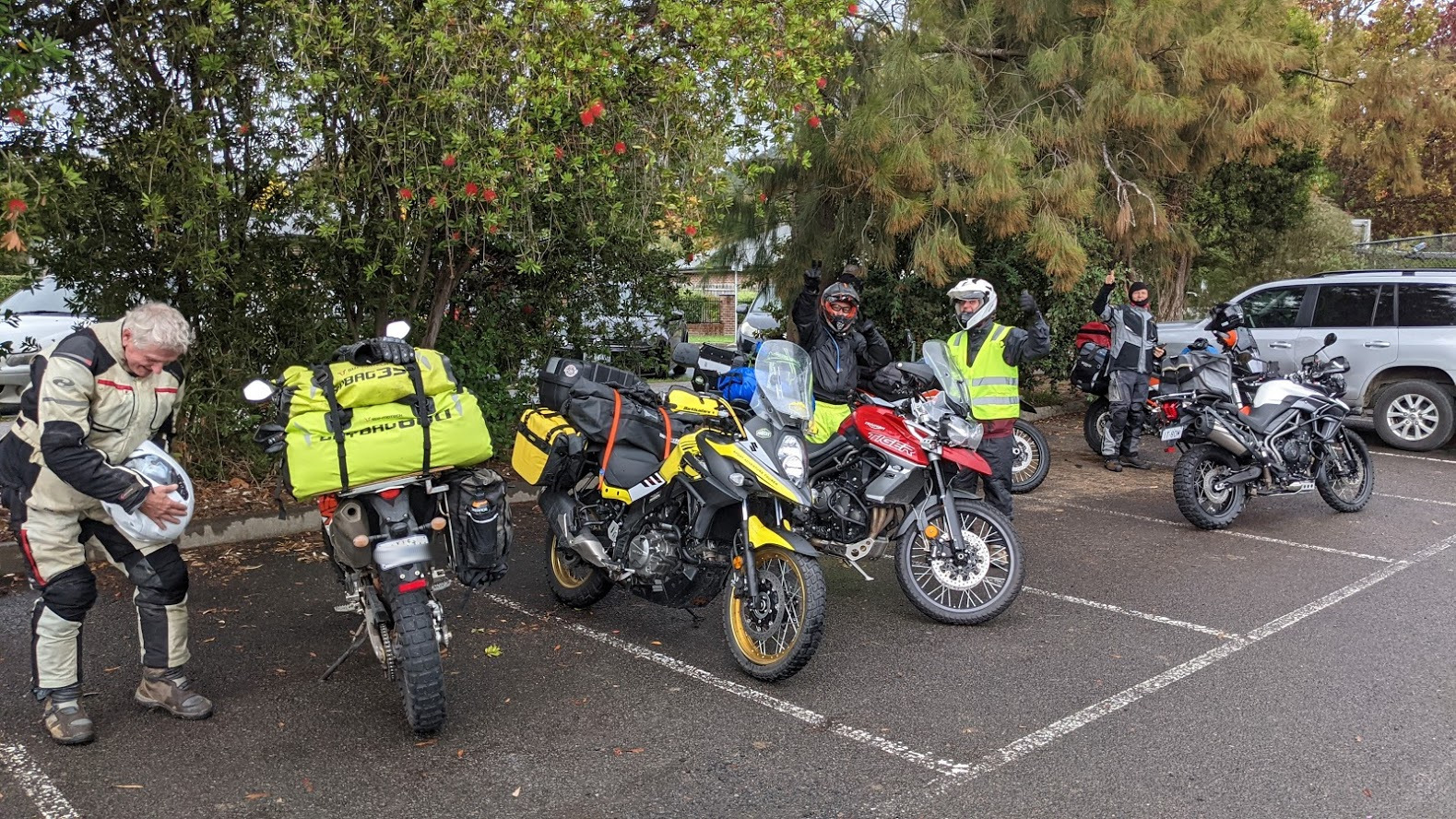 After a dreamy low- 20’s temperature the day before the Bob ride, the heavens opened in Melbourne about 7am on 27th March and it looked for all the world like a miserable mid-winters day as six hardy souls, of the original 17, sloshed their way out to our rendezvous point at Yarra Junction for a three-day-ride on mixed surfaces. At its conception, it was, in the mind’s eye, imagined to be a mid-Autumn ride, when the weather is at its balmy best: warm still days, dry roads, native bush, a campground on a river, and a hearty pub meal each night.

As Taylor Swift says. “Just because you make a good plan, doesn’t mean it’s gonna happen.” The plan for day one was to ride up through Reefton to Cambarville on the narrow, wormy blacktop and then take the Warburton Eildon Road, a well maintained dirt road populated by logging trucks mid week, and then circumnavigate Lake Eildon in a clockwise direction, and end up at Jamieson.

Roadworks and closures meant we had to take the Acheron way to Marysville, and despite the weeping skies, the ride was a lot of fun, and while there was plenty of the wet stuff, the track was not particularly slippery. Starters were Robbo, Jonathan, Harold, Tim, Simon, and Colin, the last of  who, despite our threats and entreaties, was still the last to arrive at the rendezvous…. but this time only ten minutes late. At least the thimble-sized fuel tank was full this time, but most of his large load was strapped above the pillion seat like the Leaning Tower of Pisa. And him an engineer….. you have to scratch your head in wonder. However, the guy could ride a trike with a flat tyre through an Afghan mountain pass, so the lousy weight distribution didn’t seem to bother him.

Stephen (you’ve got to be kidding) had to stay back and start the ride in Richmond a couple of hours later because he was bidding on a pocket-handkerchief sized piece of dirt that, had he been successful, would have gone down in the annals of history as “world’s most expensive garage.” Reason prevailed, and he was left behind in the frantic bidding of the inner-city wanna-be’s, who are happy to sleep standing up in a broom cupboard. David also took the sealed road to Jamieson after a late start and both arrived looking crisp and clean after a dry ride on the Macadam. A lot to be said for keeping gentleman’s hours. 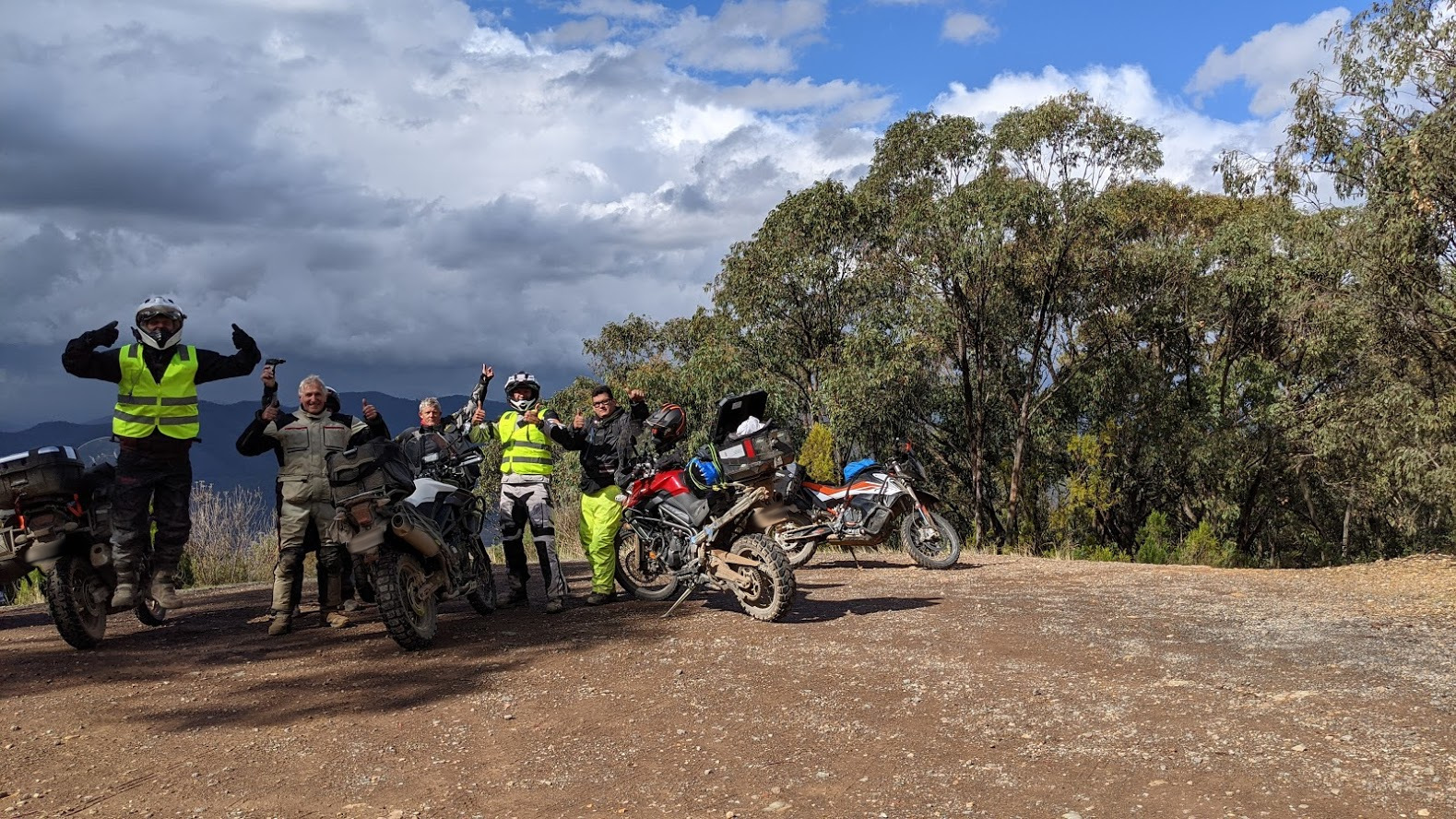 For the rest of us, apart from soggy bottoms, the ride was enjoyable and uneventful  under leaden skies, up until the time Robbo realised he had a rapidly deflating front tyre….. a pinch flat resulting from hitting a rock when hurtling along at warp speed, trying to escape Colin’s hot breath on his neck. Aha. Joy. A chance to put into practice the tyre-changing workshop of a month ago. But as  the great baseballer Yogi Berra said “In theory there is no difference between theory and practice; in practice there is.”  A  prophetic statement if ever there was one. The wheel came off, the seal broken, the tube removed, a new tube placed (difficult), the tyre re-inserted inside the rim (more difficult) and then inflated with any number of electric pumps (impossible). The tube had been pinched (no one taking ownership) when levering the tyre back onto the rim. Plenty of expletives later, tyre off a second time, original tube patched (thanks to Harold’s know-how from riding pushies around Colombia as a kid and his vast array of tools), the tube re-inserted again (even more expletives as we struggled to get the valve stem through the wee hole, and then much more care taken with the tyre levers to complete the job. Air, and at last the thing is inflating, about an hour and a half later. Not quite the four-second F1 pit stops for four new tyres and a full fuel load. 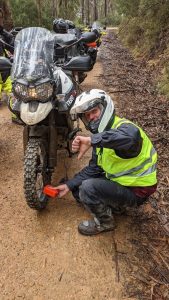 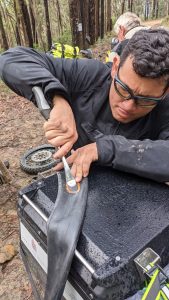 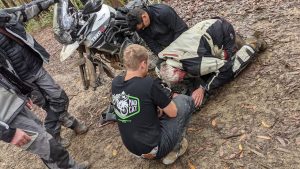 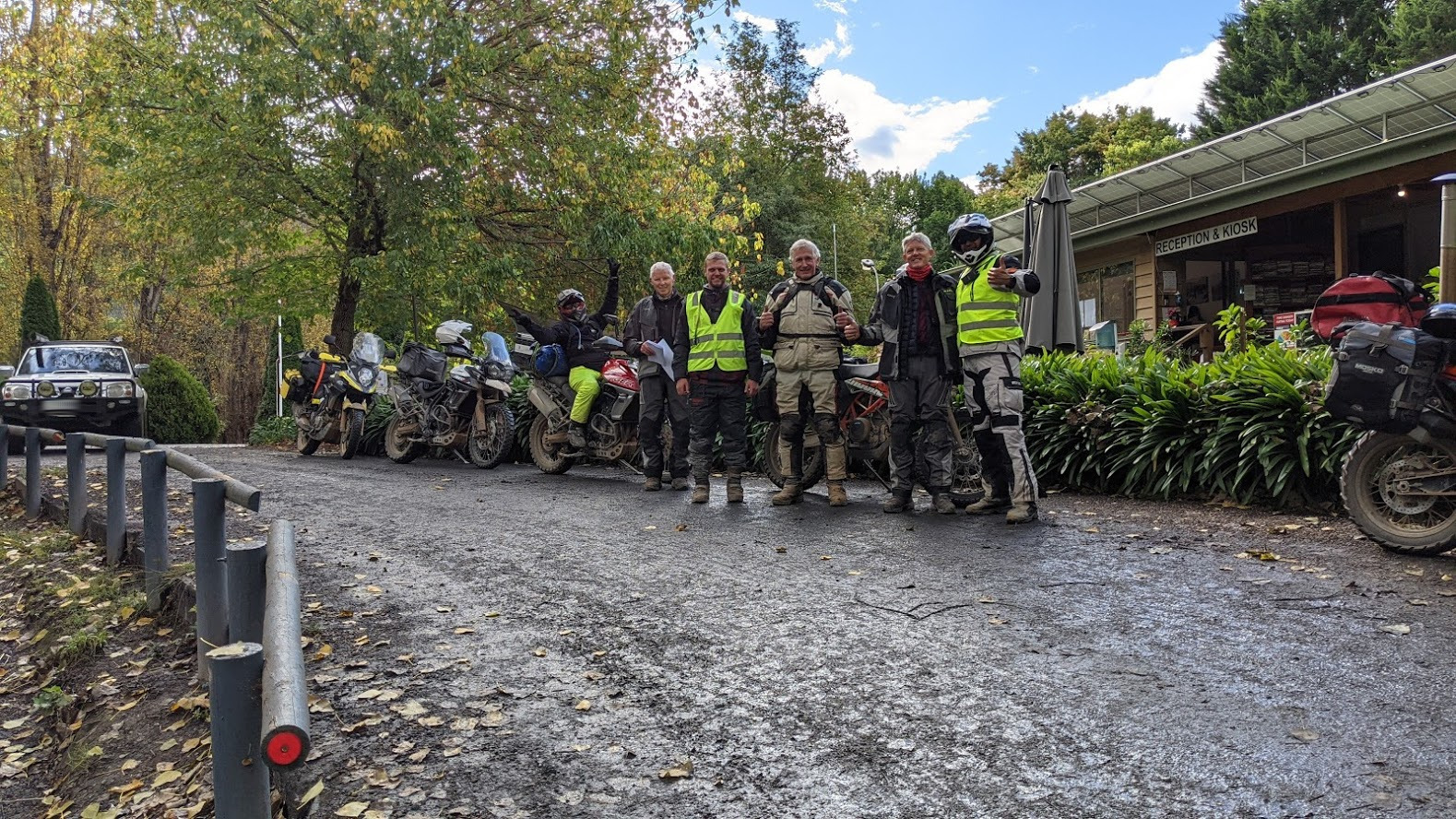 With that, we rode the last 10 k’s to the Eildon-Jamieson Road, and with heavy rain predicted and visible over Mansfield, went straight to Jamieson rather than riding round the lake via the Skyline Road. There we were met by the groomed and coiffed Stephen and David, who looked like they had spent a day preparing for the ”Best Dog in Show” .

Accommodation was a couple of dry, warm cabins which meant no tent pitching or un-pitching, and an early visit to the pub, where they served, amongst other things, Olympic-sized lamb shanks and MCG sized steaks

I was interesting  to see how Harold was talking about his new more healthy diet and smaller portions, when a 1/2kg steak plus sides were served for him to devour.…proper country fare! 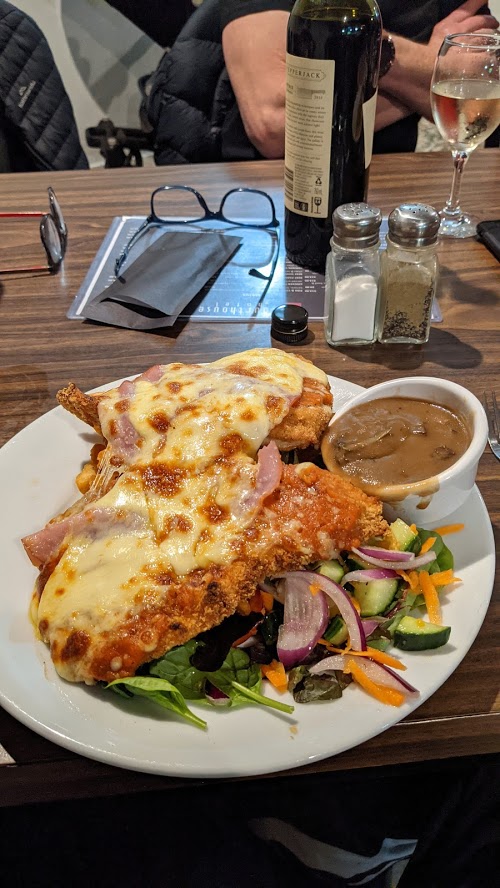 The name of the ride

After everyone’s tummy were happily fulfilled with copious amount of food and booze, we head to the cabins, just to realise that there was a big party no far from were we were, so we though some wood to the firepit in our area and start chatting, relaxing and contemplating how nice the day was. All of the sudden Collin, with a very confused voice and very slowly  says “who is Bob Seeeeger?”, we all laugh a bit and reply “the singer”, “Turn the page”, “Main Street”, “Night Moves”, “Against the wind”, etc. yeah, yeah, yeah, I know , that’s Bob Seger, not Seeeeeeeger… sudden silence, Tim check on Goolge almost sure that it was Seeger, just to realise the typo has been carry on the hole time and we name a ride to a unknown Bob Seeger song.  Many laughs were shouted on the spot, well played Collin well played. 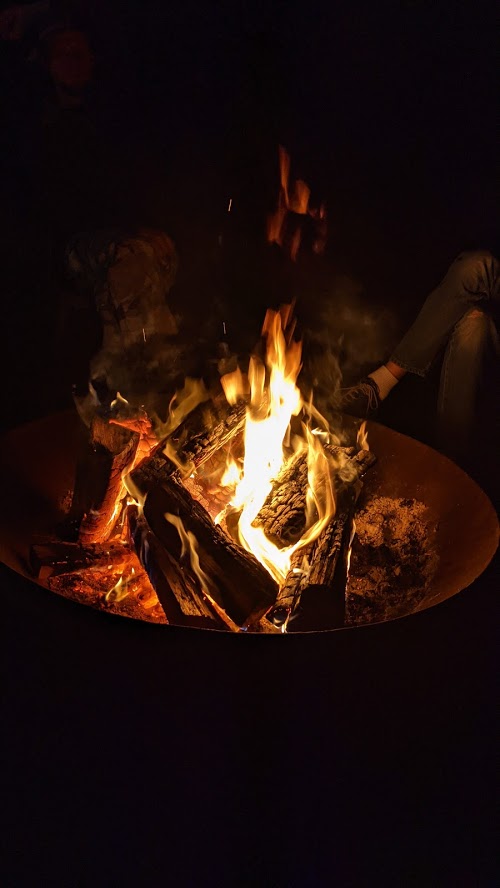 To Licola and beyond

The next morning saw everyone clear of head and excited about a day of dry weather riding to Licola, and then down to Paradise Valley Camping Park… with the exception of Robbo. He was to be seen staring glumly at his front tyre which was flat again… but for the optimists, only on the bottom. It had deflated overnight and signalled the end of the trip for him via a careful ride home on the road much-travelled. 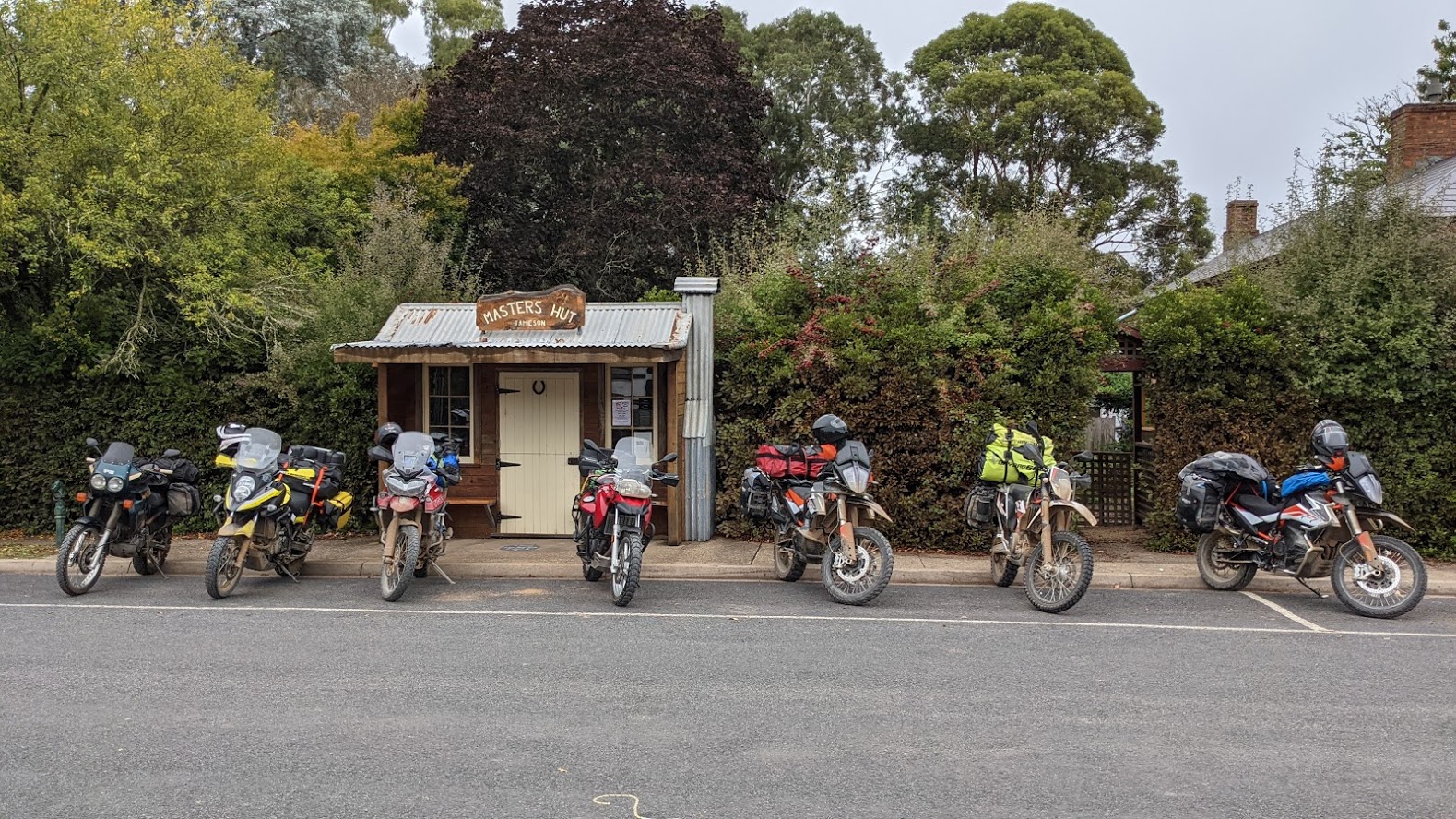 Simon led the group in Robbo’s absence and Jonathan very kindly accepted the Sweep role as his lot for the whole trip.

Leaving Jameson, as we passed some paddocks in morning fog, we could see a flock of kangaroos jumping away from us. Later on the trip there was cattle on the road. Just there, at an arm distance from us. Somehow someone changed the animals on this trip.

We spent time climbing to considerable altitude where breaks in the snow-gums showed the clouds carpeting the valley floors below us and breaks of dazzling sunshine above us. 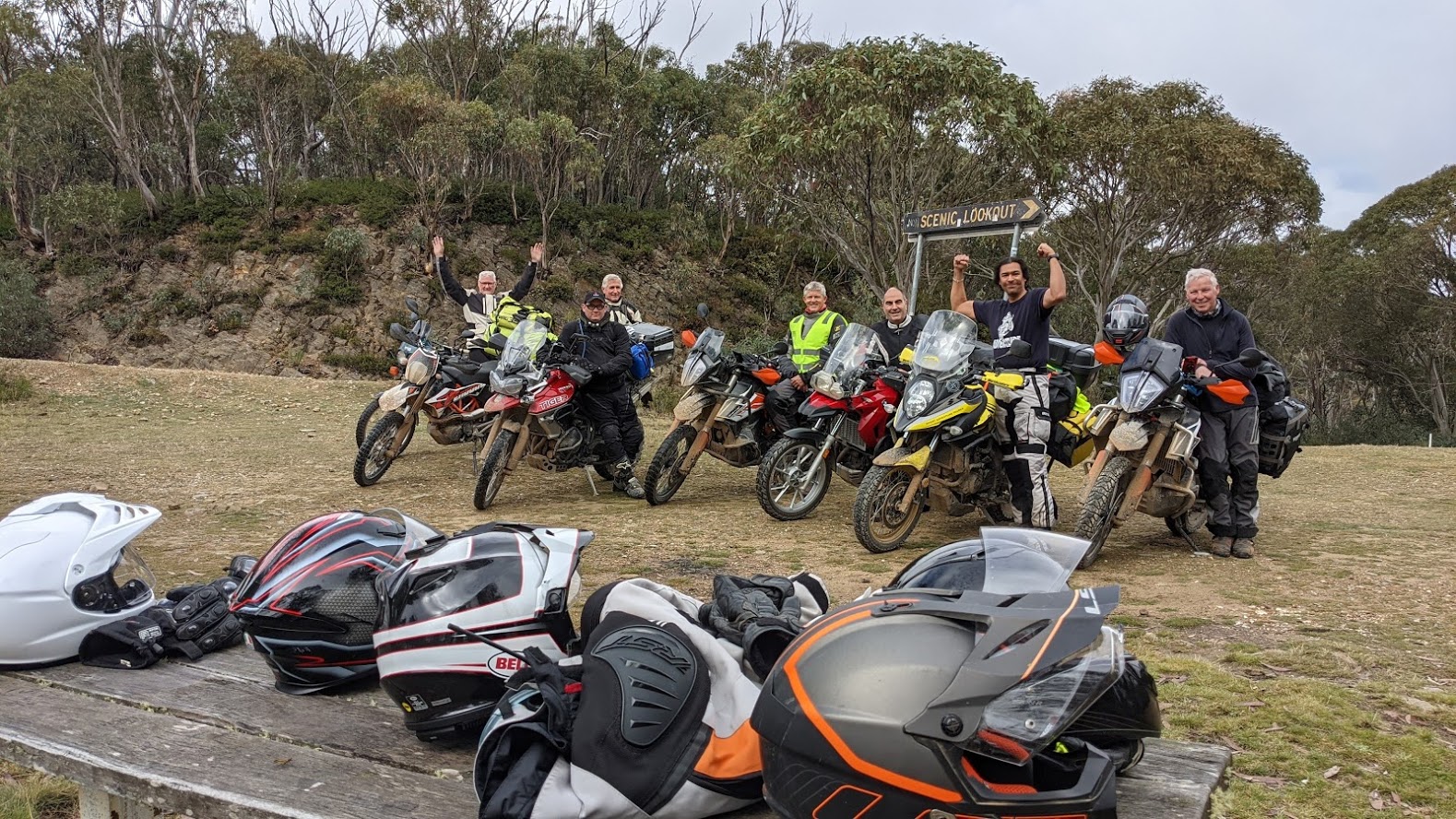 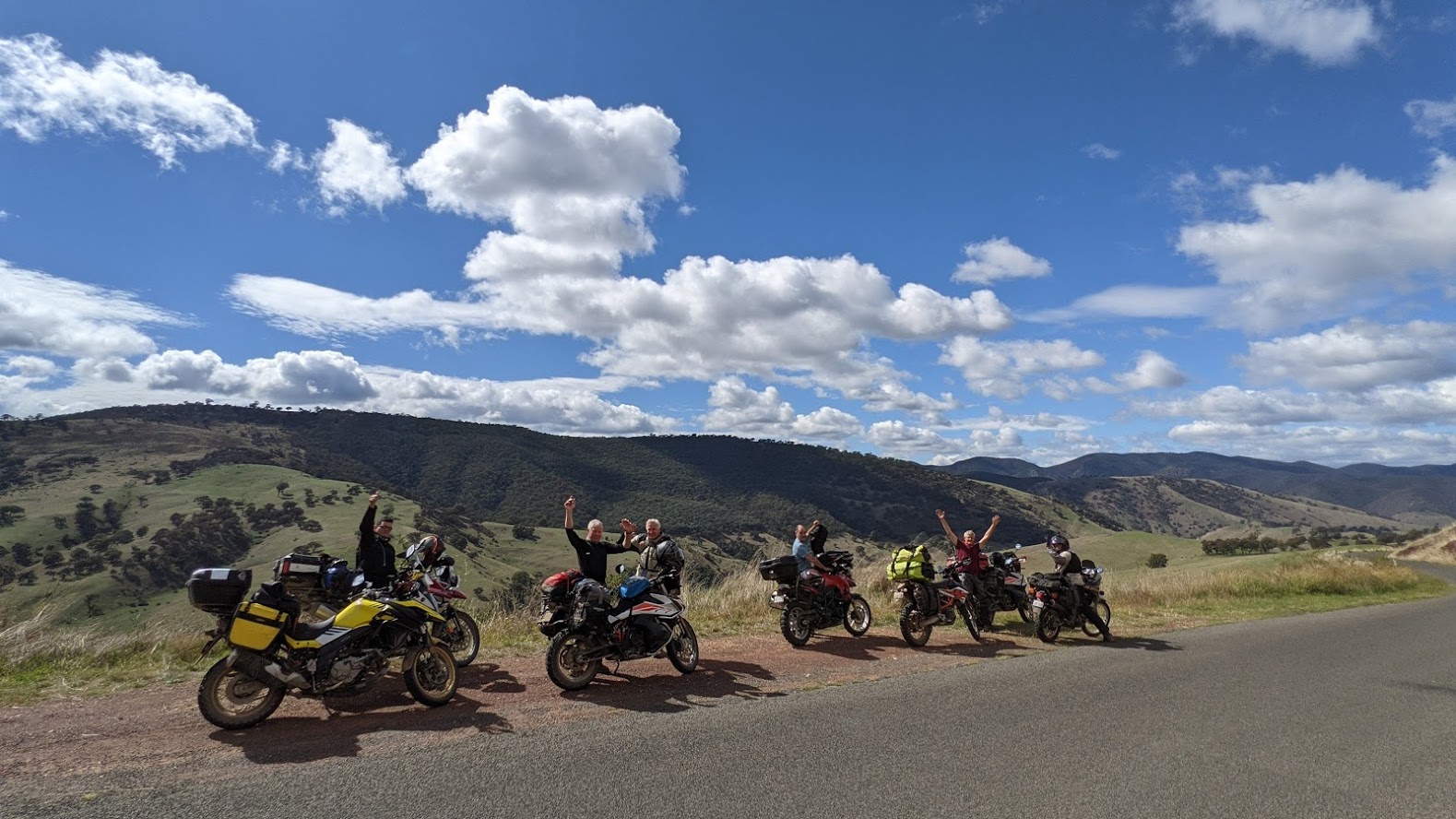 The last 20km into Licola was a series of beautifully cambered squigglies that just invited you to attack them as you descended into the valley of the Macalister River. We had to do a “loaves and fishes” stunt with the last three pies and pasties at the Licola general store for lunch. 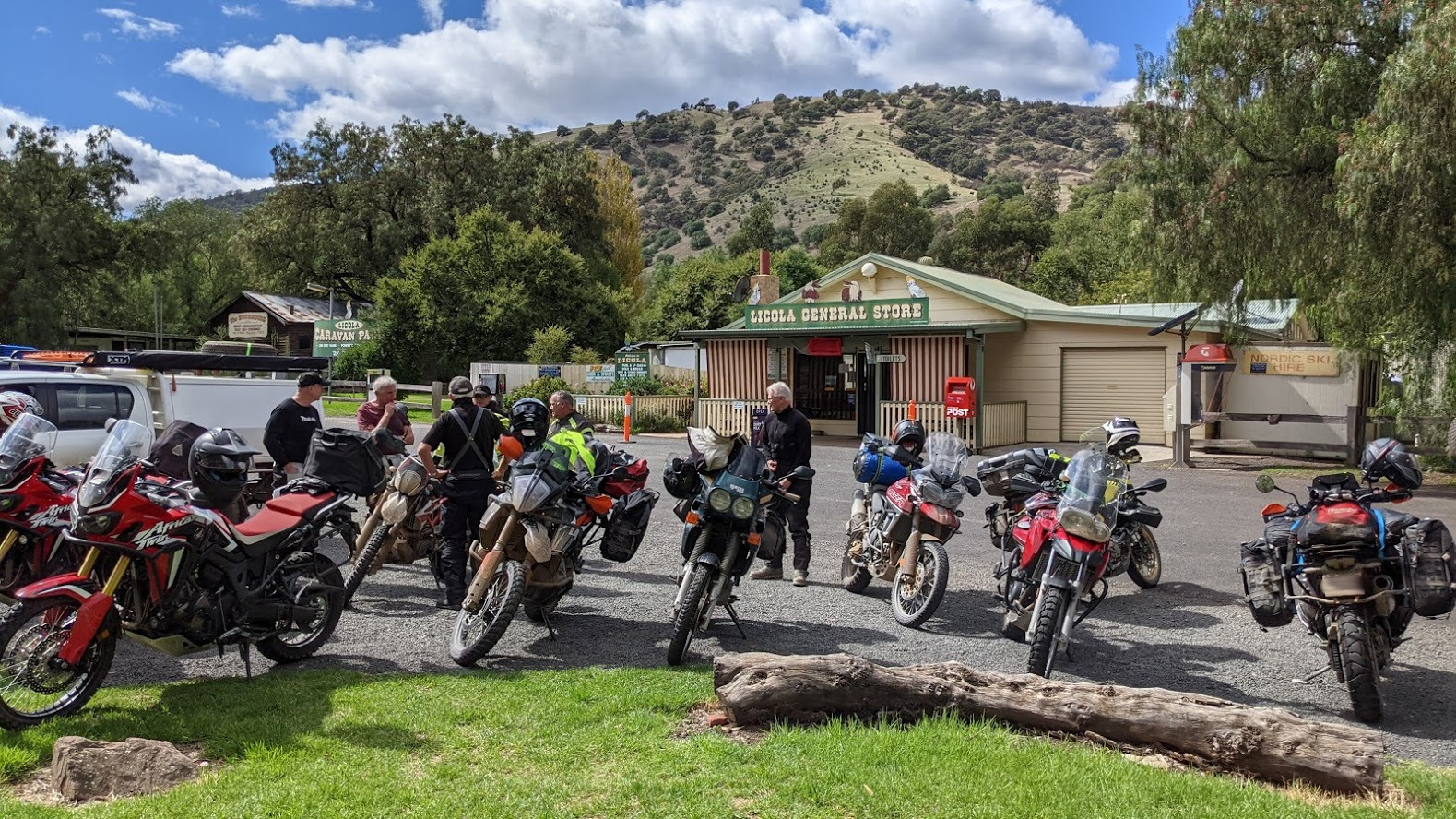 And then on to the Camping Park where a verdant valley floor adjacent to the river was the setting for our second night, and we were warmly received by the camp owners Cheryl and Steve. It’s fair to say, that since Covid, Victoria’s urban dwellers have re-discovered their bush: they’re out there in droves. However, being a Sunday night on a non-holiday weekend, we had plenty of space to spread into and avoid the chainsaw massacre that was the snorers. 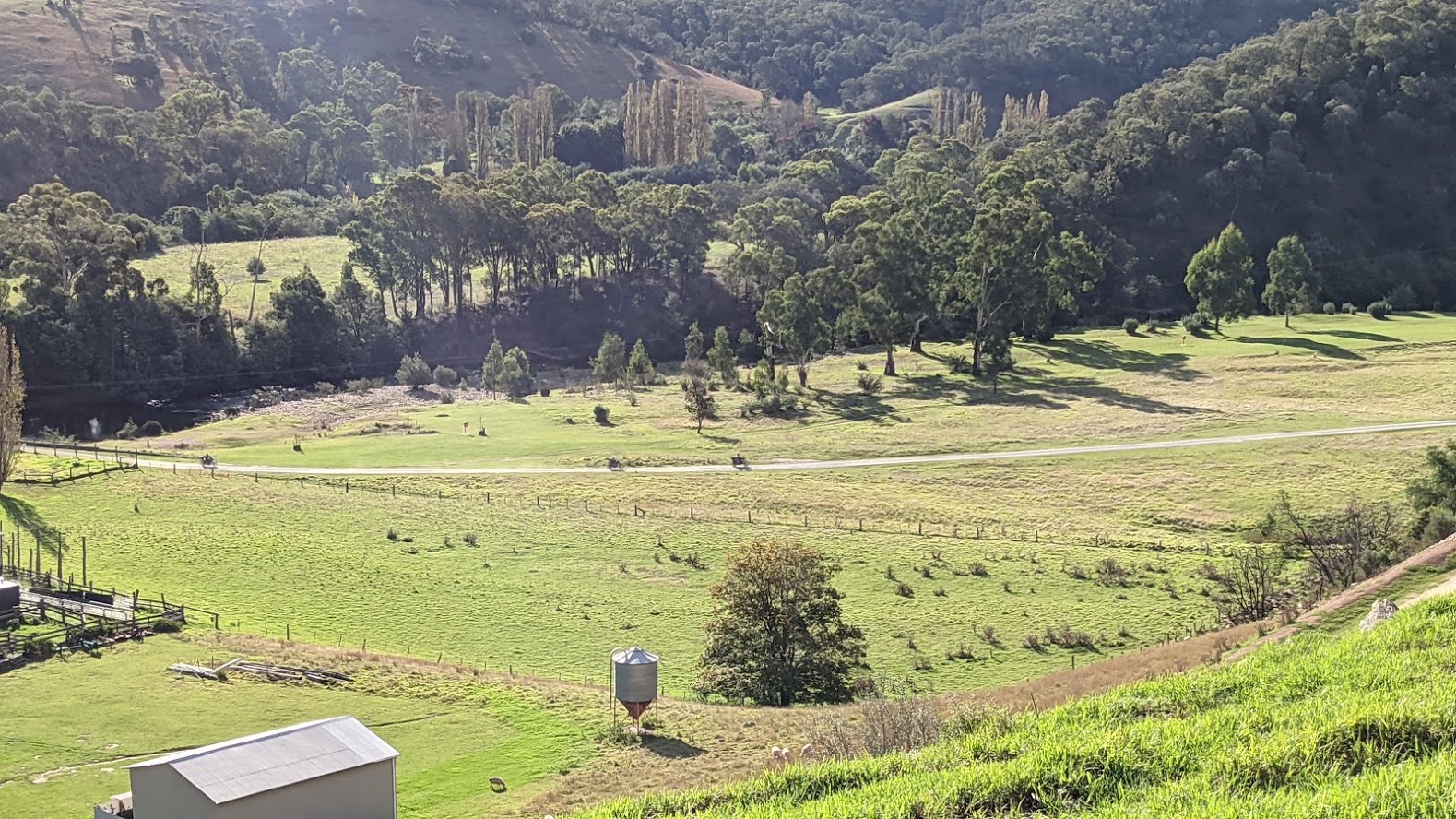 We cancelled the bus trip into Heyfield for another pub dinner and instead rode in, picked up some supplies, begged and borrowed tongs etc from other campers, and had a charcuterie feast followed by sausages in bread with fried onions, barbeque sauce and lashings of good humour fuelled by alcohol and bonhomie. 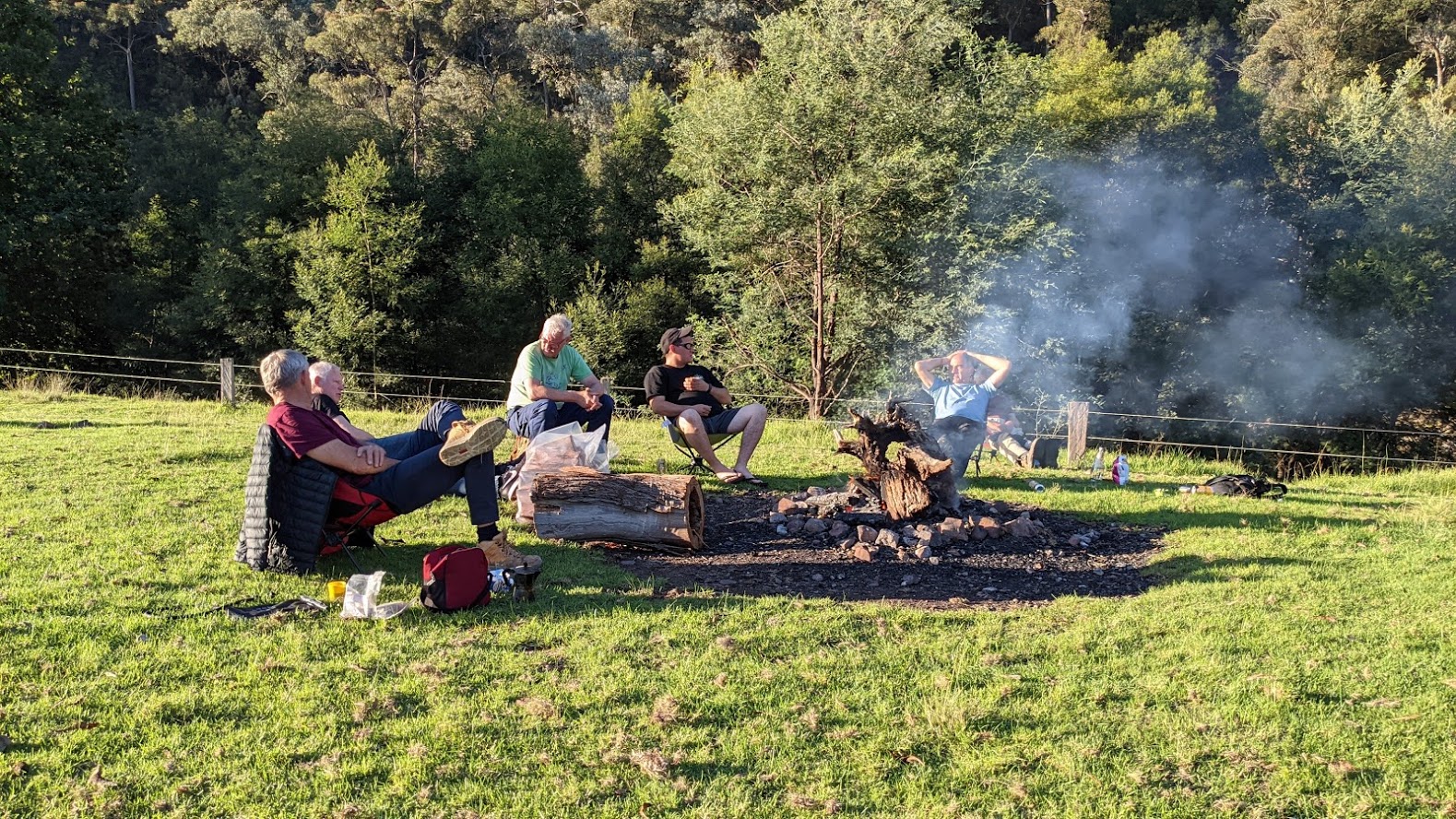 A roaring campfire is a warm focal point on a full-moon night and becomes the bush TV when the conversation flags. Before dinner, Colin puts on a command performance by riding up and down a goat track that got steeper the closer you got to the top and looked pretty forbidding to the rest of us. He and the 690 are joined at the hip, Siamese twins. He made it look easy peasy lemon squeezy.

There were some experiments in the camp fire, thanks to the logs brought by our adventurous team. at the back of the bikes.

Those big logs extended the campfire for a while. Jonathan and Harold kept up an unbroken stream of Spanish for hours after the rest of us turned in! I’m sure they’ve mastered the art of cyclical breathing. 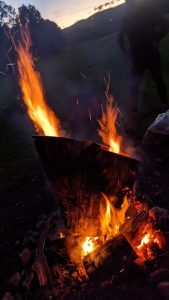 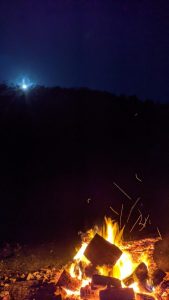 The final morning is a grumbling start to the day, especially for Stephen who seems to object strenuously to being woken 10 minutes after first light, with the language of a bullocky almost vaporising the walls of his cute little dome tent. Braying a stream of expletives like an unhappy mule did him no favours. We soon got him to forsake the comfort of his feather bed.. in search of revenge…. a dish I reminded him, best served cold.

A calendar is a more effective time-piece than a stop watch when Colin packs up…he takes forever… the absolute antithesis of what he is on the bike. Harold, another green bottle to fall off the wall, is an early departure via the freeway as the daily grind tightens its grip on him and he has to return early for work. Now down to six. We embark on a wet ride on a fast dirt road from Cowarr to Rawson and soon after onto the South face Road which takes us up to the Mt. Baw Baw Alpine Village in thick fog and 5 degrees Celsius. 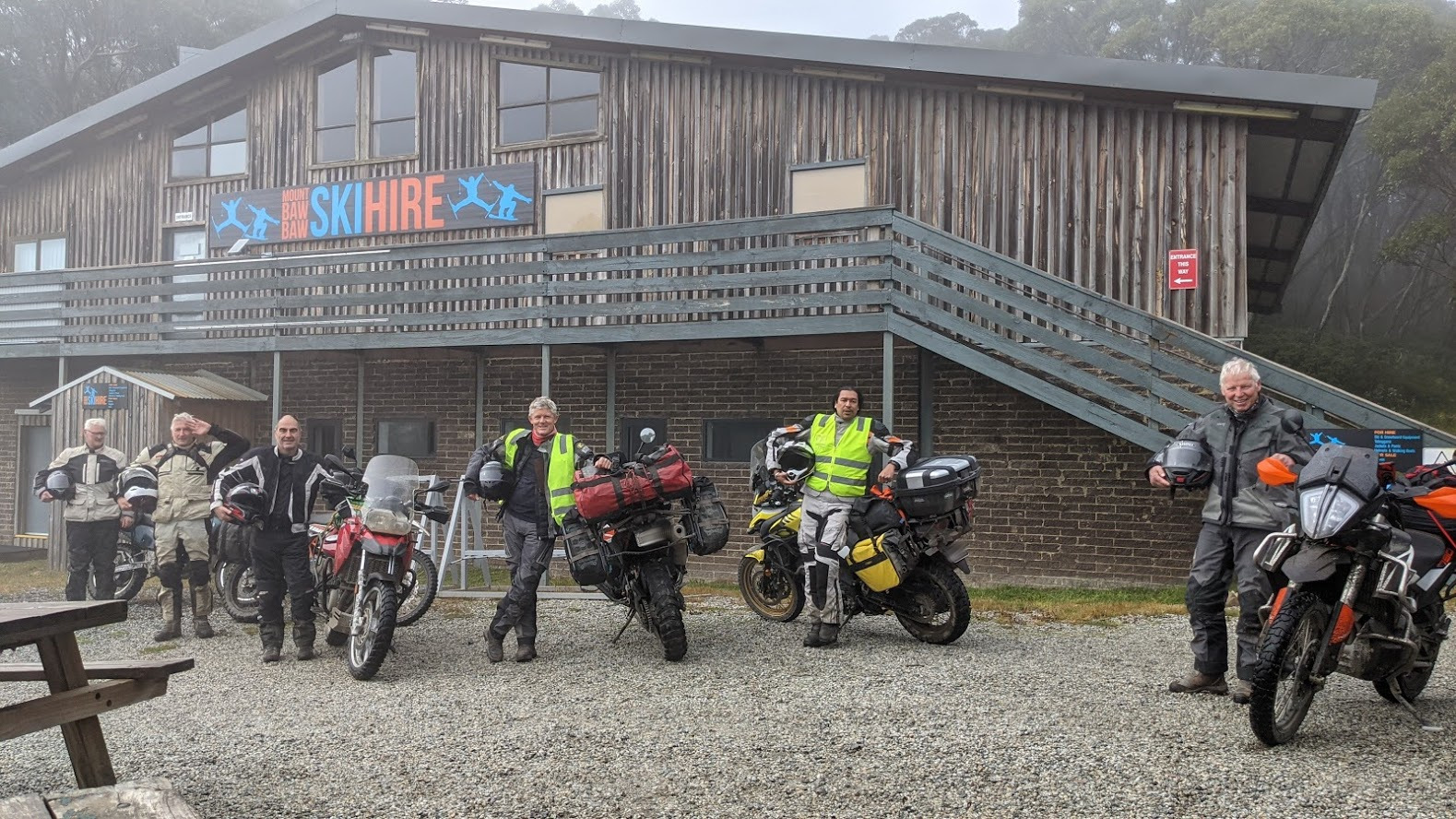 Lunch and then the final purr home via bush tracks and forest roads on a warming afternoon that leaves the air redolent with the scent of eucalypt. The whole trip preserved in perpetuity by Jonathan wielding phone and tripod to wonderful effect. 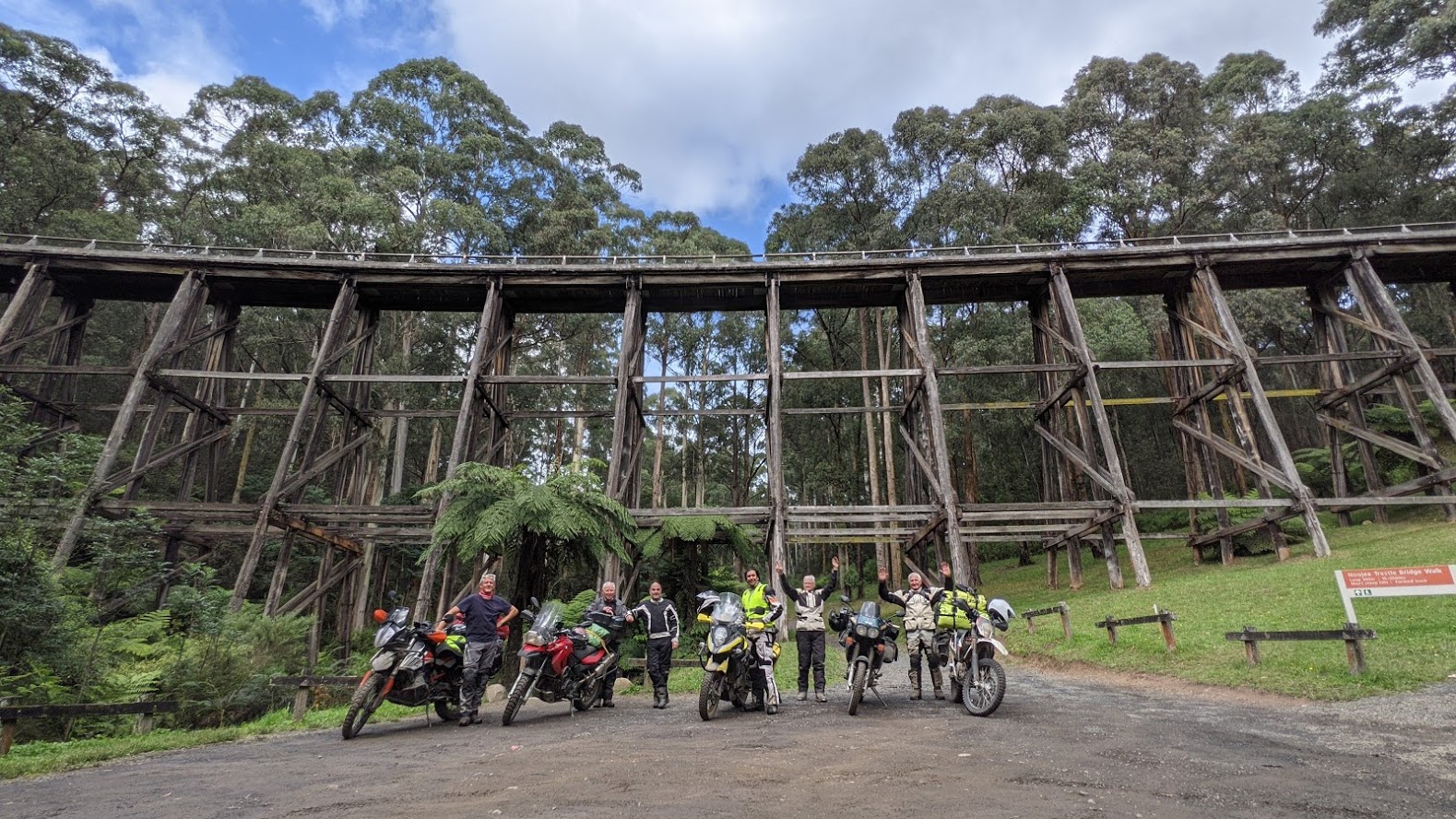 A matter of perspective

Although it may sound like the last day was not full filled with stories, you need to picture the mighty beauty of the place, the road , the light, the feeling.  I can still see in my head a special moment when the trip organiser was going in front of the sweep  and there were a lot of leaves on the road, dry dirt road.  So the brown soil was covered in yellows and red patches surrounded by  trees and mountains of green. As the rear tyre rolls,  the multicoloured leaves lift and float for a second as the bike passes, creating a fairy glitter trace effect , it seemed as the bike was floating in the air by fairy dust. Just like magic.

The day following it occurs to me that the paradox of an adventure motorcyclist’s existence is that it is only when he is riding that he feels truly alive, and yet the more he rides, the less alive he feels when he is not.

Thanks to everyone for making this such an enjoyable “Roll Me Away” Bob Seger ride.