Thirty-eight hours after Covid Travel  restrictions were lifted in Melbourne, and two days before the Winter Solstice, the Madcats were let out of their cages and were roaring to get their claws into ANYTHING outside of Melbourne.

Two weeks of lockdown and primitive travel restrictions saw the Madcats with their claws out. Add to that the better disappointment of a postponed outback trip for over a dozen members, and frustrations were growing… as demonstrated by some of the weird exchanges on SLACK. As Hunter. S. Thompson said “when the going gets weird… the weird turn pro”. Plenty of evidence of that.

The weather gods had a dose of diarrhoea the week before and wreaked havoc in the Yarra Ranges and around the Dandenongs, with 16,000 homes losing power for several days and many roads closed due to washouts, landslips and fallen trees. 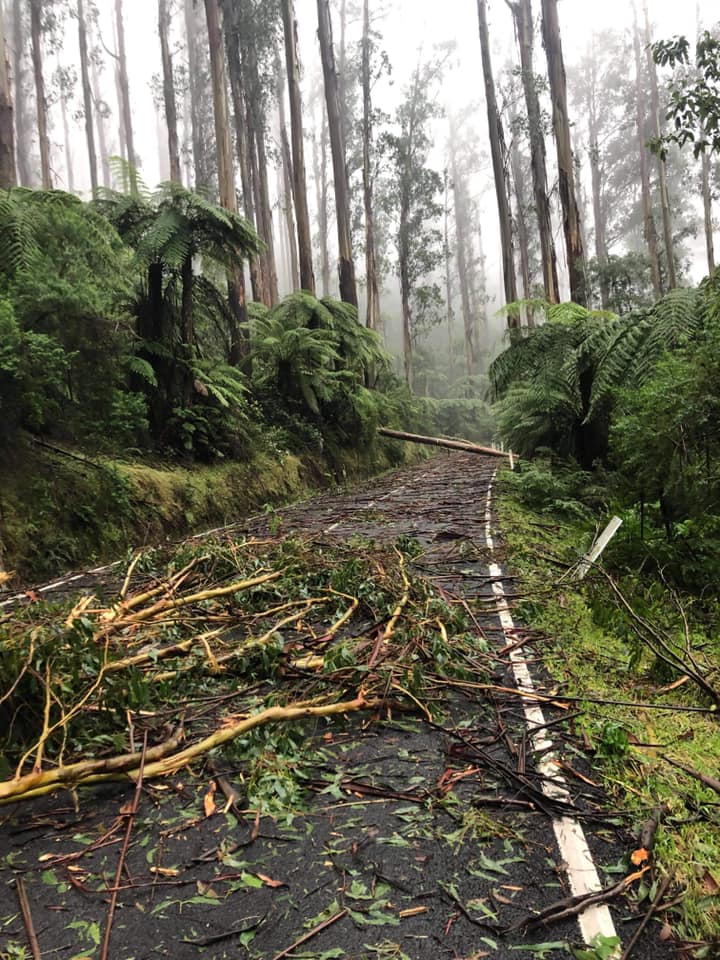 All of this suggested the ride should be cancelled but a moment of protean insight suggested we go West of Melbourne rather than East, where most of the devastation was inflicted.

The epiphany resulted in a hastily obtained route, some of which I had ridden on an Instagram perfect day several weeks before, a route which trails up through the Brisbane Ranges and then through the Lerderderg State Forest. By Wednesday we were given the all-clear to get out of Metro Melbourne, and by now several of the frustrated outbackers had decided to join the ride.

The list was now 18 gasoline-alley cretins long, but we were hoping that, as with usual ride planning, a lot fall out in the last 24 hours. This was not to be. 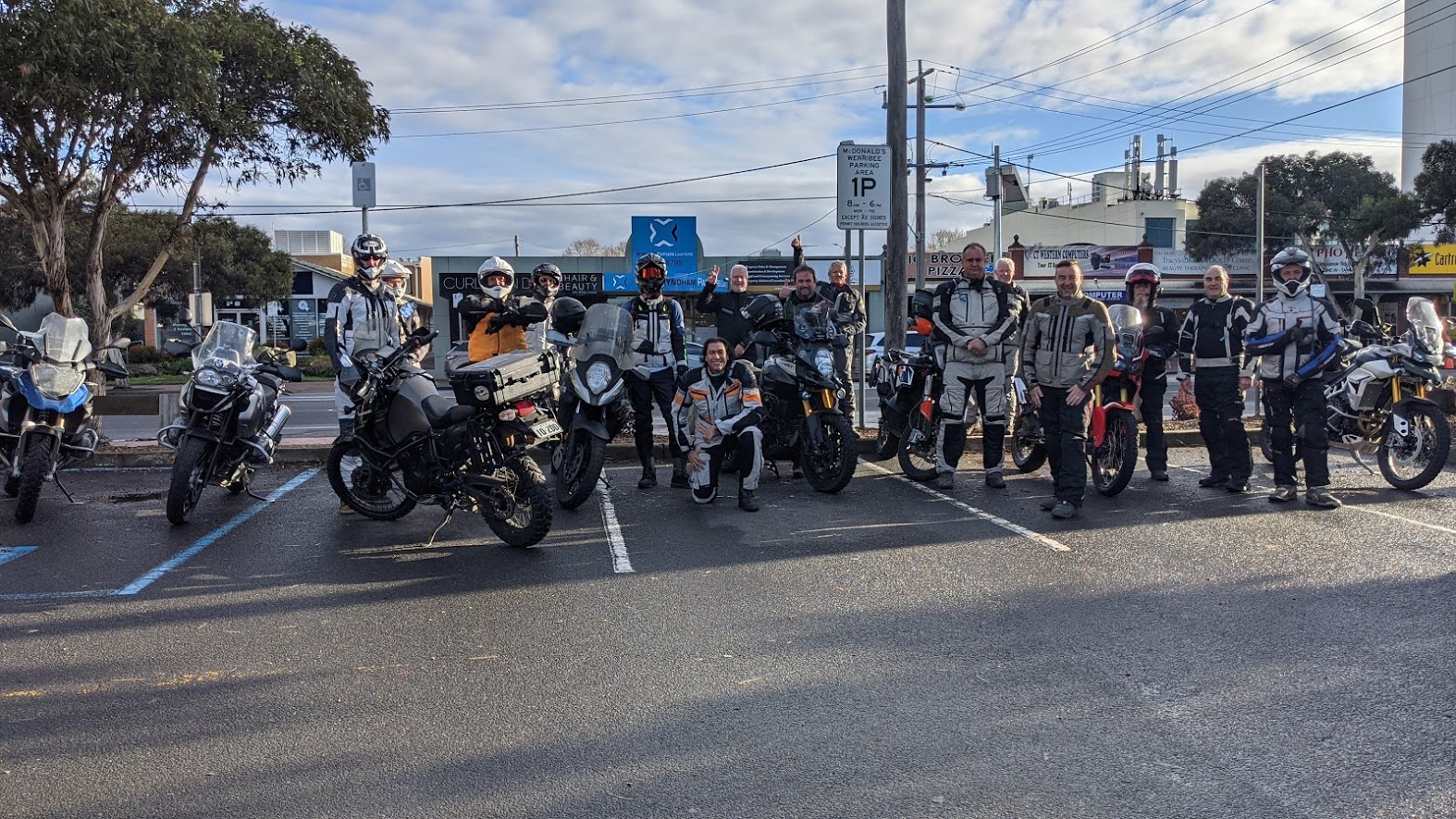 Fifteen desperates turned up, with Christian and Matus in spanking new riding suits and looking like they stepped out of a centrefold of a Rod and Gunn catalogue. Colin, in contrast, looked like he had hit every branch as he fell out of the tree. One would have thought, having been given the responsibility of leading his first ride, that he may have laundered his suit, but alas no. Reminds me of a report in the Canberra Times many years ago when a dishevelled Kim Beasley, who was the Minister for the Army at that time, attended the Graduation Ceremony at the Royal Military College, Duntroon. The reporter said that’s Mr Beasley stood to attention to receive the salute… unfortunately, his suit did not! Colin to a T.

Two groups of about 8 each, set off from Macca’s at Werribee on a brisk (10 deg C) ride to the southern end of the Brisbane Ranges where we hit our first dirt. The ride North had a series of eight switchbacks on a good holding surface, with a few friendly ascents and descents thrown in amongst them. No sign of washouts or fallen trees. So far so good. Across the highway at Bacchus Marsh and into the forest, once again on predominantly straightforward surfaces with no obstructions. Confidence grew as the day wore on, but our intended route to the Blackwood Pub for lunch was stalled by a closed road and fallen tree. 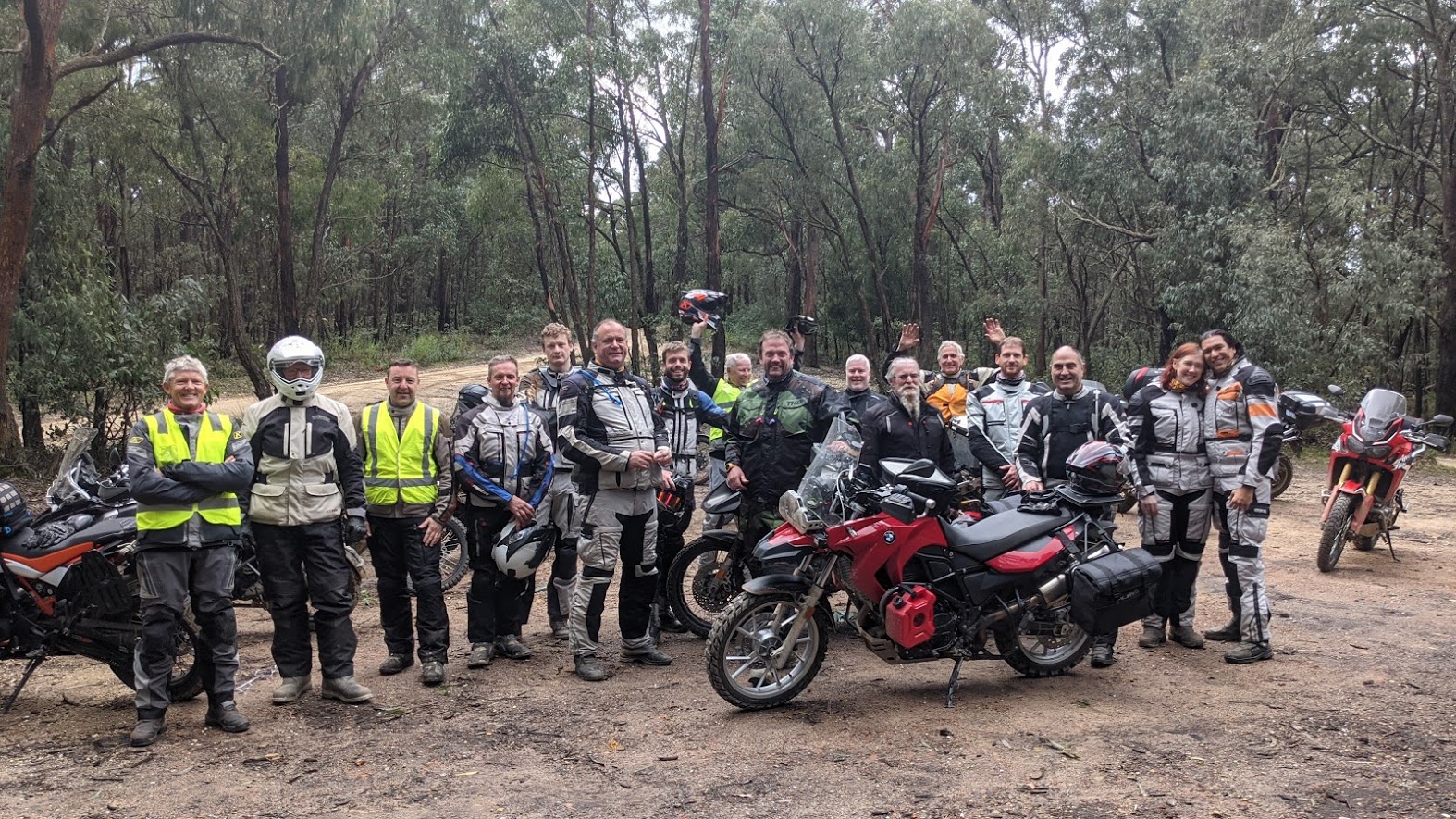 Quick recalculation and to Gisborne for lunch where the obligatory parma and a pot were appreciated. 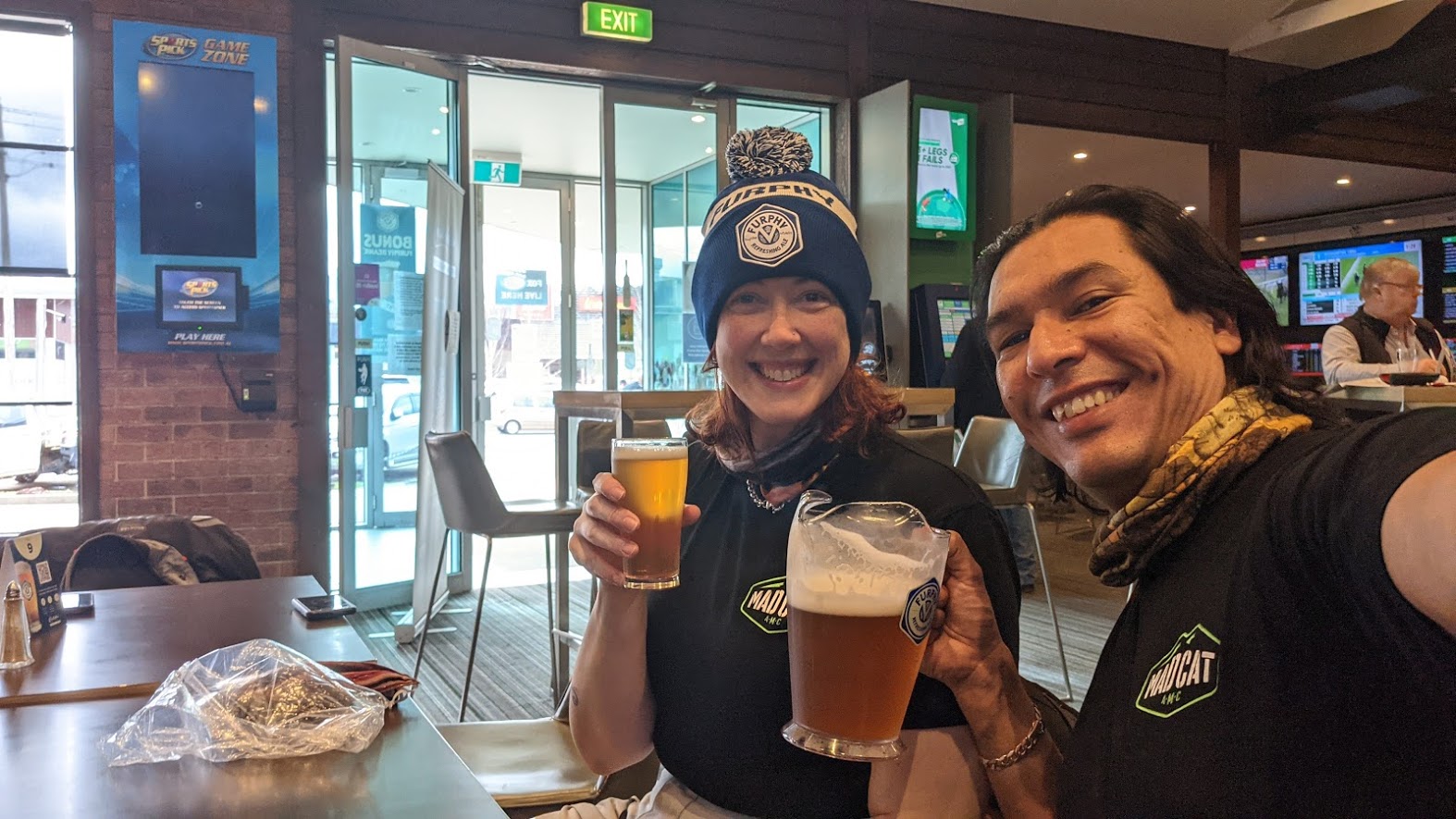 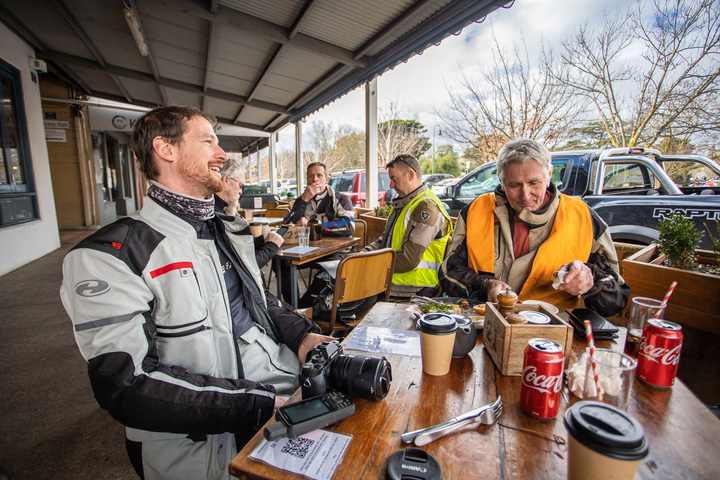 Reluctant to ride home on the Calder, everyone elected to retrace our skid marks through the Lerderderg Forest back to Bacchus Marsh, and from there, we rode home with the first sunshine in two weeks blazing in our mirrors. 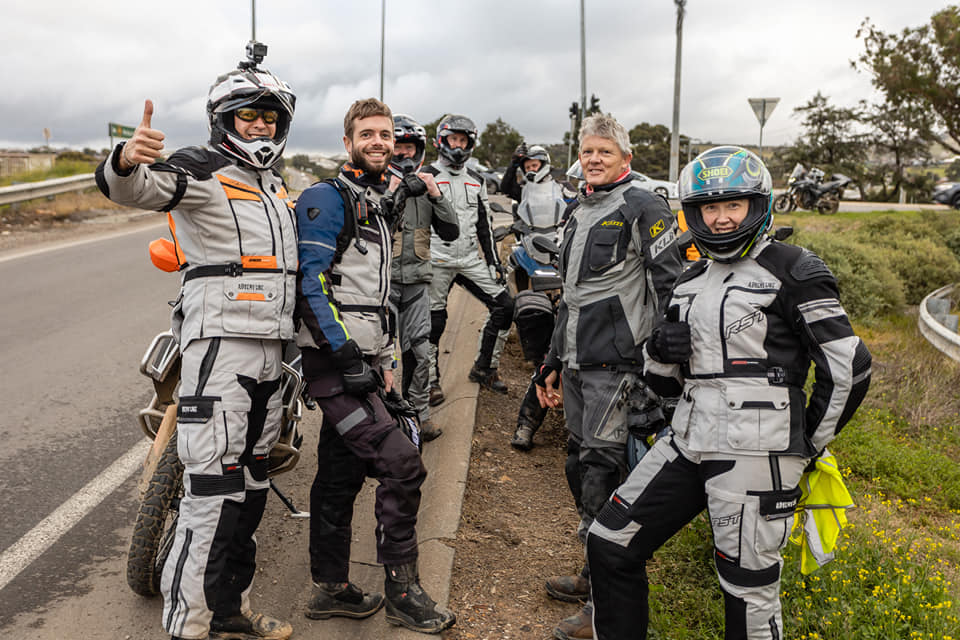 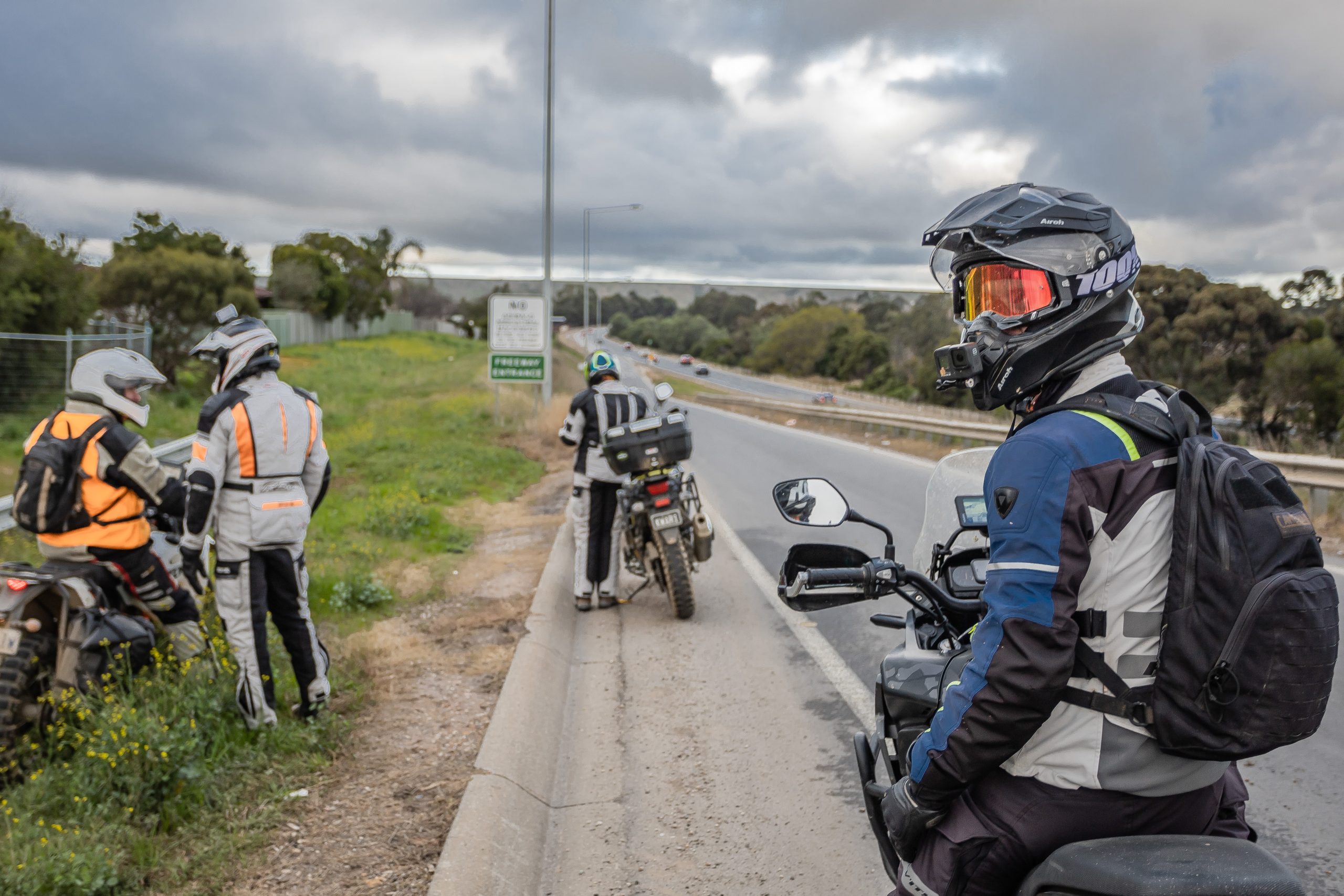 Raspberry of the day goes to “The New Colin”, Stephen Coop, who was seen pushing his bike through the Domain tunnel at 8.15am, on his way to the rendezvous at Werribee… he’d run out of fuel… despite the main tank on the GS850, and 5L and 3L auxiliary tanks. 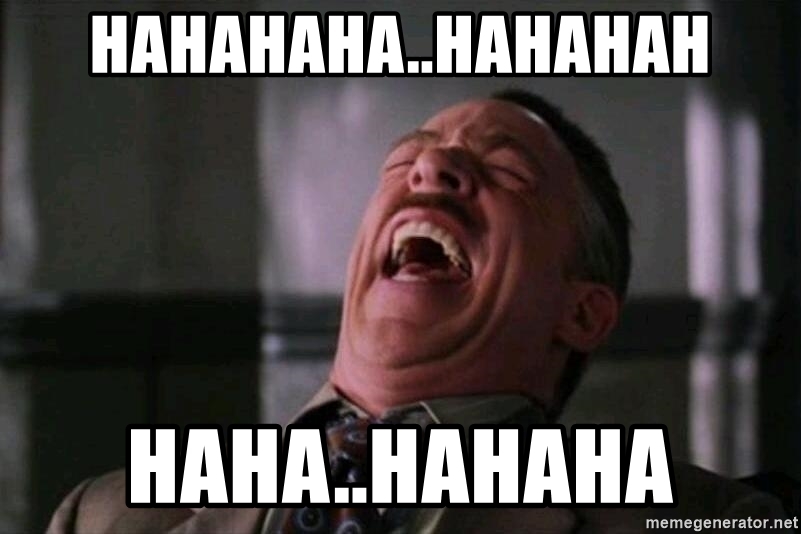 If the citylink incident response team, who arrived within 2 minutes, did not look disgruntled… they were at the very least, gruntled. One of them had a look on his face that said “There’s no point in arguing with stupid people… they bring you down to their level and then beat you with experience. Touché Stephen!

Honourable mention goes to Matus who besmirched his new suit via a close encounter of the unpleasant kind when he translated the term “off road” a bit too literally.