This was a big one, with a big story which I will try and recount the best that I can.

This trip was well planned, a pre-ride was completed in a day by MADCAT President Ian and Vice President Wayne without incident, so running this ride as an overnight club event was going to be easy right?… right? 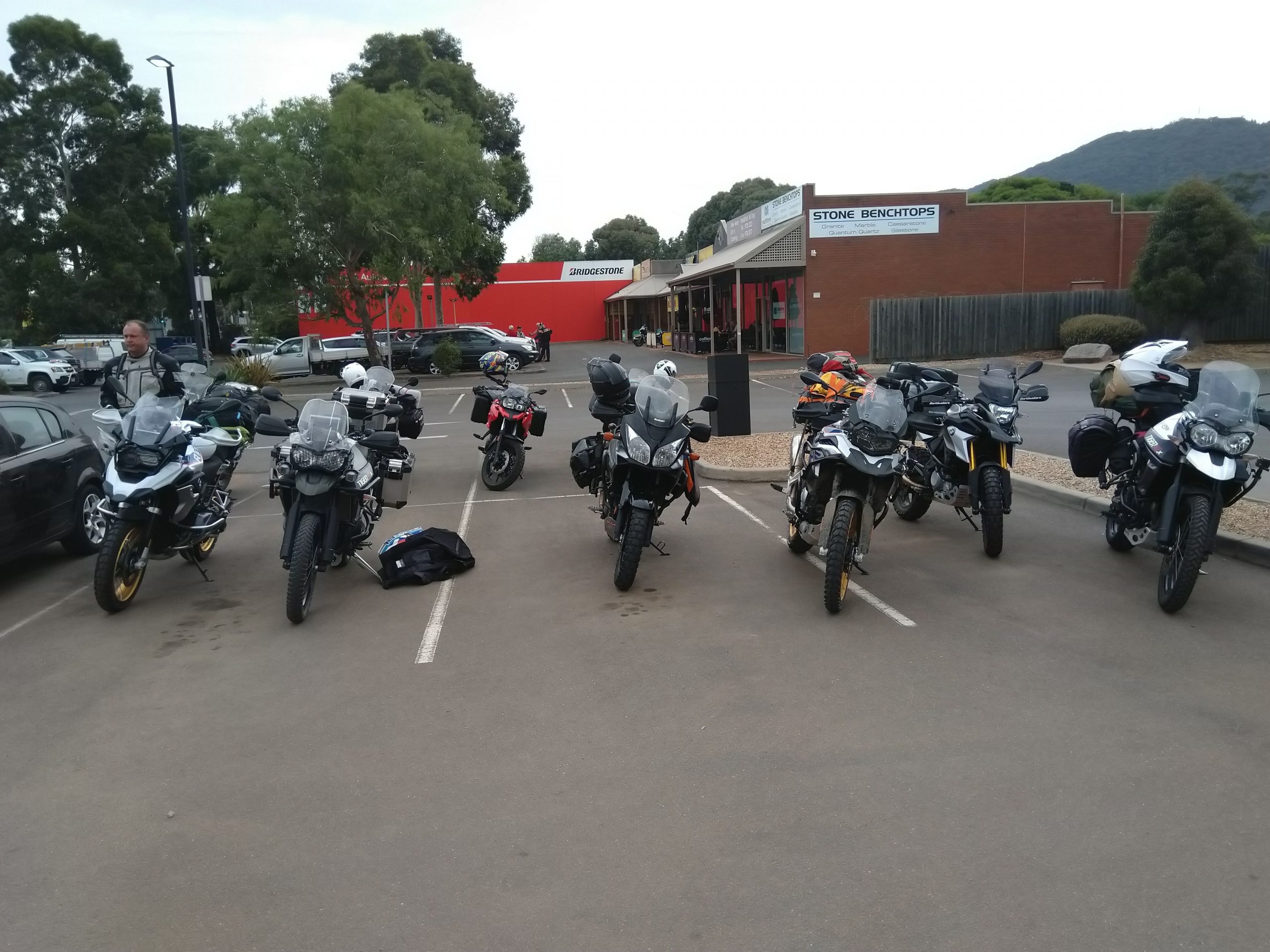 Around 10 of us left Kilsyth heading towards the hills beyond Warburton. Fairly early in the day we turned off the main road and on to our first hill climb. Some of us made it up first go, others needed to have a second crack, but for Wayne W, The clutch in his Vstrom decided it did not want to participate at all. After a bit of trail-side fiddling, it was clear that this was not something that was going to be repaired without parts and a workshop, so “el-presidentè”  Ian, VP Wayne, Wayne W and returned to back down the hill in an attempt to make their way to Kevington on the low road. We wished them well and they were on their way — We’ll catch up for them for a beer later. 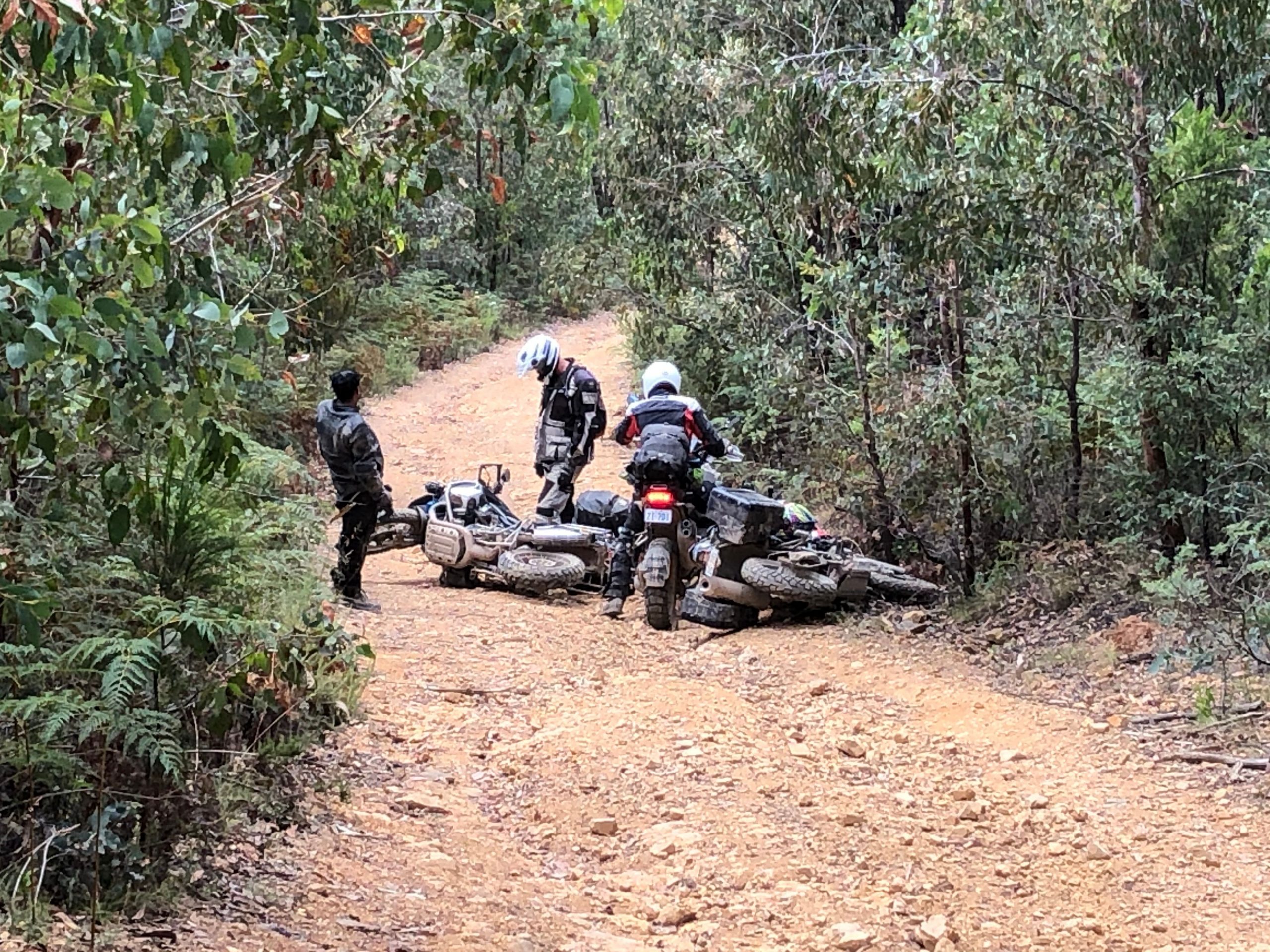 I continued to lead the main group. Unlike Wayne and Ian, I did not do the pre-ride, so I was not too familiar with what lied ahead. It was hot, bloody hot. 30+ easily. We were running out of drinking water, and the terrain was proving challenging with bikes being laid over left-right and centre. At one point I reached a fork in the road. Those familiar with the area would know that you often have spots where there is a choice between a more challenging route, and an easier route for a couple of hundred meters. At this point, with everyone exhausted, somehow I led the group down the most challenging hill decent I have ridden on an adventure bike to date. Right at the fork was not the right decision.

I started down the hill under braking, I was trying to make life easy, I was hot and tiered. I then realised that brakes alone were not going to do the job.
Into first gear I was now trying to use some engine braking to control my decent. This was working OK, until I started having issues with compression lockups.
On the throttle I was now, hurtling down this decent at an uncomfortable speed, starting to think about the ways I could lay, what was at this time a very new and clean triumph tiger, on its side to stop me from slamming into a tree at the bottom. Miraculously, I was able to find enough braking power at the bottom to stop. Damien T was following behind me; I think he and I were the only ones who managed to make our way down this one, shaken, but in once piece. Unfortunately Pradhumna, was not as lucky. Prad was half way down the hill when I turned around to warn others NOT to continue going right at the fork. Too late. He was in the process of dismounting his GS, and throwing his panniers all over the place. I think I saw him roll on his side 4 or 5 times before he came to a stop. It was both worrying and spectacular to see.

By this time the rest of the group had discovered that we should have taken the left option at the fork instead of the right, which provided a much more gradual and manageable decent.

Prad came off a lot better than his bike, which was very bent at the front end and un-rideable as a result. It was decided that Prad would stay with his bike atop the hill with Damien T for company, with the rest of us continuing by the most direct method to Jamieson to get assistance.

And the weather joins the game 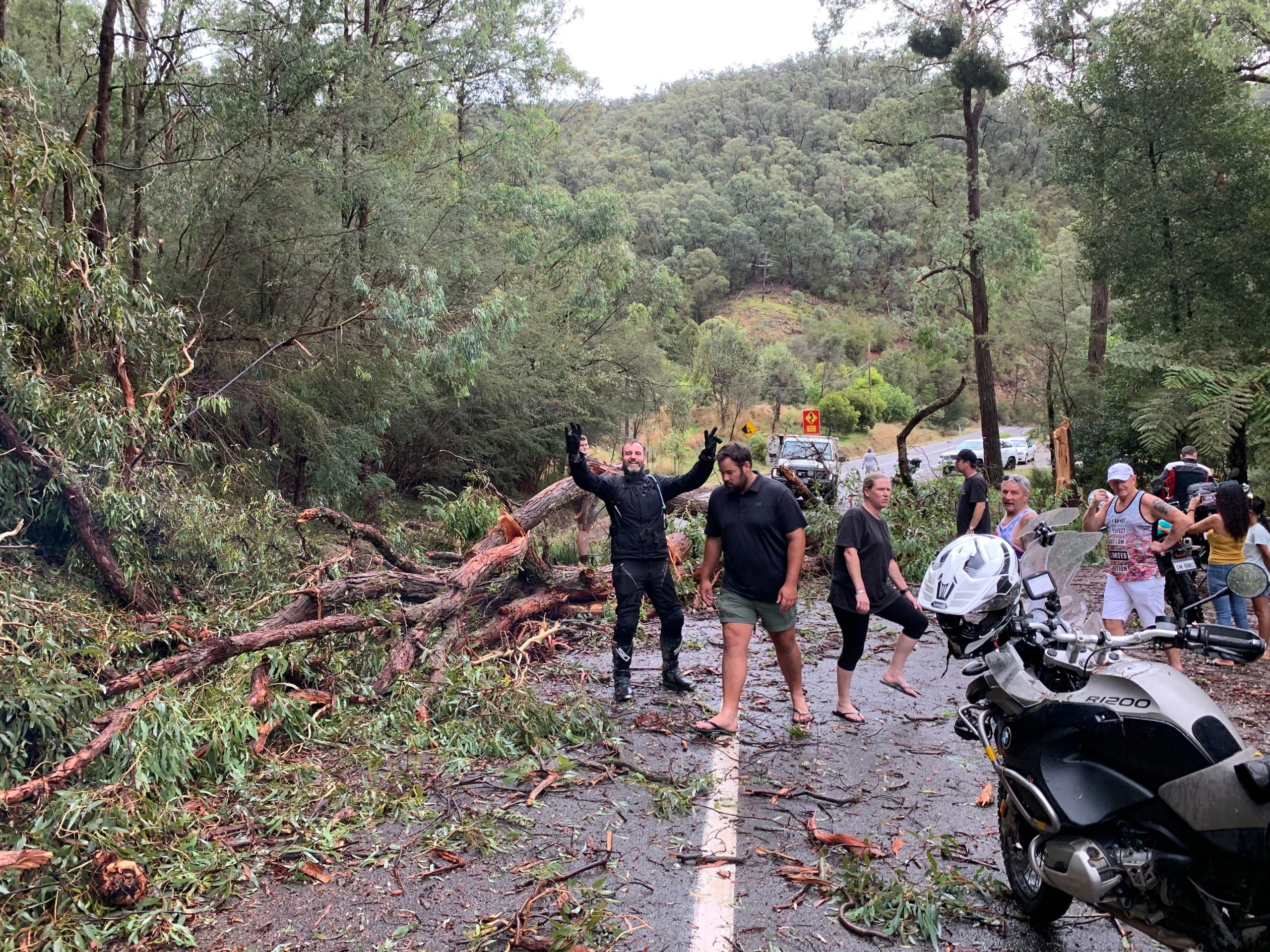 The weather was looking a little sketchy in the distance at this time, and the wind was picking up. When we got to Jamieson, I remained at the Jamieson service station to organise Prad’s recovery, whilst the rest of the group continued on to the Kevington pub.

Whilst in the service station it was decided that the local police officer “George” was the best one to help collect Prad now, and his motorcycle would need to be recovered by the service station owner tomorrow. Moments after George arrived to pick me up, the weather INSTANTLY went insane. Sideways rain, hurricane force wind, absolutely incredible, branches blowing down the main street of Jamieson.
The power went out, and then everything was quiet again.

At this point, we had people everywhere:
– Both Waynes and Ian making their way to Kevington on the Mansfield-Woods Point road.
– Prad and Damien waiting on top of a hill.
– And the balance of the group heading to Kevington from Jamieson.

So, I jumped in the Police branded GU patrol, and I proceeded with George (An absolutely awesome bloke) back up to the track where we left Prad and Damien. 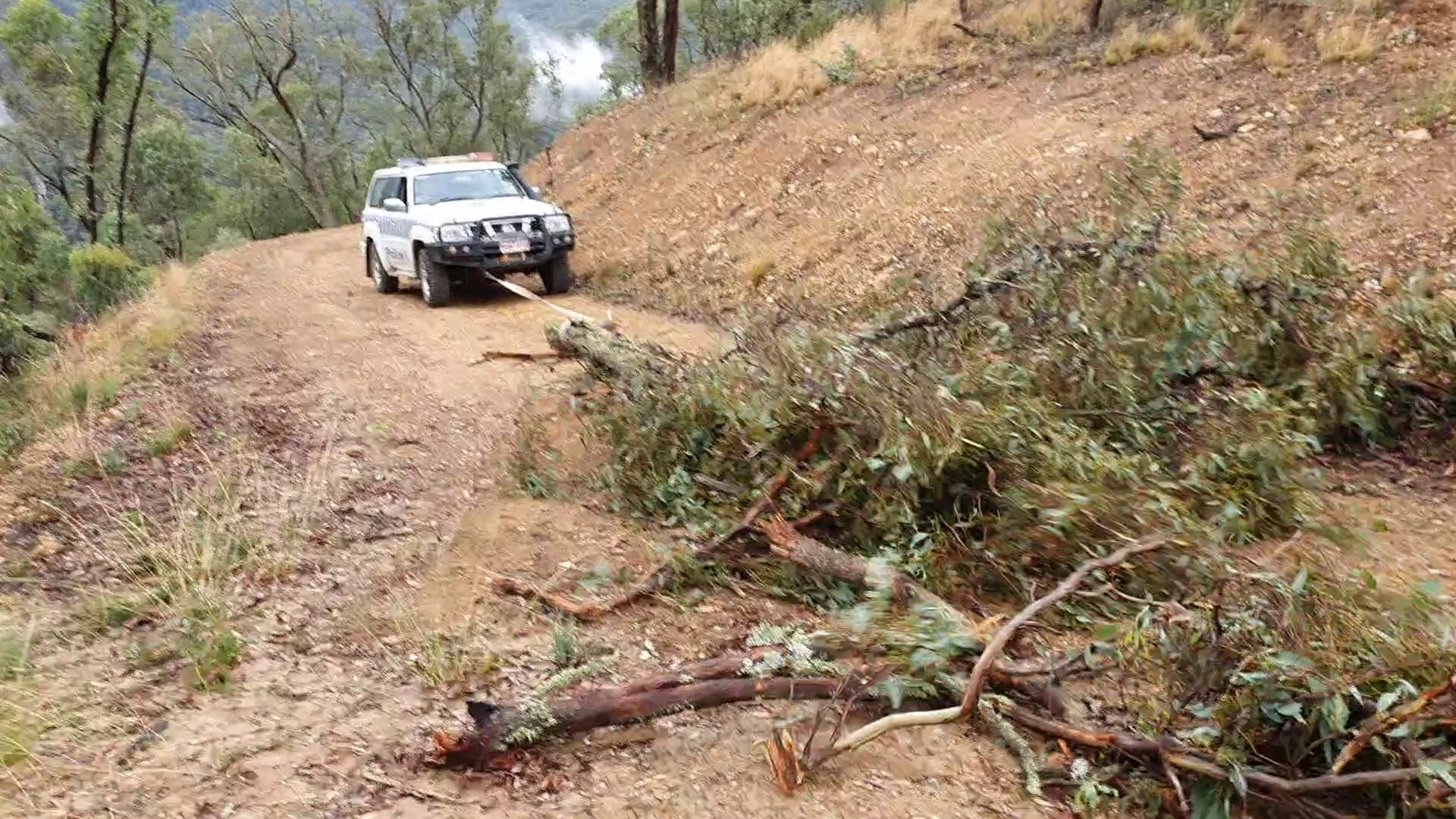 The destruction was incredible, trees everywhere. Several times I was jumping out of the patrol to hook logs up with a strap so that we could clear a path forward, all the while listening in on the police radio about the destruction everywhere, no power this side of Euroa I think.

Both George the police officer and I were actually having a bit of fun on our little recovery mission, clearing logs off the road finding stranded motorists along the way. Eventually we made our way to Prad and Damien, who from what I understand, only had a slight shower, not quite the deluge and destruction we had down the hill. Just as well, we left them without shelter (Although I believe they found a high-country hut somewhere nearby).

Damien T jumped back on his bike, and we chased him in the police 4WD back to Jamieson. We were using the police radar to track Damien speed, to make sure he wasn’t going too fast (he wasn’t). George tried to use the siren to pull Damien over anyway, but we discovered later that the siren wasn’t working due to being bounced around too much.

The pub with no b … power

When we got down to the bottom of the hill and back into Jamieson, the power was still out. The pub was closed.
We found out that those who managed to get to the Kevington pub narrowly avoided having their bikes crushed by falling trees, and needed to go back to Mansfield as the Kevington could no longer accommodate us. 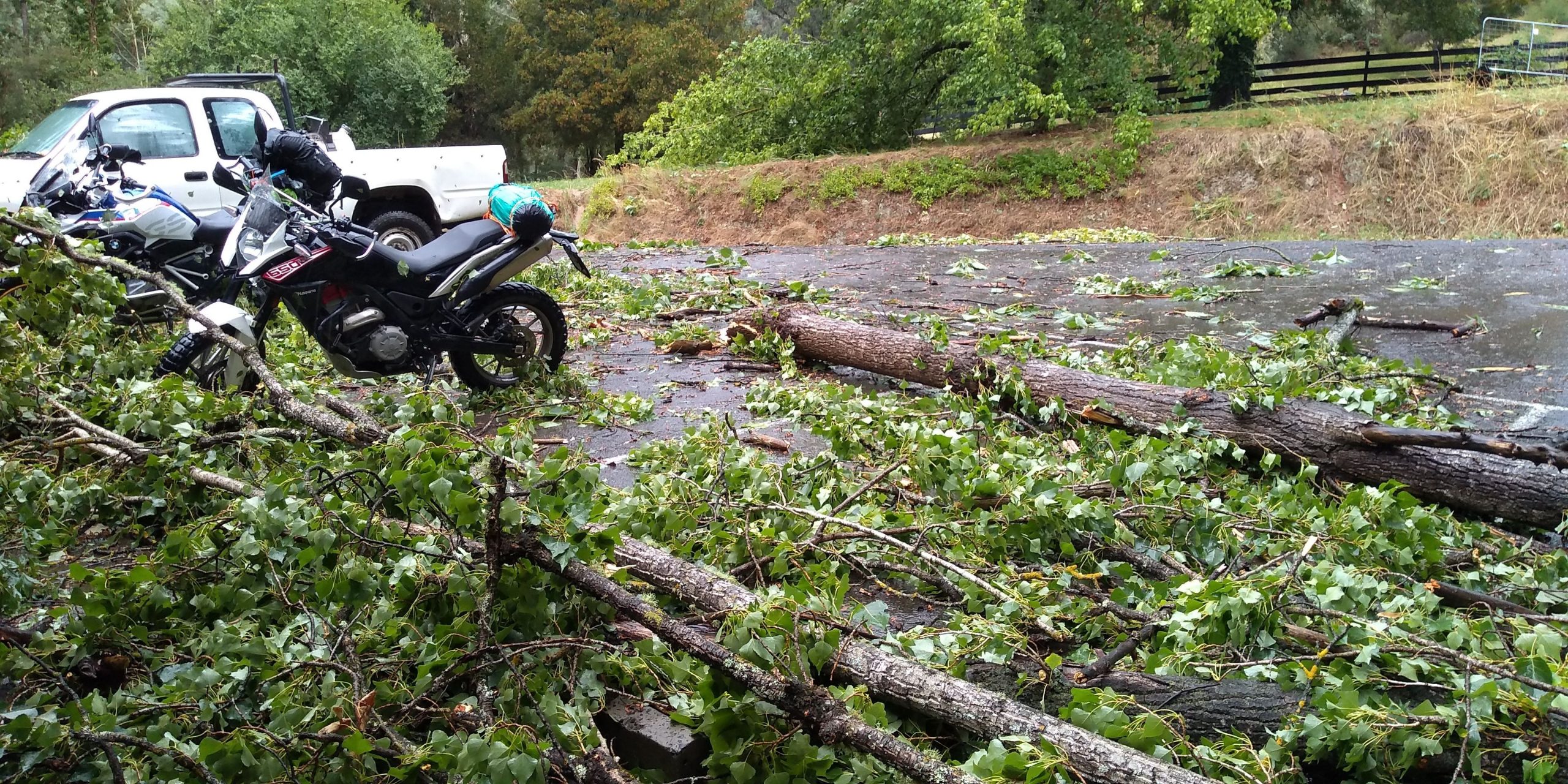 Prad and I remained at Jamieson, Both Waynes and Ian were still missing, everyone else headed back to Mansfield (I think?) so they could get a feed and a bed. By this time the power had been out long enough for the batteries in the local mobile phone tower to be completely flat. It was dark, we were hungry, and we had no way to communicate with the outside world. It felt apocalyptic.

We managed to purchase (with cash) some bags of chips from the darkened courthouse hotel —- better than nothing.

Prad and I set up camp at the Jamieson caravan park, sat in our camp chairs and ate chips in the dark. 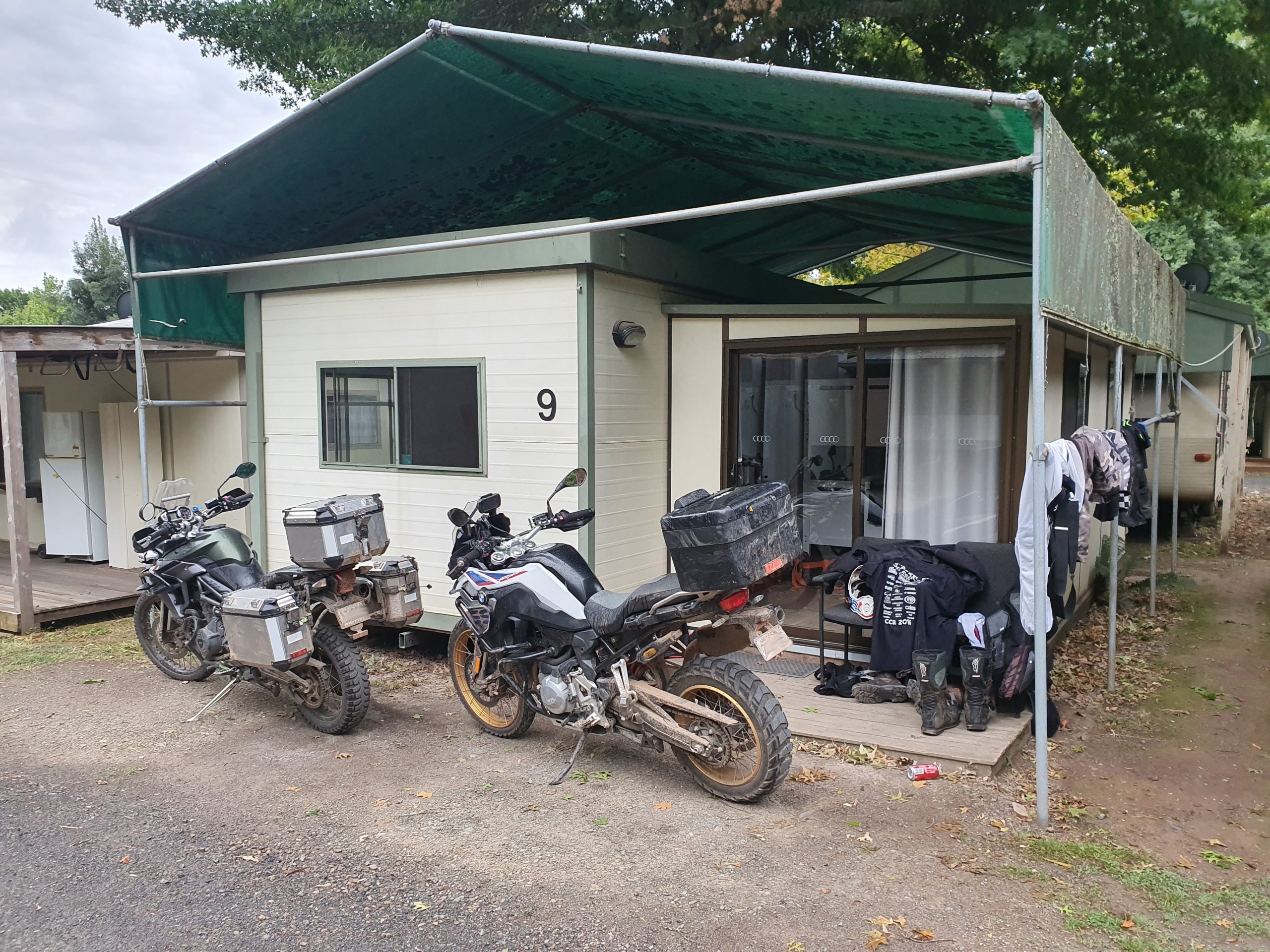 We were about to call it a night when, what’s that?… we heard motorbikes!! Amazingly, Both Waynes and a single Ian arrived into the Jamieson caravan park well after dark. They had no idea that Prad and I made it here, an unexpected reunion of sorts. Their bikes looked like they had been to hell and back, and the Vstrom was missing. Wayne W was 2-up on VP Wayne’s triumph tiger.

The Vstrom clutch was unable to propel the bike even on level ground, so it was stashed in the bush for collection, a mission for another day.

Apparently during the height of the storm they were caught on the road with trees falling in front and behind them. They had to use branches between wheel spokes to carry the bikes over enormous gum trunks across the road.

It was necessary for them to leave the relative safety of the main dirt road to navigate around the fallen timber. The side tracks were wet and very slippery. Both bikes hit the deck on multiple occasions as I understand it, Ian’s brand new 850 GS sustaining significant damage along with its rider, who is still recovering from the resulting shoulder injury to this day.

Having arrived so late, they decided to scrap the idea of camping and instead opted for a cabin with a gas stove. Some pasta and pasta sauce from the caravan park owners was a better dinner than a bag of chips, I think we even managed to get some beer as well.

The following day, Prad arranged the collection of his motorbike with the local service station owner, the rest of us headed for home. There was still no power along much of the route, we almost ran out of fuel because we could not find any operating service stations.

What an adventure. This is what it is all about!

Text: Rob Haines
Photos provided by Robbo and from those who survived