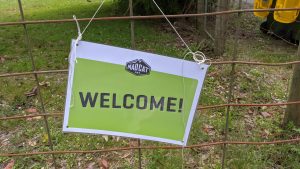 COVID restrictions and unstable Melbourne weather were a constant menace for the planning of the first ever MADCAT Annual General Meeting.

Many plans were made, locations changed and dates moved.  Nevertheless the team never stopped pushing to meet the goal.

1 week to go and the BOM forecast looked like a nice day for the wetlands of Scotland, not good for our intrepid heroes trying to celebrate their recently returned freedoms.  Reverse Indian rain dances were performed by a native South American with an injured knee  to please the Gods of Rain and eventually, with 1 day to go, the sky turned clear, with some clouds, but no rain. 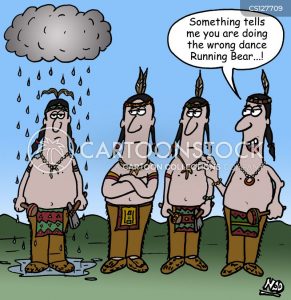 The attendance at the event was less than we catered for and although we only had around 25% of membership on site, a great time was had by all at the Wesburn Camp Base.

Robbo, the Madcat Secretary, arrived early at the Wesburn Camp Base on Friday morning and started to organise everything, setting up all the audio equipment for the band, video display, and organising the chairs and tables etc, well done Robbo. 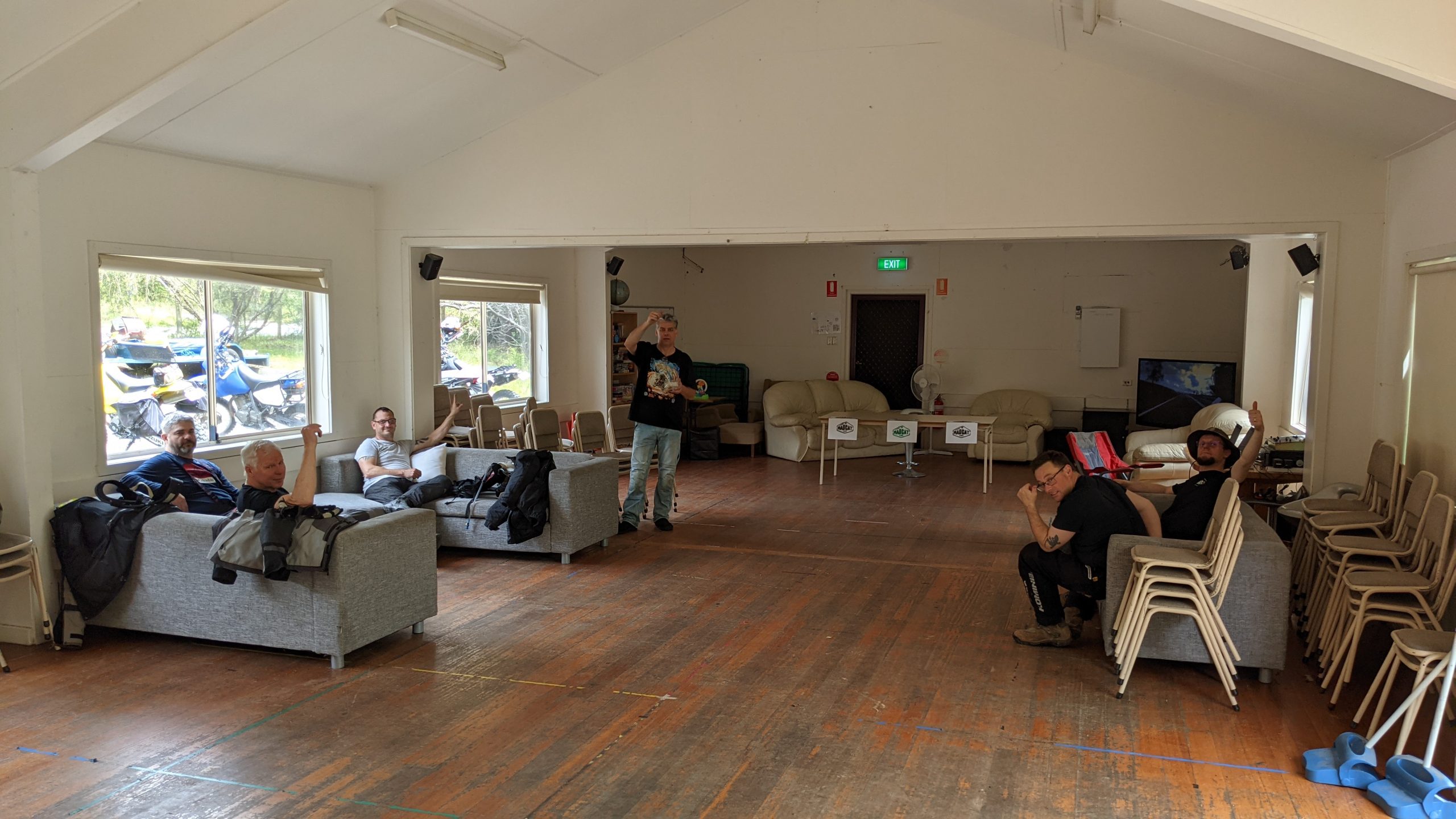 As members trickled in throughout the rest of the morning, the party started to take shape. The weather seemed to be holding off for everyone to have a nice ride and there was lots of excitement starting to build.

After having lunch, a group went out for that ride; they found a decent amount of mud, judging by the colour of their boots and bikes when they returned that afternoon.  They were so covered, that they decided to hose down their bikes before embarking on a second ride later that afternoon.  However, this ride had so much dust that when they returned for dinner later that evening, they decided to clean their bikes a second time. 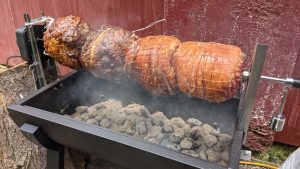 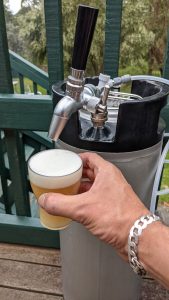 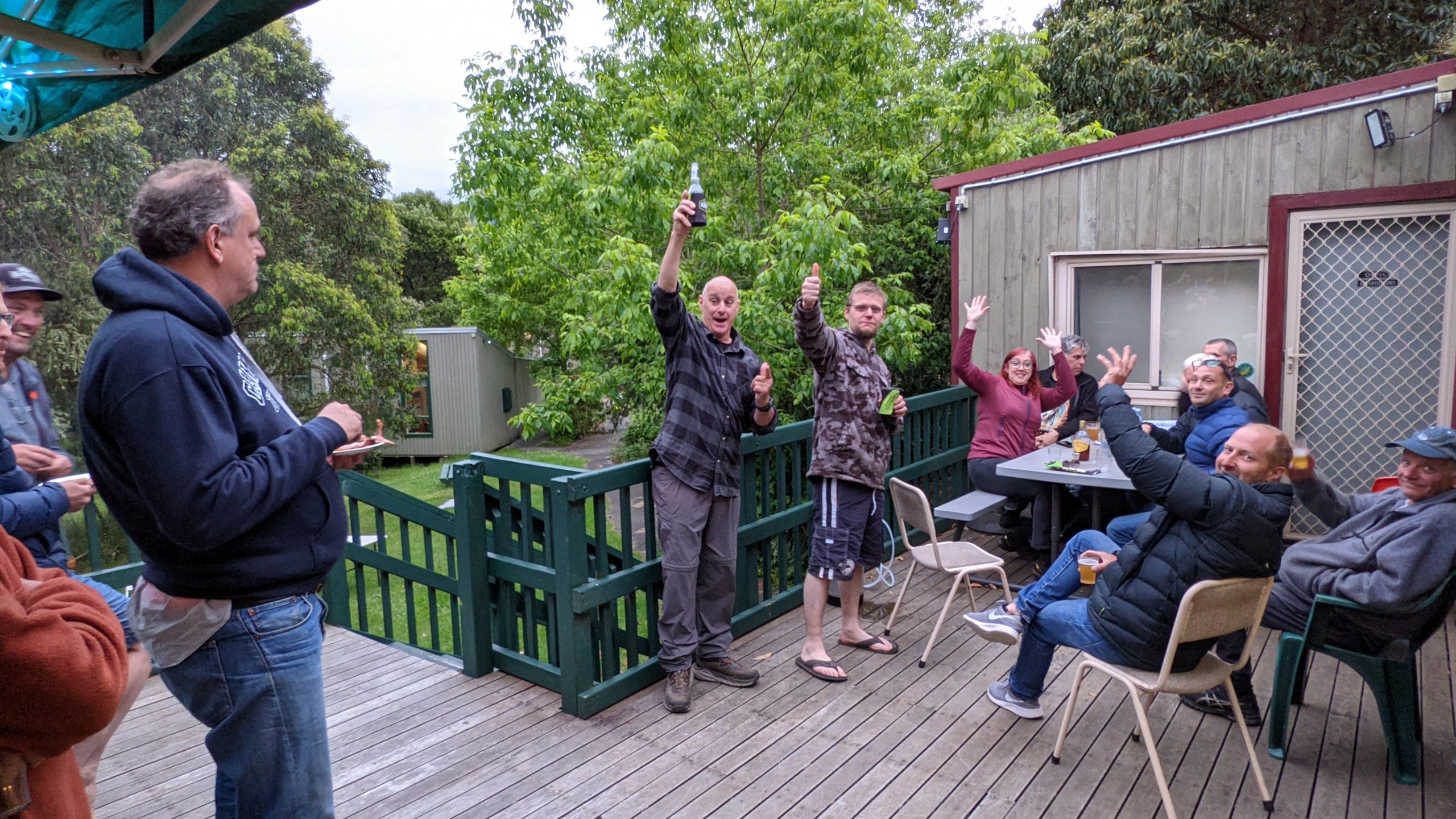 Friday night saw a mini spit pork roast that threw challenge after challenge for all the fledgling spit roasters. This in conjunction with an unexpected keg of homemade beer brought by Dean and a well stoked fire, fuelled conversations that lasted well into the night.

A rather rich in proteins, breakfast of champions (AKA egg and bacon rolls) greeted the day, giving everyone much needed energy for the planned rides ahead. Ian showed us his cooking skills  that morning. 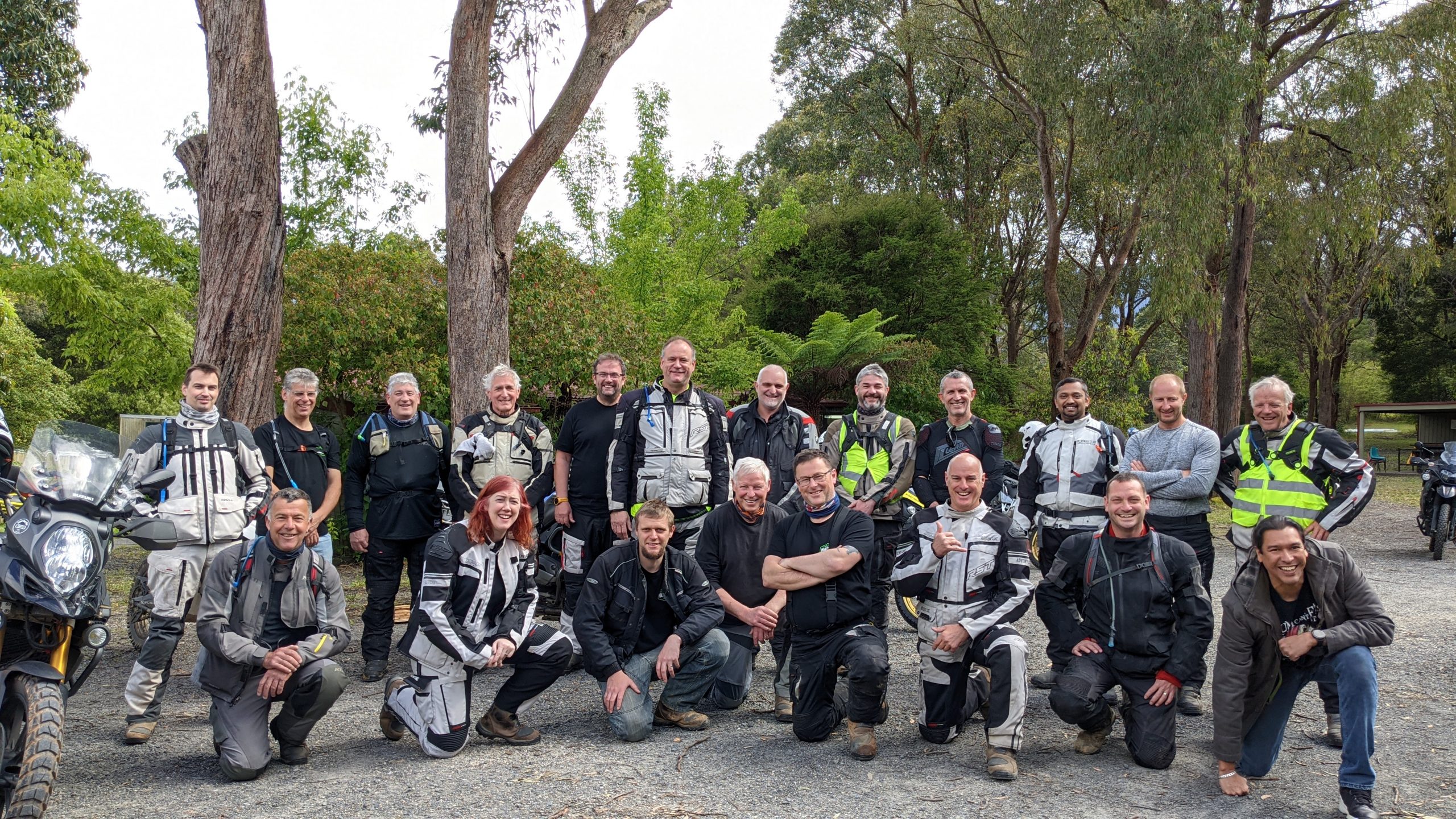 The first ride was to start at 10:00am and for Robbo’s pleasure, there was a new Heimdall the Gatekeeper, Jonathan, as his knee injury prevented him from riding the whole weekend. This, unexpectedly to Robbo, meant he could go to every single ride. 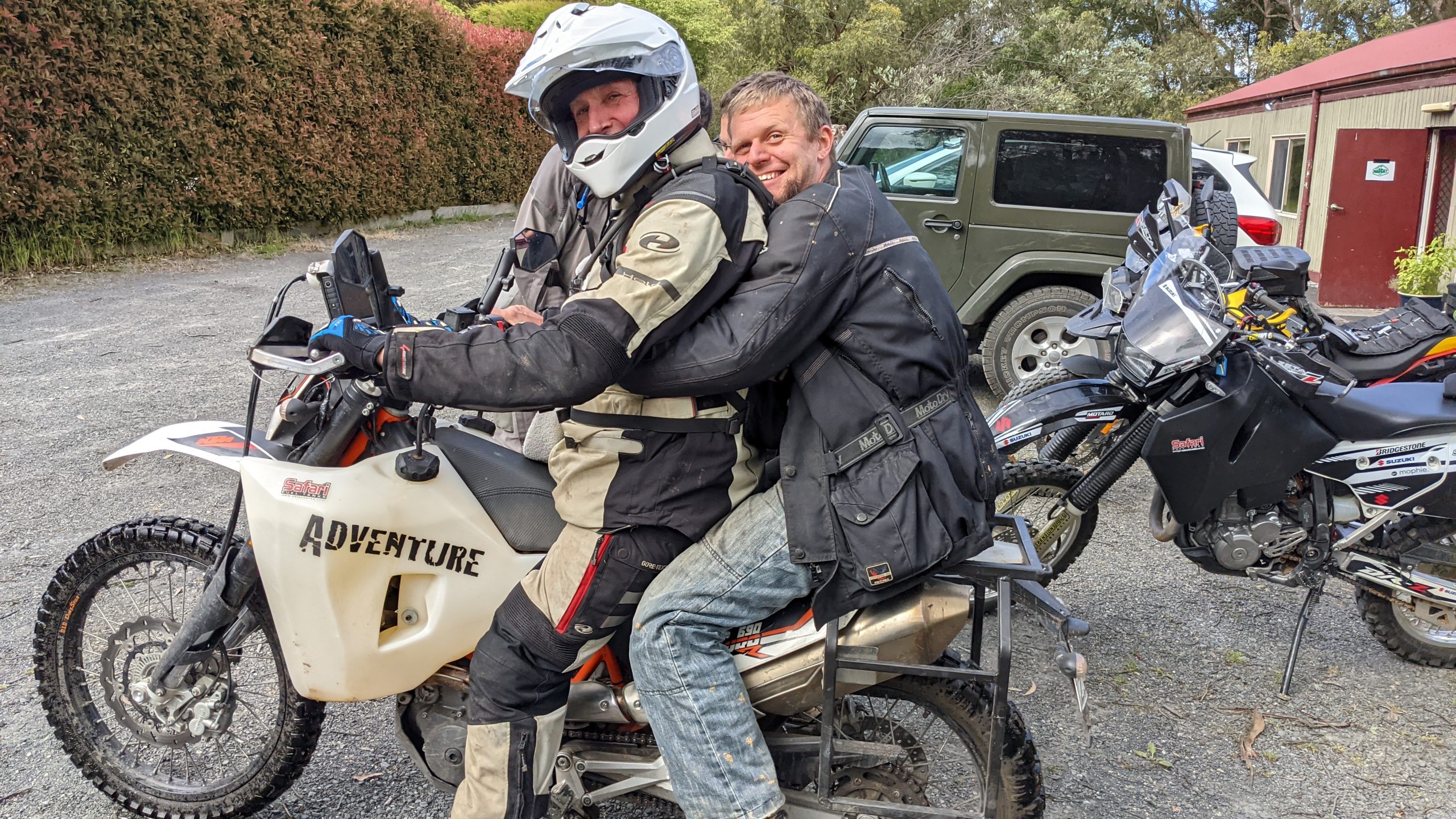 Unfortunately, Ben arrived 10 min late and he became Heimdall’s companion for the day, he also had to cope with the boring sound check Heimadall the Gatekeeper, was doing all afternoon. 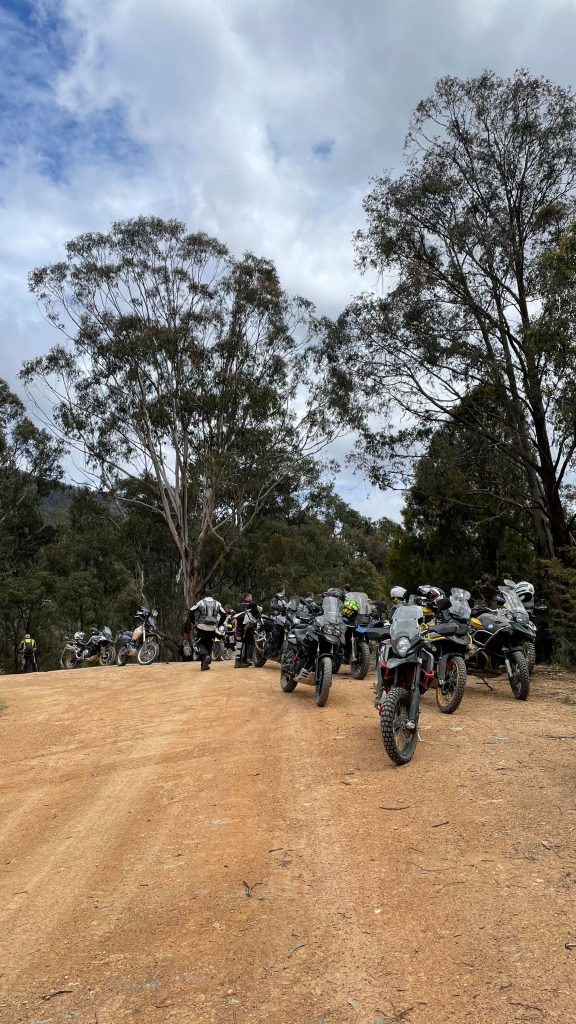 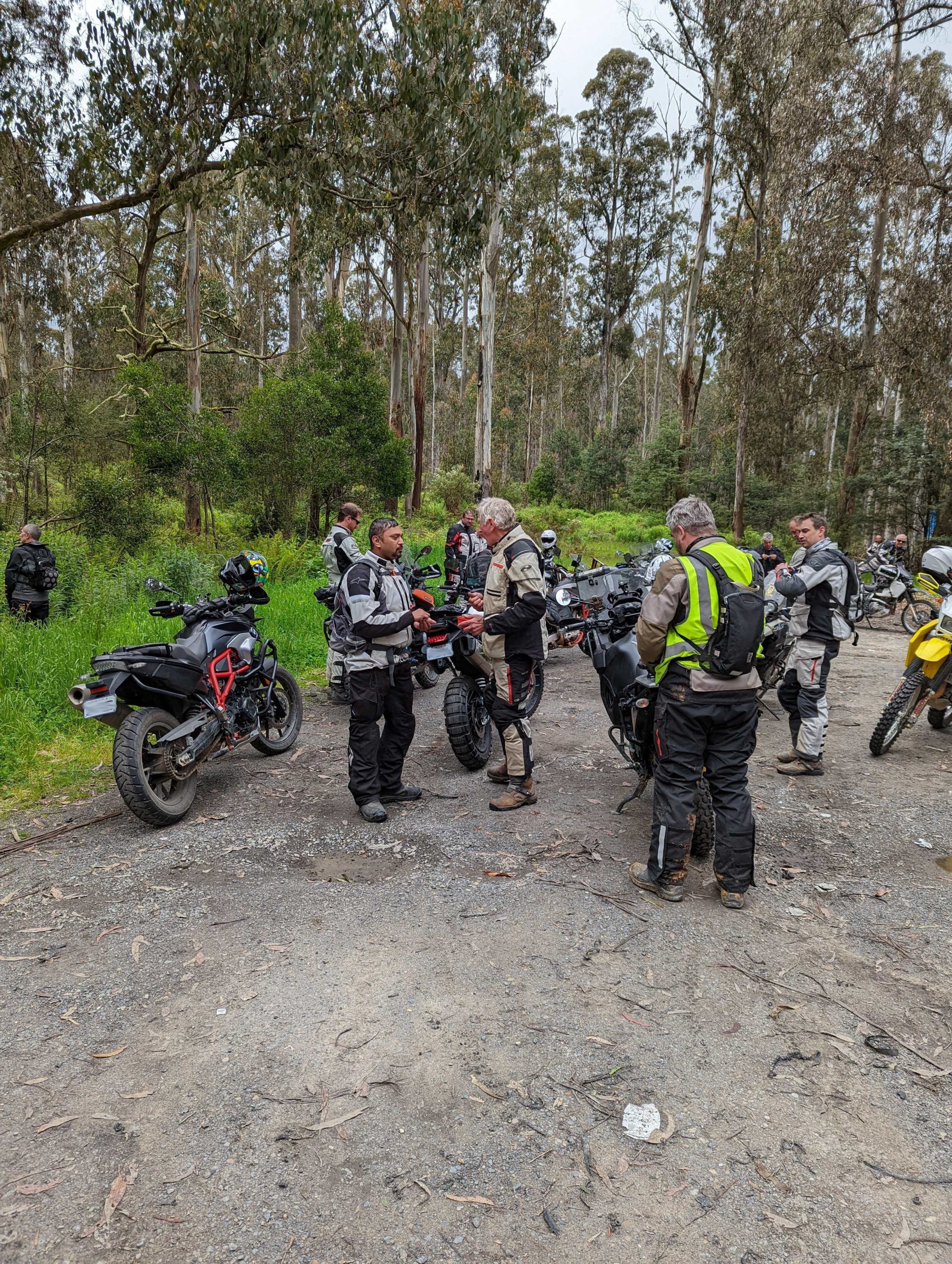 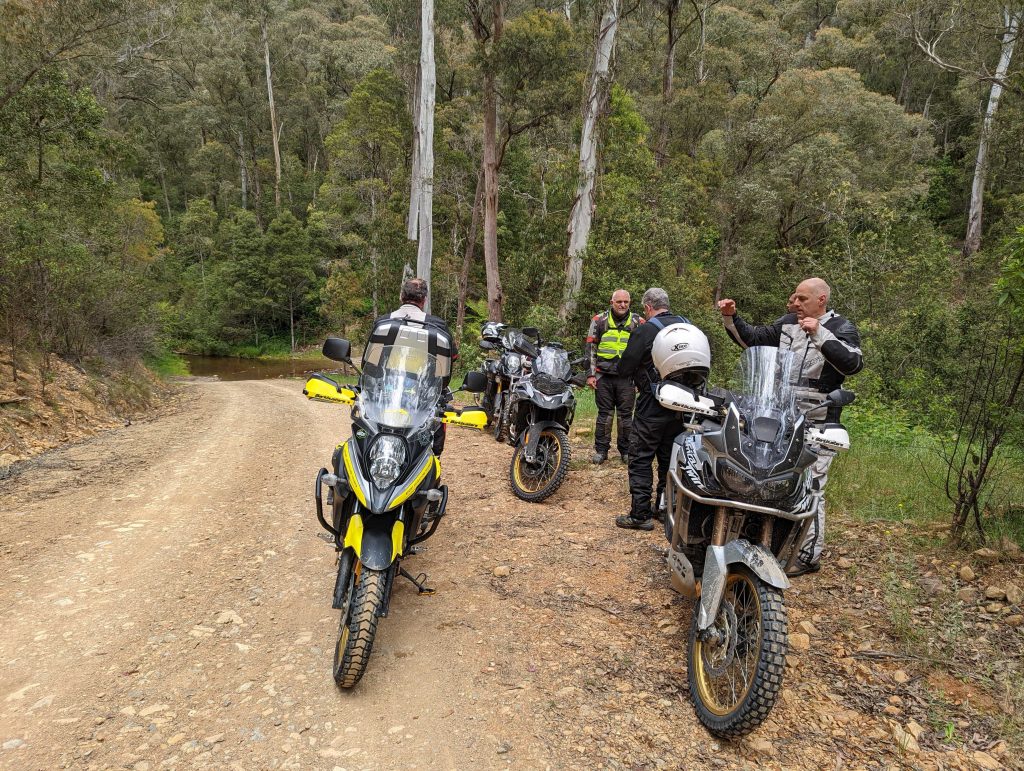 The forecast of rainy weather for the weekend didn’t eventuate and the whole group headed off to Big River for a ride day. The group split in two with an easy path and a challenging ride that took Hope Track with Mt Terrible the target. Twelve or 13 riders took the challenging ride which saw them heading up the steep hill climbs of Hope track. One of the harder sections claimed 3 riders with bikes dropped at 3 different parts of the hill. All were soon on their way up again after some awkward remounts while the bikes were held in an upright position by Robbo et al. With the advantage of seeing what lines hadn’t worked the remaining riders made quick work of getting up the rocky cambered hill by staying to the right hand side.

Everything looked to be going well to get to the top of Mt Terrible until Andy decided to snap his chain after landing on the back side of a whoop. For a few minutes it looked pretty ugly with the prospect of descending the same difficult section without the aid of engine braking and even then needing to get a ute or trailer up to recover the bike. Fortunately, once Robbo circled back it turned out that he had some 520 links, chain breaker and between him and Dean, enough tools to get the job done. To say it wasn’t the most elegant bit of bush mechanics ever attempted might be an understatement but eventually the chain was back on and the pit crew re-joined the rest of the group who had all had a very extended break at the junction of Hope and Mt Terrible tracks. Possibly excepting Colin who could be heard hooning around the surrounding tracks! Unfortunately, this extended delay meant that the group ran out of time to reach the summit and headed back down to meet the others. Unable to find group 2 they headed back to camp to get ready for the AGM.

The second group travelled the length of Big River road which had 2 small river crossings to add some excitement. At the end of the Big River Road, this group split again as there were some rather tired riders who needed an easier trip home.  This group of 3 came back via a logging route Julian knew about called Eildon-Warburton Road and randomly met up with the Mt Terrible group on the side of the Wangaratta Highway and all rode back into camp together.

There were a few miscommunications here and there between the groups and the trip was starting to run a touch overtime.

Eventually, everyone made it back to base just in time for the scheduled 5.30pm AGM. With just 1 accepted nomination for each of the 4 Committee positions, voting was not required and there was only one change to the committee for 2022. MADCAT welcomed Martin Vorster into the role of Vice President. Martin has been an ongoing contributor to the startup of this club and we all look forward to working with him. The MADCAT Committee would like to thank our former VP Wayne Rose for his efforts and contributions during his term. Thanks Wayno!

It ended up being a somewhat rushed meeting as we still had to prepare dinner, say bye to a few people who were headed home that night before dark and get the fires started for the night. Everyone was working together to make everything happen in time, even as other event may have gone happily unnoticed.
The braai for cooking the meat and resulting fire for the night was in the capable hands of our resident Braai-master, and newly minted vice-president, Marty.  In the end, bellies were full, tired hands were warmed by the glow of the fire and all members present were having a ball.

On Saturday night, we had the pleasure of seeing Random Haze perform two sets of great music starring “Gail & Jonathan” and the crowds were extremely pleased with the show.  Of course everyone was happy; they were the first MADCATters to ever play live in an AGM that had never happened before.  Robbo-this-is-not-my-first-rodeo’s DJ-ing talents and ability to know his audience kept the vibe going before and after the sets and well into the night.  In between, there were 3 magnificent videos played, one being a sum up of the year that was by Damo, who managed to pick a song from one of the Random Haze sets, and 2 by Robbo.  They were very well received by the audience with appreciative cheers and OOOHs and AAAAAHs.

Eventually, tired bodies weary with age, and not a little dust from the day, slowly made their way to bed with a handful of older misfits pushing on until the early hours.

Another AGM morning, another breakfast of champions made by our breakfast’s master Ian, with an espresso coffee machine which set the mood for the cleaning job ahead. Again, everyone helped to get the camp site clean and tidy.

It really was great to see everyone chipping in unbidden all weekend with a helping hand with cooking, cleaning and food preparation.  It made the weekend run smoothly, and took a lot of pressure off the committee who were genuinely concerned about making sure all the tasks were done completely and smoothly.  A really big THANK YOU goes out to all MADCATters who helped.  Many hands really do make light work.

An appreciative thank you also goes to Dean West who brought with him a keg of beer for the alcoholics and a coffee machine for the caffeine addicts which he kindly shared with all.   It’s like he knows us a little too well….

We also need to mention the great work made by Ian “El Presidente”, who was behind the scenes moving things around the kitchen, cleaning and keeping “Boris The Beast” busy. Also special thank yous go to Andy Macey, Tim Stolz, Andrew Robertson and Ben Hurcus for their help in the kitchen.

A great weekend was had by all at MADCATs inaugural AGM.  It ran smoothly, and everyone had a marvellous time.  So much so, that all who are now suffering from FOMO after reading this, will be pleased to know that MADCAT are already booking and planning for next year’s AGM!  So keep your weekends in November 2022 free!! 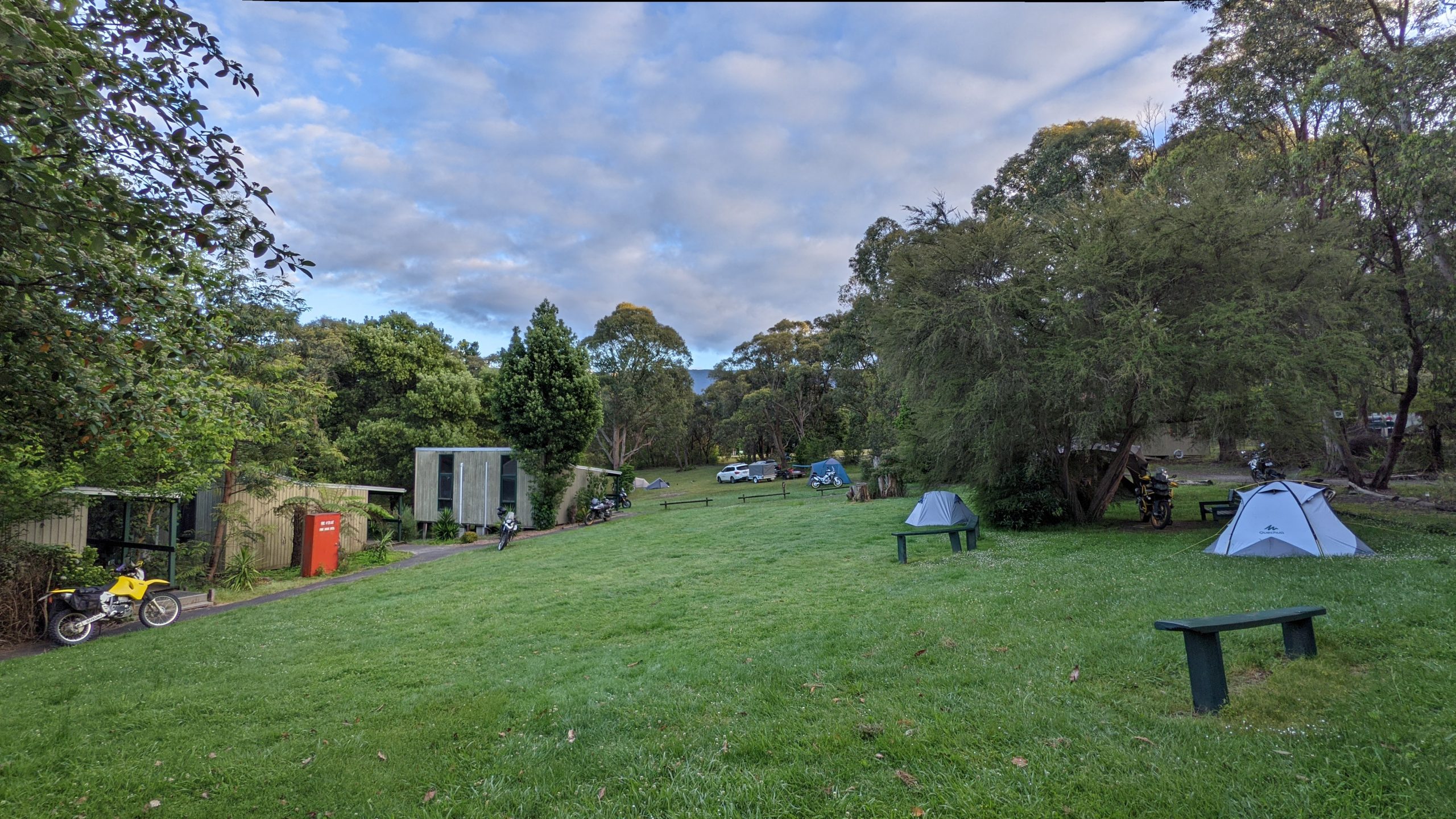