Mental As Anything Ride Report

While it was only a few days short of being a legitimate last-minute ride, this trip was inspired by a club member’s post of a local enduro rider smashing out the Tinger Spur Track. Damian posted the Youtube Clip on 20 December on Madcat Slack, and by Christmas Eve Tim had the bones of an overnighter mapped. The ride was quickly christened, and in the current nomenclature was blessed with “Mental As Anything”, name-dropping the track I’m on a Road to Nowhere. However a quick check of MAA’s discography fails to find a track so named…so either he was thinking of Talking Heads, who, to be fair, could be pretty ‘mental’… or maybe there were any number of Mental tracks he was channelling; Bucking Hard (2009), If you leave me can I Come Too? (1981), Let’s Go to Paradise (1987), Baby You’re Wild or In the Sunshine (1989) or Up & Down (from the 1998 album Garage).

Good start of the year

Robbo, Tim, Andrew, Wayne and Dean met at Yarra Junction on a warm Sunday morning, with at least a couple of us having already clocked well over 100km just to get to the meet point. If this early commencement of rides for the club is a harbinger of annual Madcat outings, then 2022 is going to be busy.

And then there were four

From Yarra Junction we headed through Warburton and quickly turned on to the Acheron Way. With new gravel on the surface, it was a fun start to the ride, and a great way to get the off-road feel back in place after the excesses of the festive season. The ride was to feature four significant ridge-line / spur tracks, offering a variety of stunning views, technical challenge, steep drop-offs and native bush settings. Before reaching any of these however, we lost our first rider, with Wayne – fair-fanging his new T700 along Big River Road – caught out on a corner deep in bull-dust. With the temperature rising and plenty of dust already coating the bikes, he decided he didn’t need any more down his pants and headed back home.

Which meant there were four riders left to face the first of the spur trails – Frenchmans Spur Track. While the least difficult of the tracks, Frenchmans was reasonably long, and allowed us to re-appear in Matlock, just short of our most challenging – and the original inspiration for the ride – Tinger Spur Track.

With a little help from my friends

The track was a blast of a ride, with most sections allowing good pace, plenty of whoops and flowing corners where we could focus on developing our technical prowess. That practice was to be tested two thirds of the way along with the first of a steep and rocky descent sending Tim into a conveniently placed crop of trees. 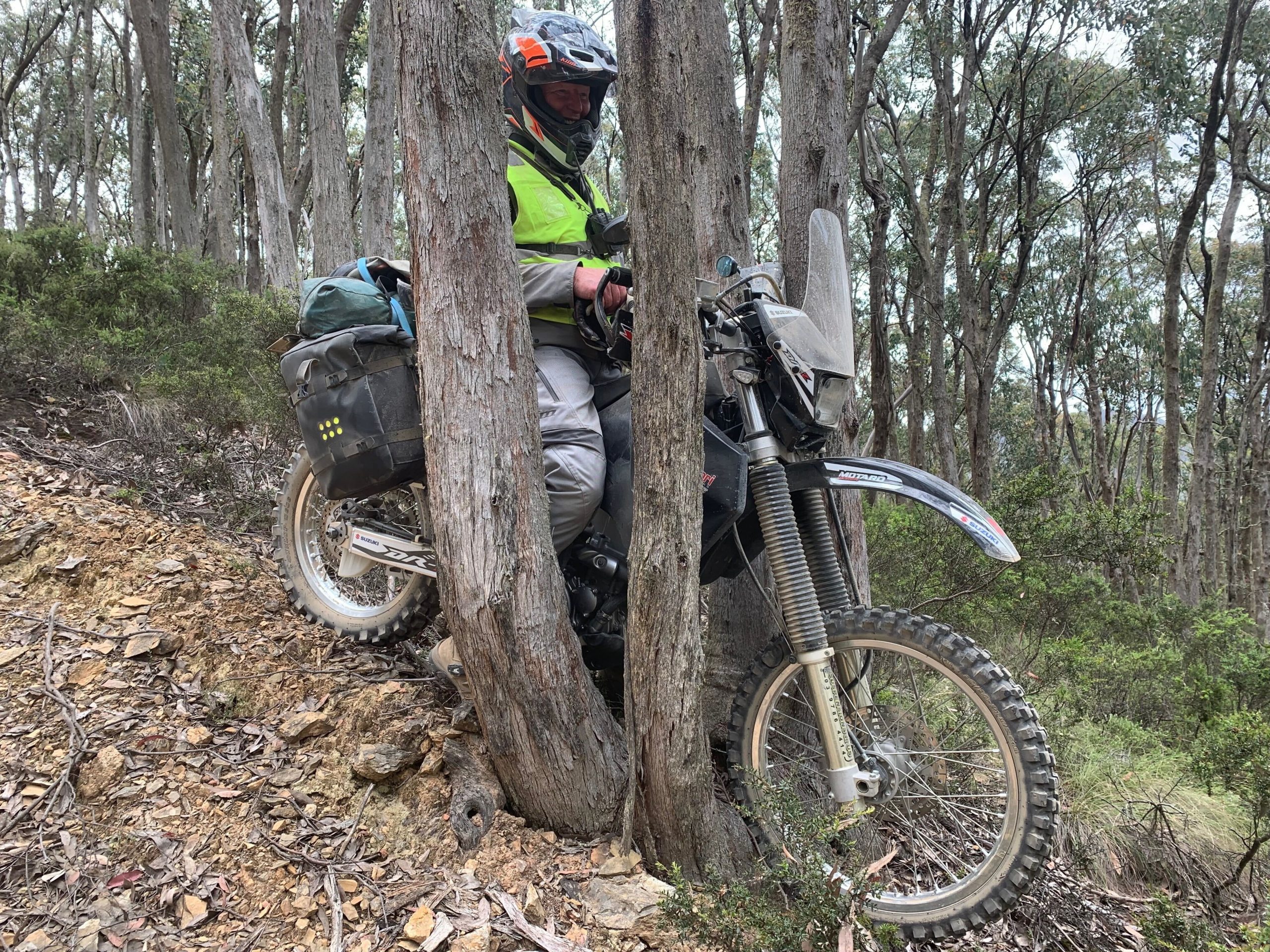 It took the strength of all four of us to move the mighty DR backwards up the track and onto a line Tim could then send it downward. It was a brief interruption to a real 4+ grade challenge which we were all quite proud to complete before reaching our lunch stop in Woods Point. 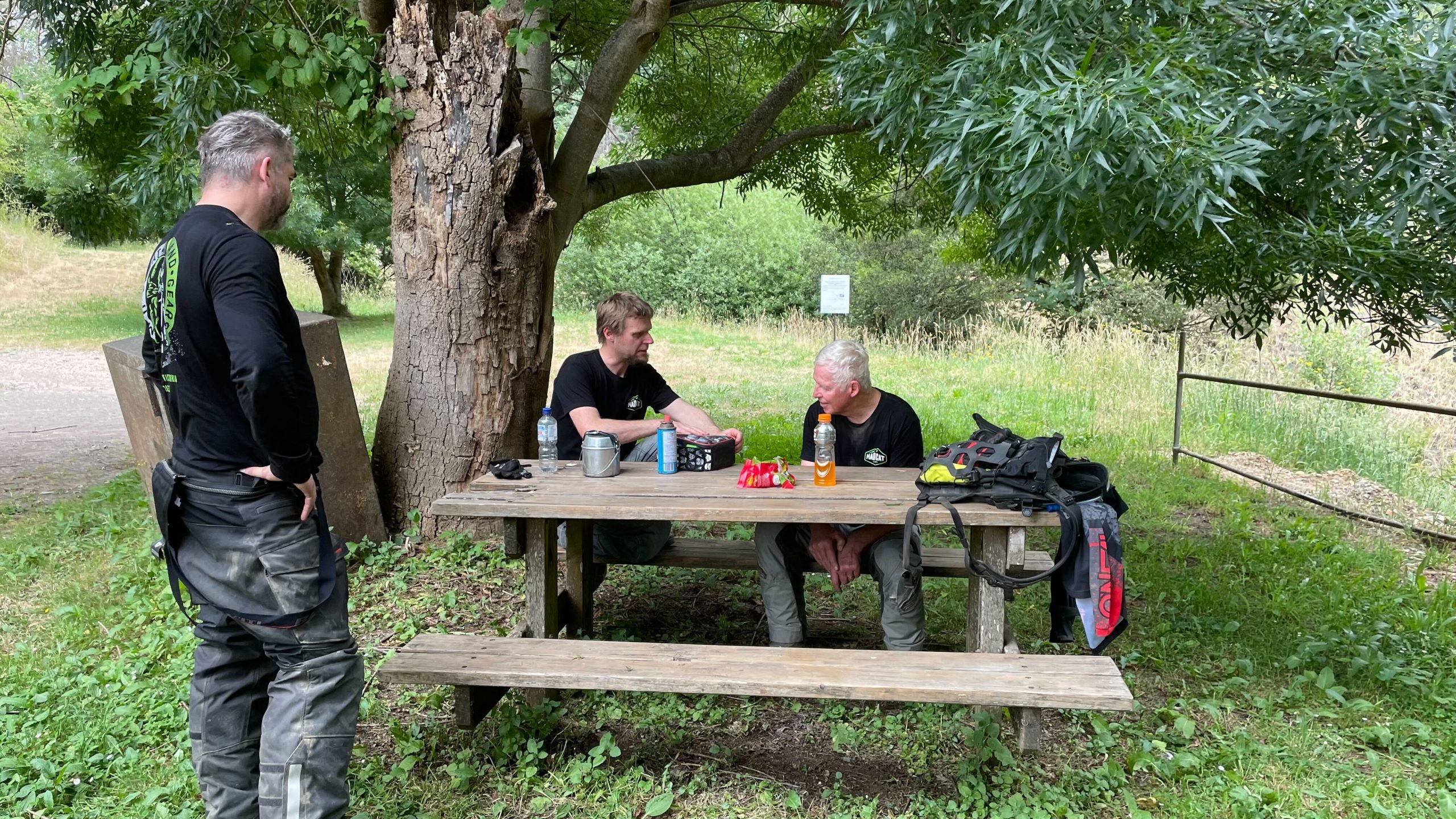 We headed north to Jamieson after lunch, tackling the third spur of the day – German Spur Track, followed by Flourbag Track as the day grew hotter and hotter. German Spur in particular was highly challenging, and we were all stoked to bring our single and twin cylinder machines back out on to the Mansfield-Woods Point Road for a short breather and rehydration before tackling Flourbag Track just south of Kevington.

Flourbag Track started with an easy river crossing at Moonlight Creek before ascending along a medium difficulty 4WD track. The descent was made memorable for the stick strike on Dean’s panniers, which managed to punch a sizeable hole into the side. He was thankful it wasn’t his leg, or something even more valuable. The new generation KLR650, was getting a right torture. 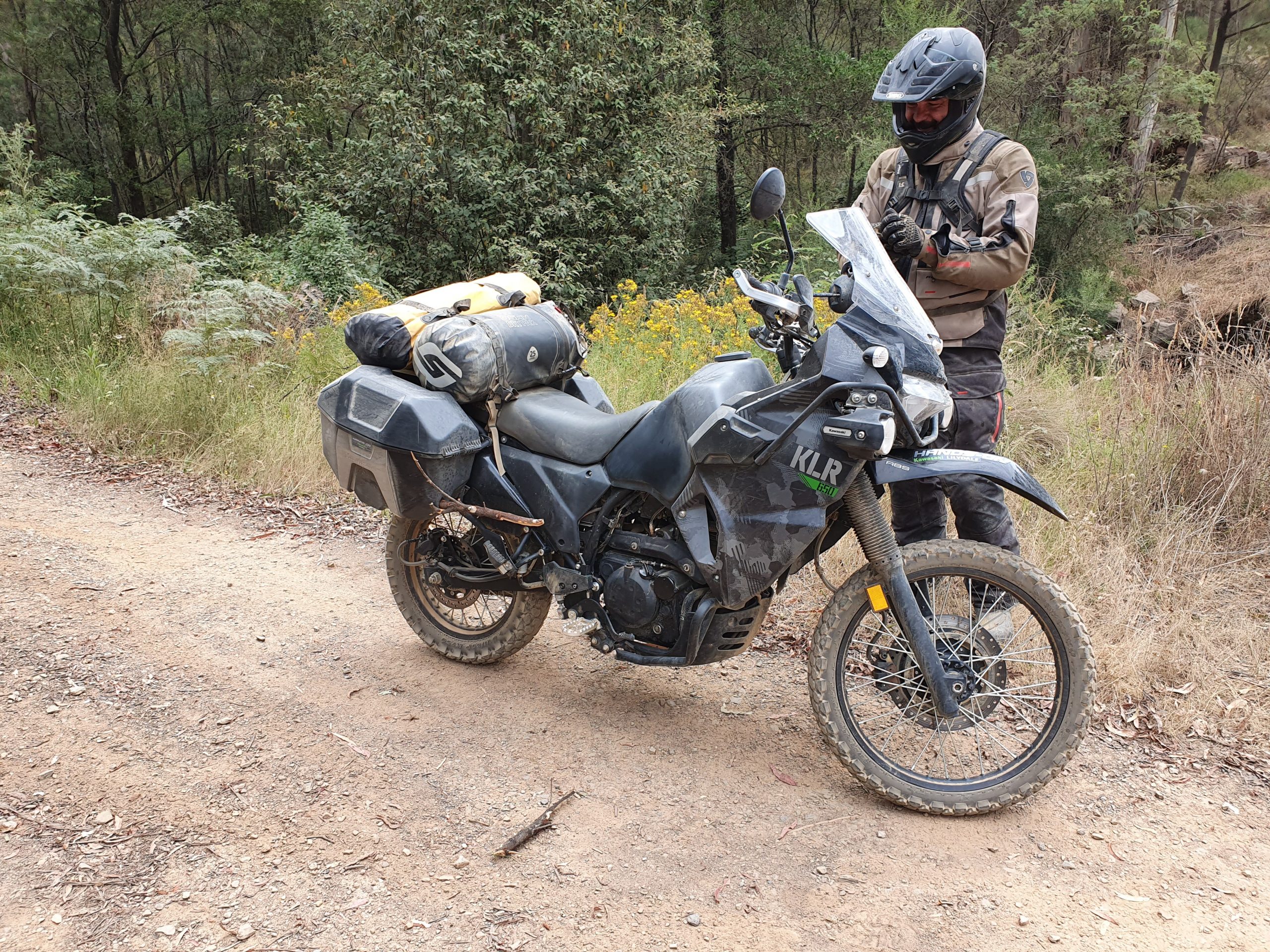 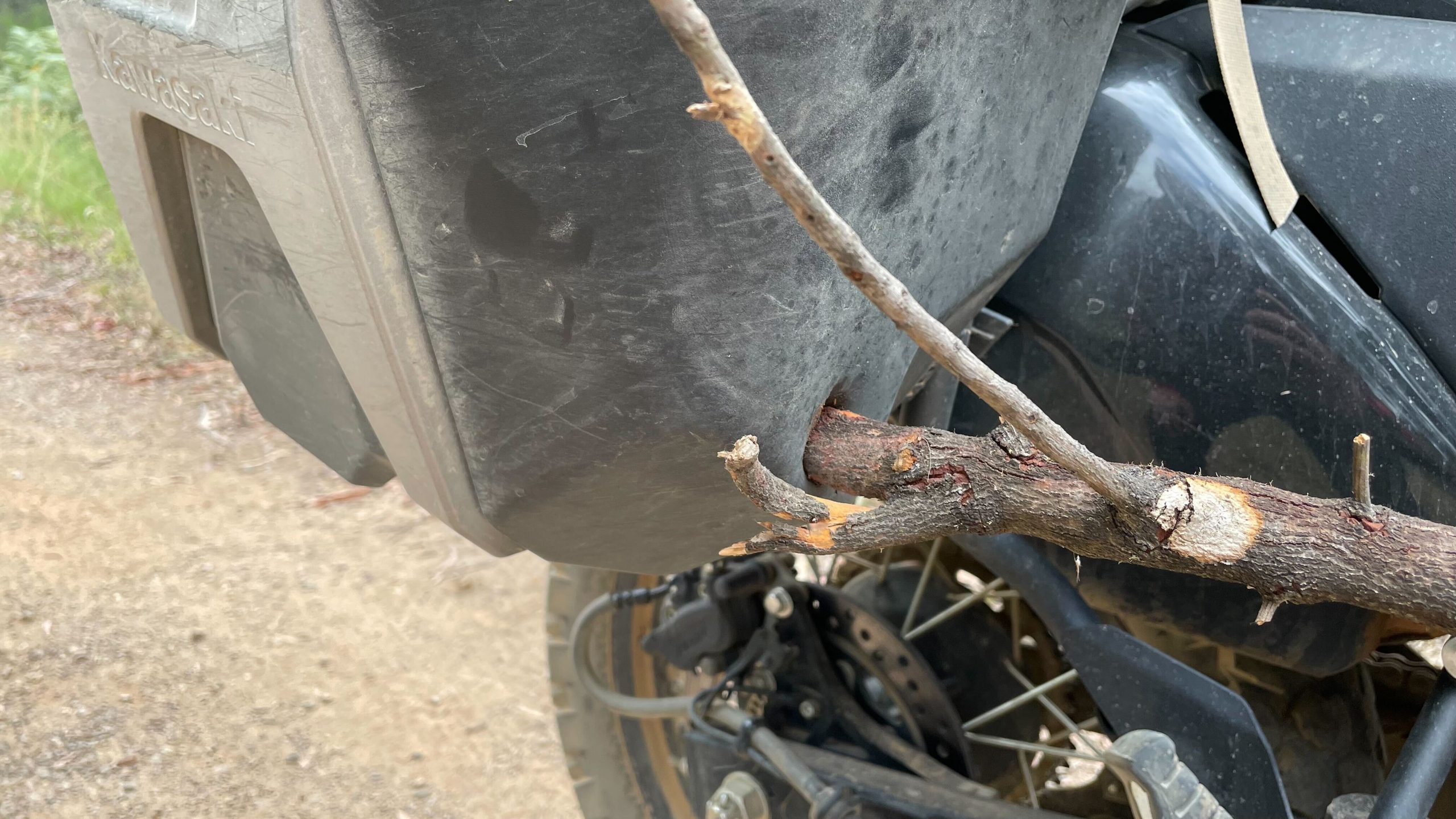 We’d made good time, and exited Flourbag just south of Kevington. Heading north the gravel quickly gave way to tarmac and we raced to brown fizzy waters in Jamieson.

Sticking with mid-strength and cokes, we stayed only a short-while (but long enough  to nod at least seven other motorcyclists with similar thoughts) before headed east to set up camp, and have a bath in the Jamieson River at Granny’s Flat Campground. 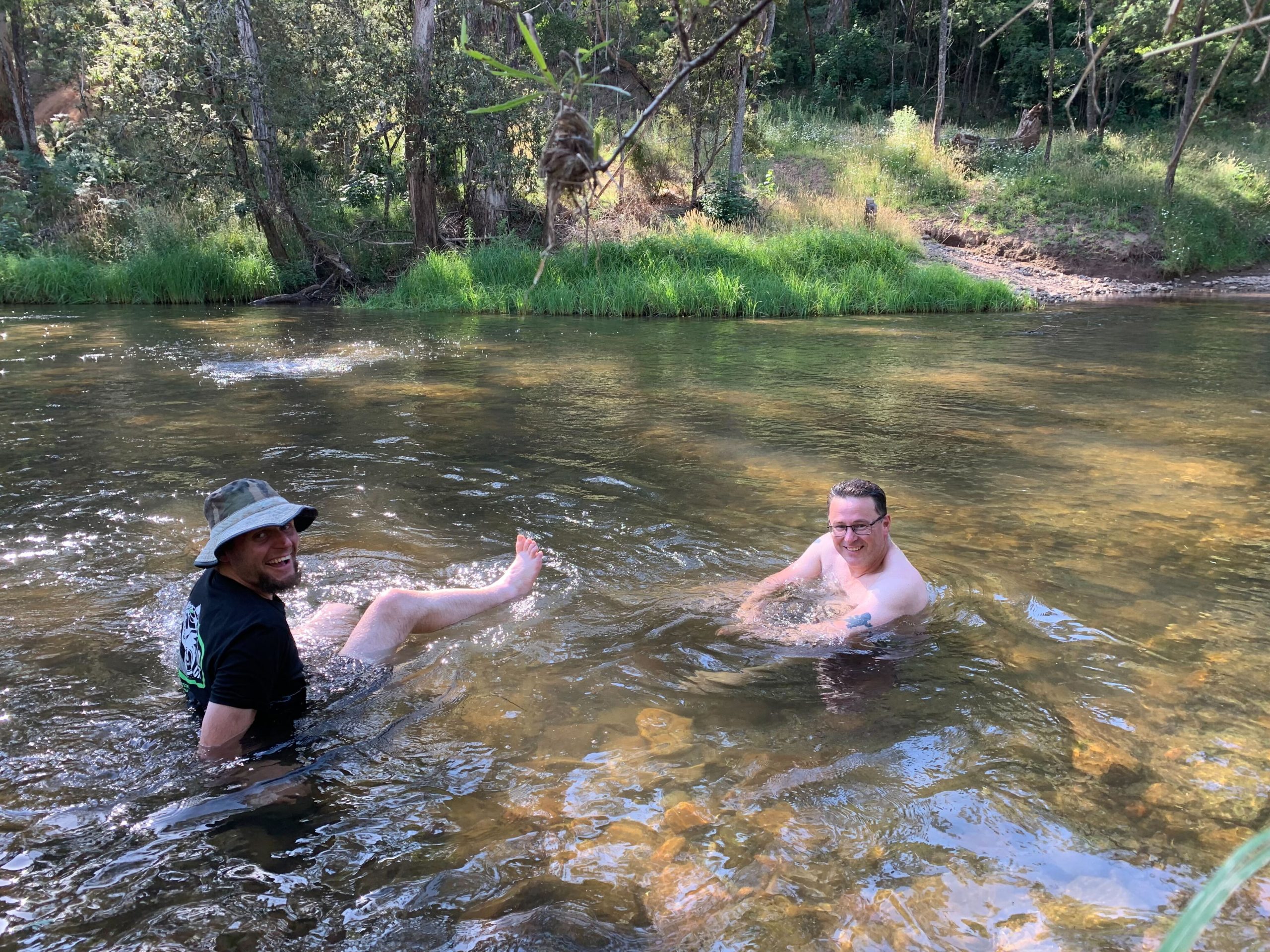 The camp ground was mobbed and while we were back in Jamieson for the obligatory parma, chips and salad, a group of five Melbourne motorcyclists (two Royal “Daltons”, a new Pan-America, a new gen KLR650 like Dean’s, and a rented CFMOTO) crowded into our camping spot. 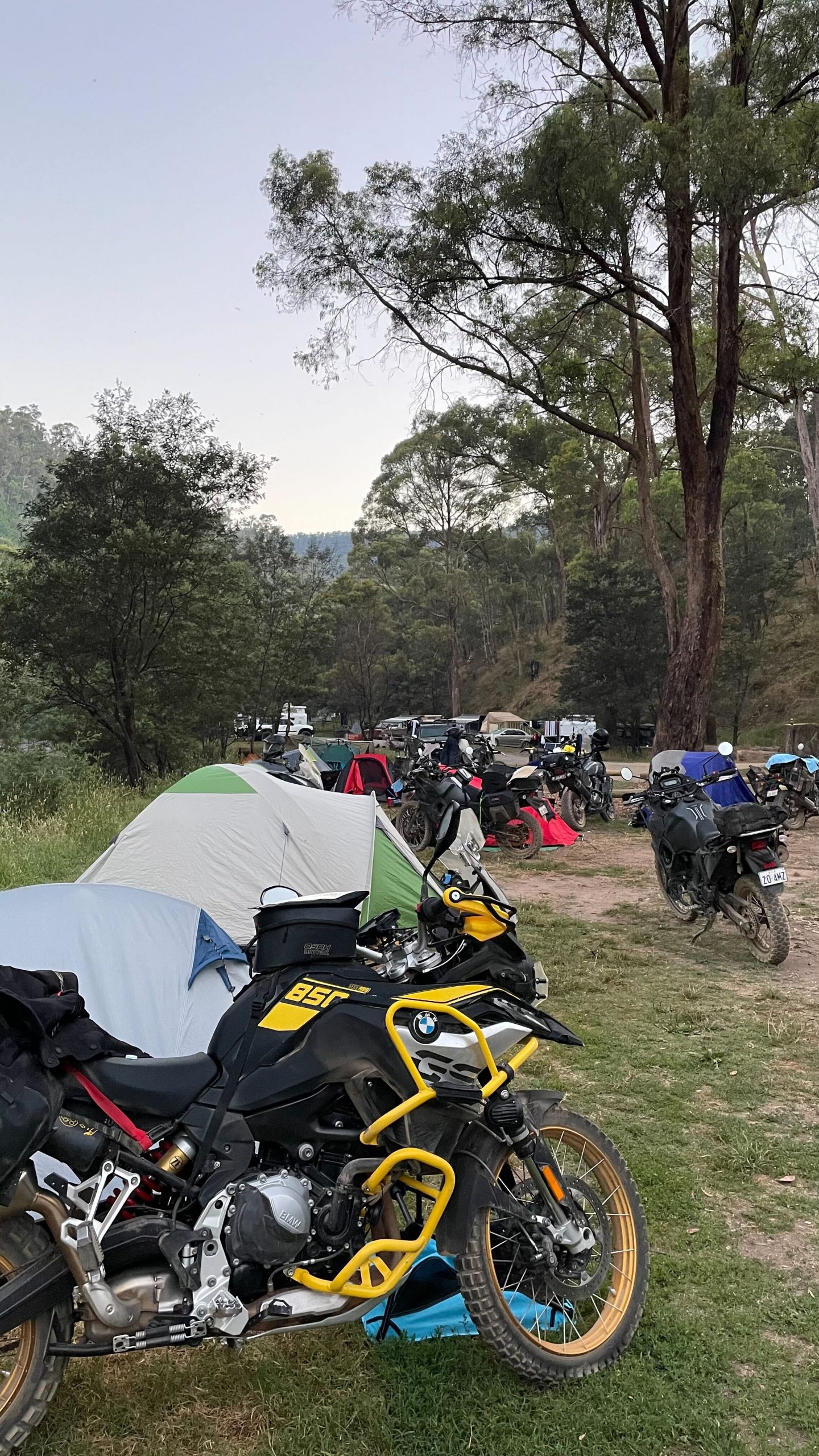 Taking in the median age of these newcomers, Tim decided that the scene was ageing him and began mulling over a new hobby; basket-weaving, free-diving, and water-polo were proffered before he decided simply not to engage with these Jonny-come-latelys.

Day Two had us up on the road before 7am, and while Robbo feasted on porridge at camp, the rest of us demanded egg and bacon rolls at the Jamieson General Store.

Fed and watered, we were back en-route over the Eildon-Jamieson Road at 8.30am – a spectacular tarmac climb over Cummings and Bald Hill Gaps with views over Lake Eildon. 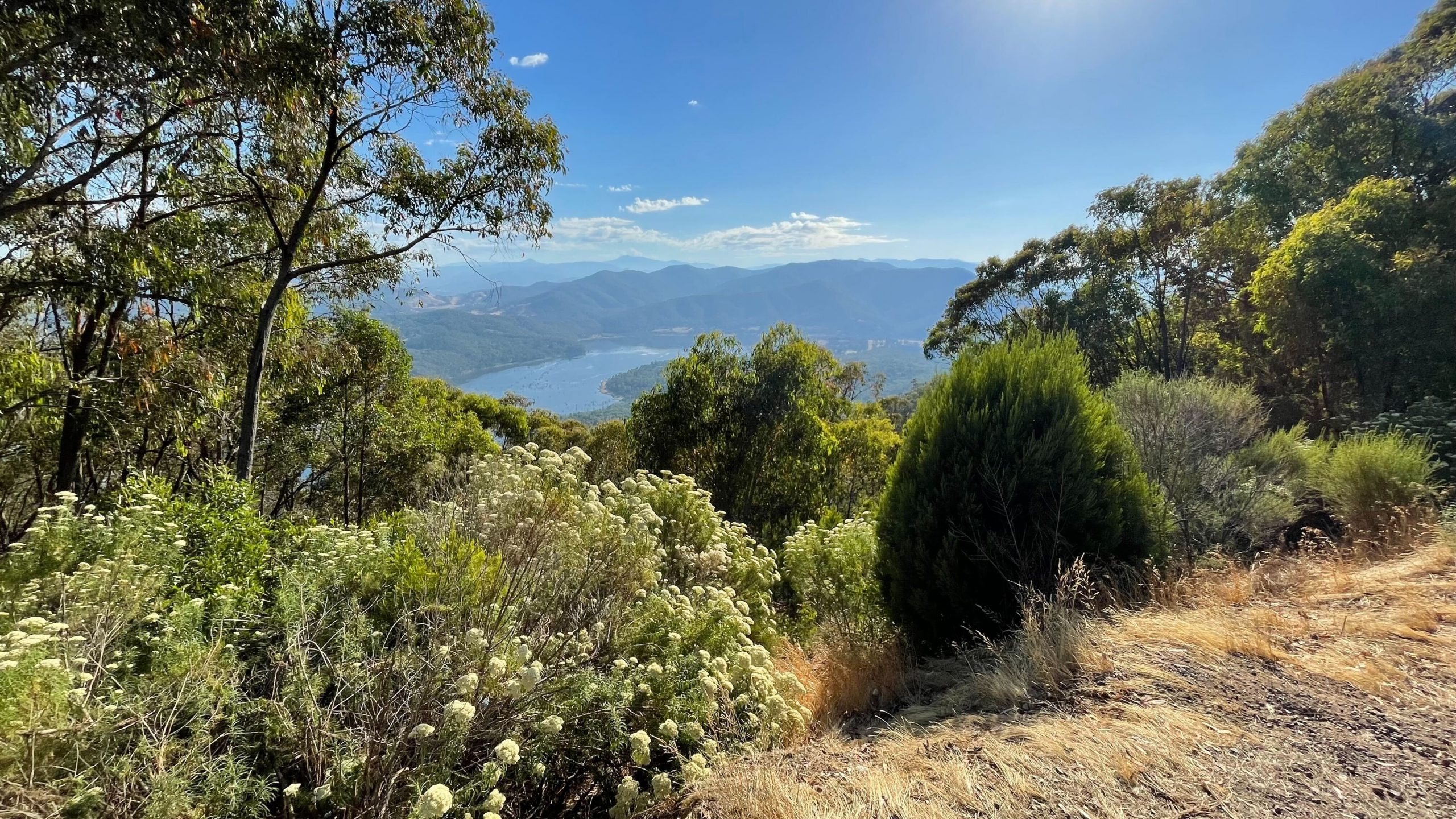 We turned on to Dray Track and skirted our final ridge-line track to just over 1000m, before heading west to Cumberland Junction. Finding ourselves with most of the planned off-road route complete for the ride, we split, with Dean and Tim heading south back through Warburton and Andrew and Robbo west for a brief stop at Marysville so they could each plot a few tracks for the afternoon.

Robbo went exploring to see where the border of the forbidden water lands was, while Andrew managed to get well and truly side-tracked in parts of Toolangi State Forest. Both ended up finding interesting routes for future rides.

A memorable overnighter, made enjoyable by great weather, mate-ship and over-coming new riding challenges for many of us.