It was always going to be a baker. Meteorologists have long since moved on from the days of crystal-ball gazing and trawling through the entrails of owls to make a prediction about the weather. Whatever the favoured resource, the weekend of the Rocky Mountain High Ride was always going to be hot. Blind Freddy, and even Uncle Arthur’s mongrel dog could have told you that.

I use the Goldilocks Classification for riding weather. Papa Bear is 25 degrees plus, Mama bear is 11 degrees minus, and Baby Bear ( just right ) is 16 to 24 degrees. The forecast for this ride was definitely in the Papa Bear class. The rest of the Bear family were taking a vacation.
Temperatures were predicted to tap out in the mid thirties for both days.
You feel me right? Solution: get some altitude. Adiabatic cooling ….principle of thermodynamics. The higher you go, the lower the atmospheric pressure, the air mass expands, and voila, the air gets cooler. Enough of the blah blah blah, that’s all we need to know for now.
So with that in mind, the route was designed to get some altitude quickly to avoid the ‘ I love a sunburnt country, A land of sweeping plains’ stuff, where the heat can be punitive.
Eleven of us climbed into our sauna suits and hightailed it out of Yarra Junction just as the temperature was getting into the lower end of the Papa Bear range. Riding shotgun for part of the day was El Capo and Guru Bob, the latter peeling off about an hour into the ride to go and find some gangsta tracks, as is his wont. The temptation of his newly refurbished Chicken Chaser was too much, and I suspect he was out on a sneaky Sat morning in defiance of his significant other’s attempt to keep him grounded for the weekend.
The first part of the ride took us up the first two-thirds of the ‘some of us have done it so many times we could do it in our sleep’ Acheron Way, turning right onto Feiglins Rd, and wending our way through to the liquorice strip that is the 512. A brisk squirt into Marysville, where we jettisoned the Robster, and then north to Mt. Margaret Rd which joins the Blue Range Rd that runs east side of the Cathedral Range. This was part of the route for the partially aborted Steppenwolf ride of several months ago, where Mother Nature wreaked havoc, and laid a bunch of soon-to-be-firewood over the road at far too regular intervals. An easy ride on an essentially two-wheel drive dirt road in temperatures that sat snugly in the middle of the Baby Bear category. So far, so good. Ze plan, she is vorkink!
The Thornton pub crooked it’s finger at us as we rode in, with leafy shade for the bikes and a hearty lunch. A blast of heat as we walked out couldn’t dampen our spirits and we headed for Eildon and Jerusalem Ck, while El Capo sidled off home.
A dusty road out of Jerusalem Ck with a steepish and rocky section which gave a few of us a ‘ be still my racing heart’ moment eventually led us back to the Eildon Jamieson Rd. In the end it was negotiated handsomely by everyone. A delay half way up to fix a bent gear shifter underscored how hot it was as we ‘effing and blinded’ our way through what should have been a much easier task. By now the temperature had moved emphatically into the Papa Bear range. Ze plan, she is Vorkink not!
An uneventful trip to Jamieson on the squiggly black line and a dash to Mansfield Holiday Park, arriving at 4pm, more fried than a piece of KFC.

A plunge in the pool was the curtain raiser to a fine evening. A desultory approach to setting up camp on a beautifully manicured grassy area was followed by a rush to the microbrewery next door for ….you guessed it….beer and pizza. And damm fine pizzas they were, even down to the jalapeño one which had you thinking the sun was coming up in the back of your throat.
A balmy night, too hot and too early for bed, saw Tim ( the other one) and Ben pedal their treadlies into town and come back with top boxes laden with beers, red wine, ice, chips, and various other ‘ Glow-in-the-dark’ confectionary. Settling in, a fair maiden with a lamp she had just purchased and couldn’t get to work, descended on our group to enlist our help. To no avail. Sir Galahad ( heavily disguised as Dean West ) examined it, mucked around with it, pronounced it Mort, and administered the Last Rites. We went to bed soon after, separately and severally…..in case you were wondering.
Hot sun on the tent ensures an early rise the following morning. Despite the warm evening, a heavy dew cloaks the fabric. It vanishes ghost-like as the day heats, and we pack up and motor the 2 km to Brew for an epic brekky. Brew has been an institution in Mansfield for at least 45 years. I recall hungrily smashing hearty and healthy fuel there after a weekend’s skiing during the late 1970s. While it may have passed through several hands, it remains outstanding to this day.
We roll out of Mansfield in tight convoy. No dust on that there blacktop. To the foot of Mount Buller, and then take the dirt up My Stirling Rd up to what the locals affectionally call TBJ ( Telephone Box Junction).

The temperature is now 18 degrees as we head onto the Circuit Rd which runs around Mt Stirling to Mt Buller. Ze plan, again she is vorkink! The sun is shining and the air crisp. There is a God after all. The road is well-maintained as it is an access road for both fire and forestry. It leads us to photo-op alert mentioned by The Robster when I got him to run his gimlet eye over the route.

A truly speccy find. Hues of blue as your eye travels north over the ridge lines of several ranges. And the hut, set in a meadow above the snowline, dotted with summer daisies, granite boulders, tough and tortured snow gums, small in stature, hardy in nature. Pure unadulterated magic. Well worth the sphincter- tightening 10 min side trip off the Circuit road. 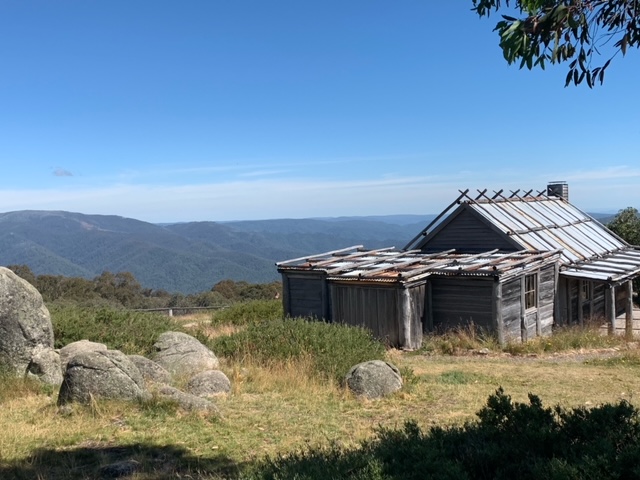 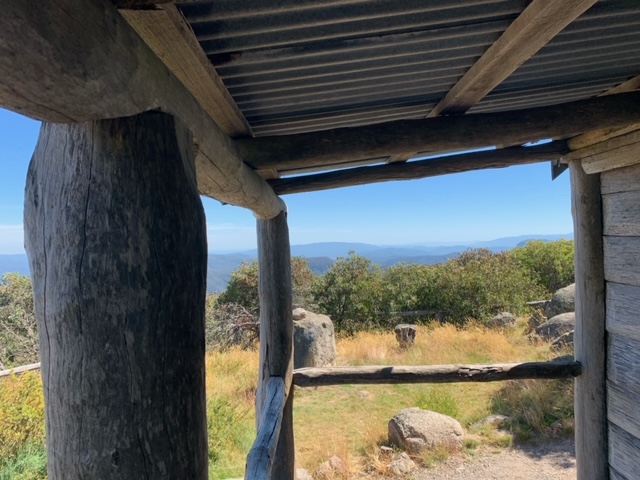 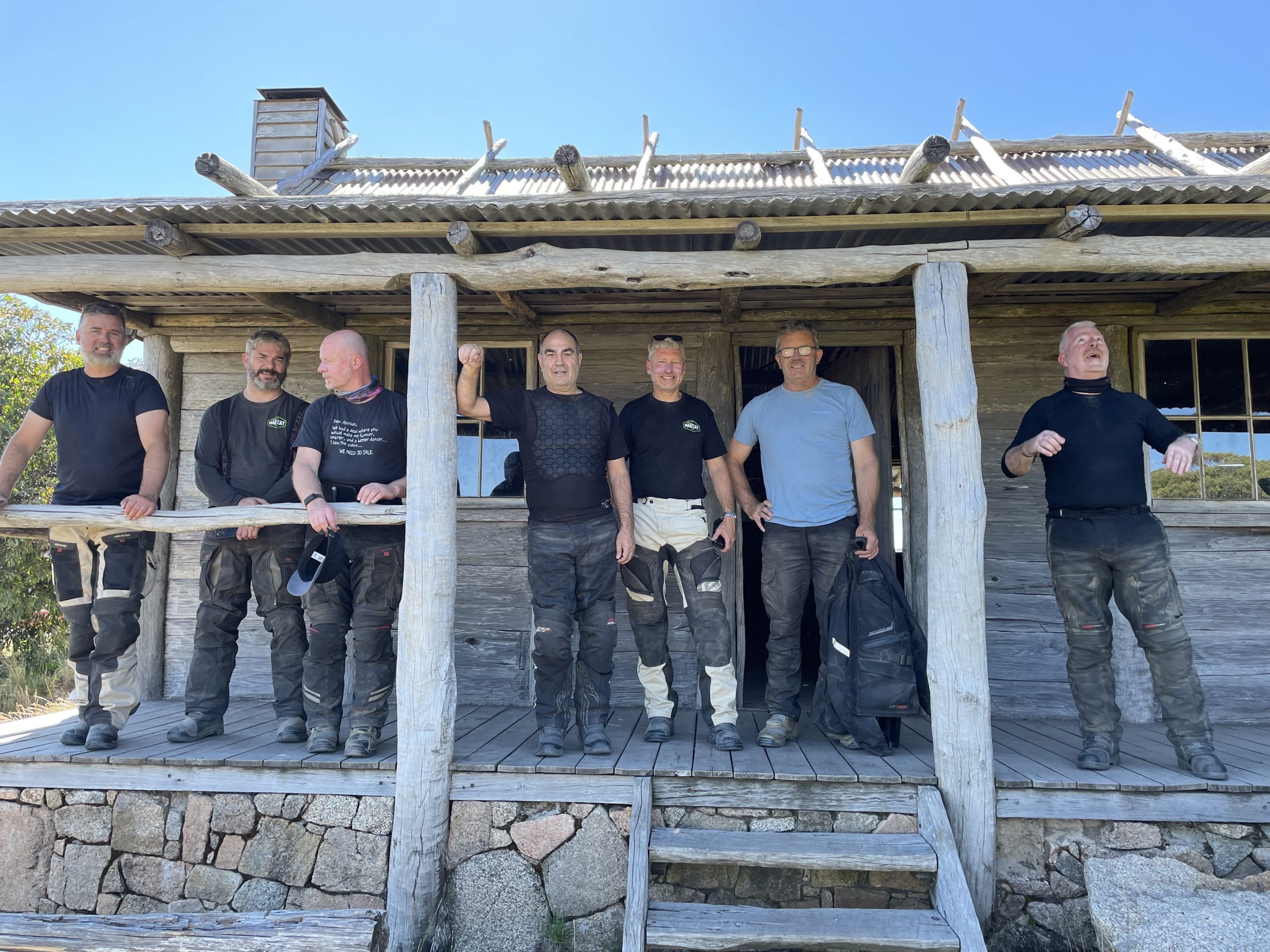 Rejoining the Circuit Rd, the loose gravel disappeared, the corners flowed, the camber perfect, the pace quickened. All of a sudden, everyone is Toby Price….if only.
By the time we reached the Mount Buller village, Baby Bear was sated. He put down his spoon and let out a satisfied burp. What goes up must come down. Mt Buller at 1600 metres back to Mansfield at 321 metres for lunch. The ‘Land of sweeping plains’. As we plummet to earth, the mercury rises.

Mercifully the median strip provides shady trees for bikes and beings and a light lunch and cool drink and Papa Bear is getting angrier by the minute as we depart for Bonnie Doon and the Skyline Road. Now 34 degrees, no breeze, and the dust hanging heavy. Skin wrinkling like an anaemic prune inside our space suits. A truly breathtaking view over Lake Eildon from very high up, but stops kept brief because of the enervating heat.
Eildon achieved just before 3pm, with the prospect of another couple of hours of heat and dust back to Yarra Junction via Snobs Ck Rd, the soft option was enacted and we blacktopped it to Healesville via the Black Spur, where an icy cold in frosted glasses was enjoyed at the iconic pub.
A kiss and swearing undying love to each other before dispersing to our respective warrens. Papa Bear incandescent with the merc at 36 degrees.
Thanks to Damo for an outstanding job leading his first ride and congrats to all the Madcat first riders, Brian O’Donahue, Graham White, Tim Russell and Darren Foster.
If success has many fathers, and failure is an orphan, then everyone’s contribution to this ride ensured it was never going to be the latter.
Casualties: one bent gear shift lever ( soon fixed)
One heat blister when one Tim handled the hot exhaust on the other Tim’s bike ( a rookie mistake that I have made more than once)
Text: Tim Stolz
Images: Damian McGrath, Tim Stolz