This was a last-minute ride posted by Wayne, which promised nothing more than to be of unknown difficulty, and with a route which probably wouldn’t (or couldn’t) be followed.

The description made my decision easy — The Tiger would be sitting this ride out, this is one for the DRZ. Wayne’s T7 has the reputation for being “like a dirt bike” but the same can’t be said for the mighty BMW 1200GS, arguably one of the greatest adventure bikes every made. Great for hauling you and your missus and all your worldly possessions literally across the planet (as has been the case for “upside-down” Dave), so, probably not the best bike for gnarly, sloppy, rutted-out tracks in the Toolangi state forest. 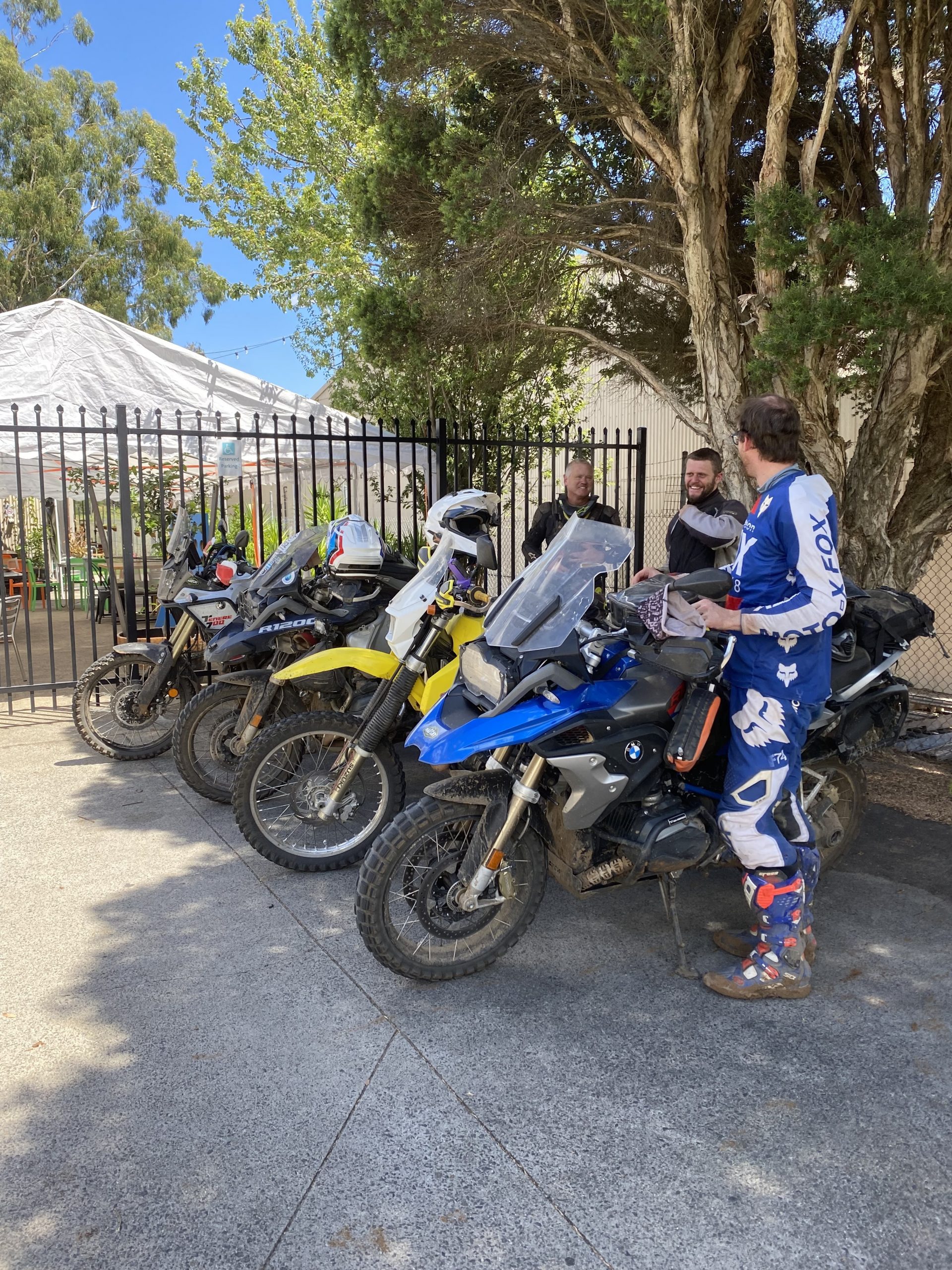 The 1200’s that rolled up at our Yarra Glen IGA meet point were polar opposites. Christian’s bike is always clean and tidy, looking like it wasn’t ridden off the showroom floor long ago. David arrived with half a 1200GS, front fairings removed, windscreen stitched up with cable ties, dirt and dust which probably came from another continent. A very well-travelled machine much like its owner who assured us that despite its looks, it was “mechanically sound”.

We left the carpark for a leisurely cruise up the slide, before turning into the dusty gravel on marginal road.

If this were a Tim Stolz ride report, there would be some reference to a book, a movie, or a song a-round-about now. Well, I’m not Tim. And there will be no such reference.

Wayne’s route starts at “Mount Despair Road (4WD)”, but — much to OUR despair, this track was closed with gates “emergency vehicles only”, so the original route went by the wayside and we continued south to see if we could pick up the track further along. 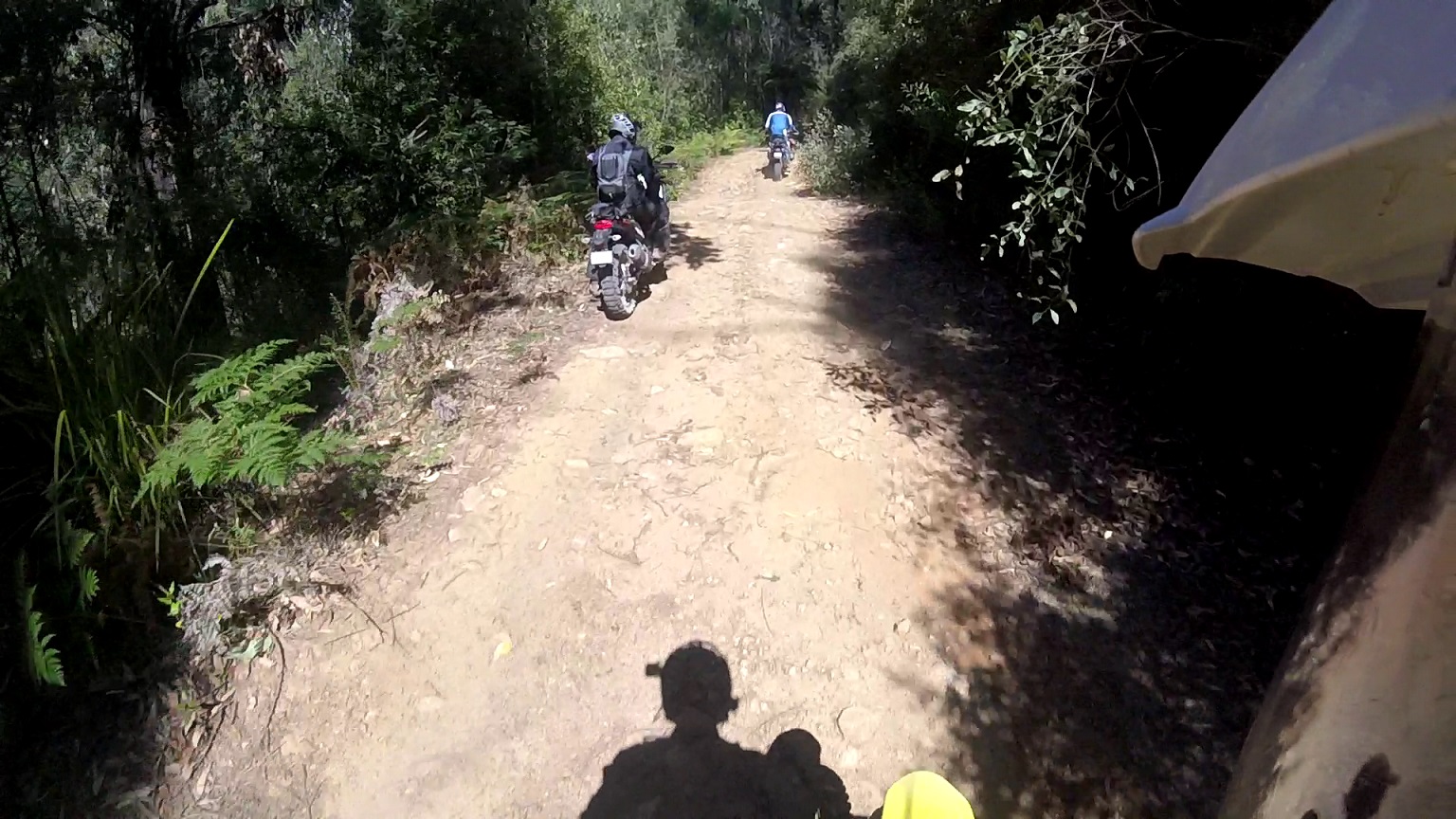 We turned onto Camp Creek road, which had a reasonably gentle climb and decent over mild rocky terrain. I followed Christian up this one, I’m always impressed by how well such a big bike can handle technical terrain, especially in the hands of an experienced operator. A good track to warm up on. 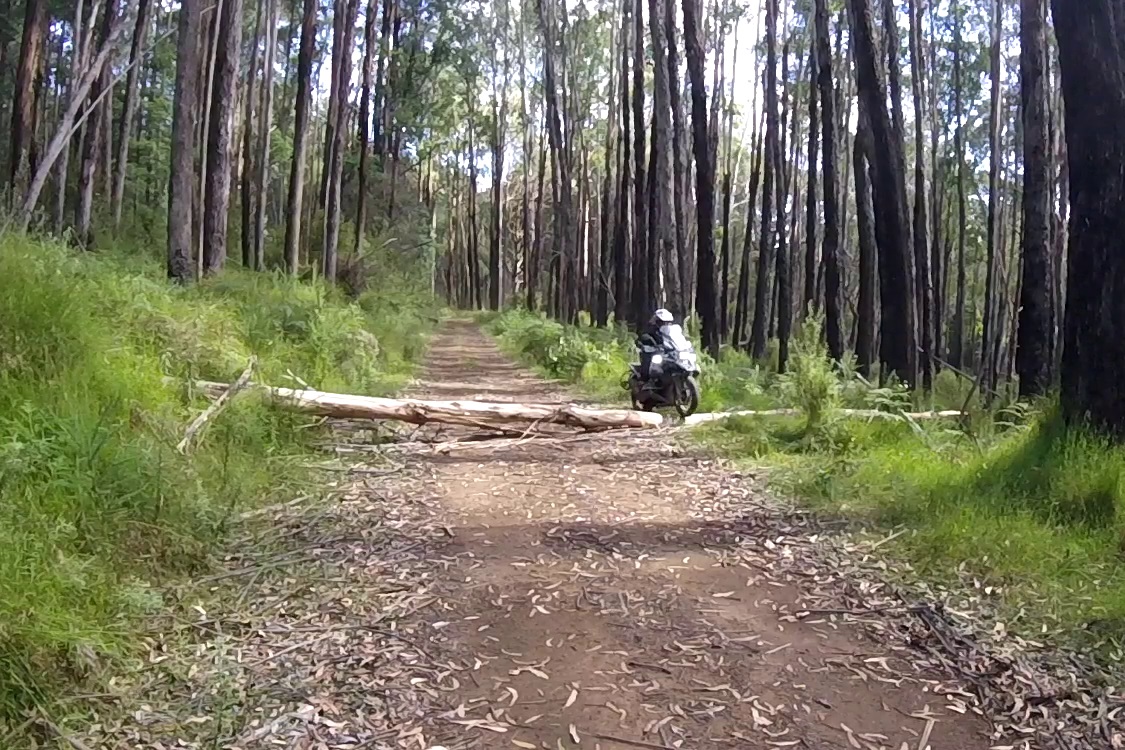 U-turn #1: Kalatha Road, bit further to the south blocked by a lot of fallen timber. 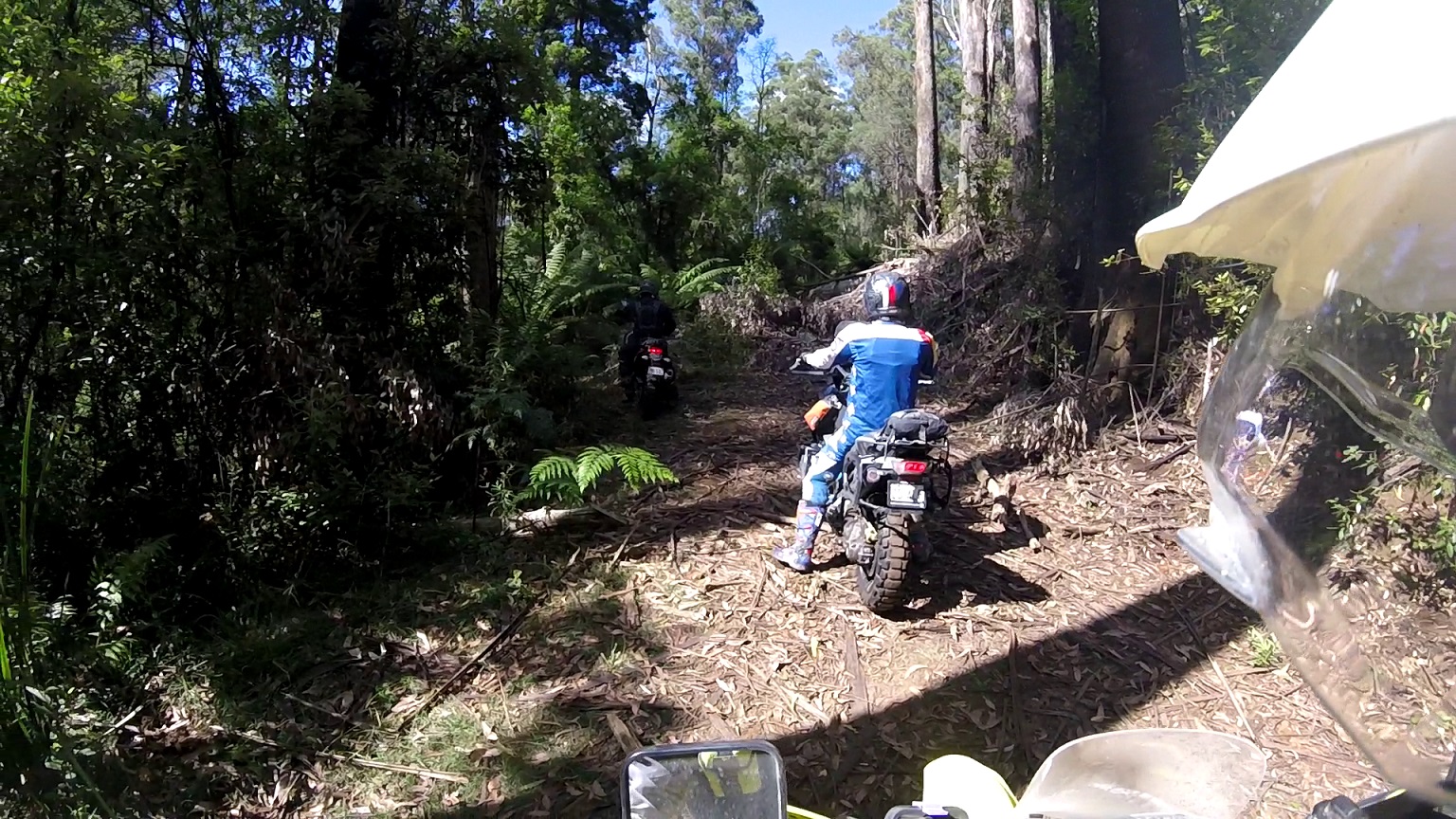 U-turn #2: The despair continues as we head up Horseyard creek Road to find the other end of Mount Despair Road gated off — not really surprised.

We had a couple of bog holes to negotiate, Dave managed to find himself the wrong line through one of them. The rest of us scouted around the edge. 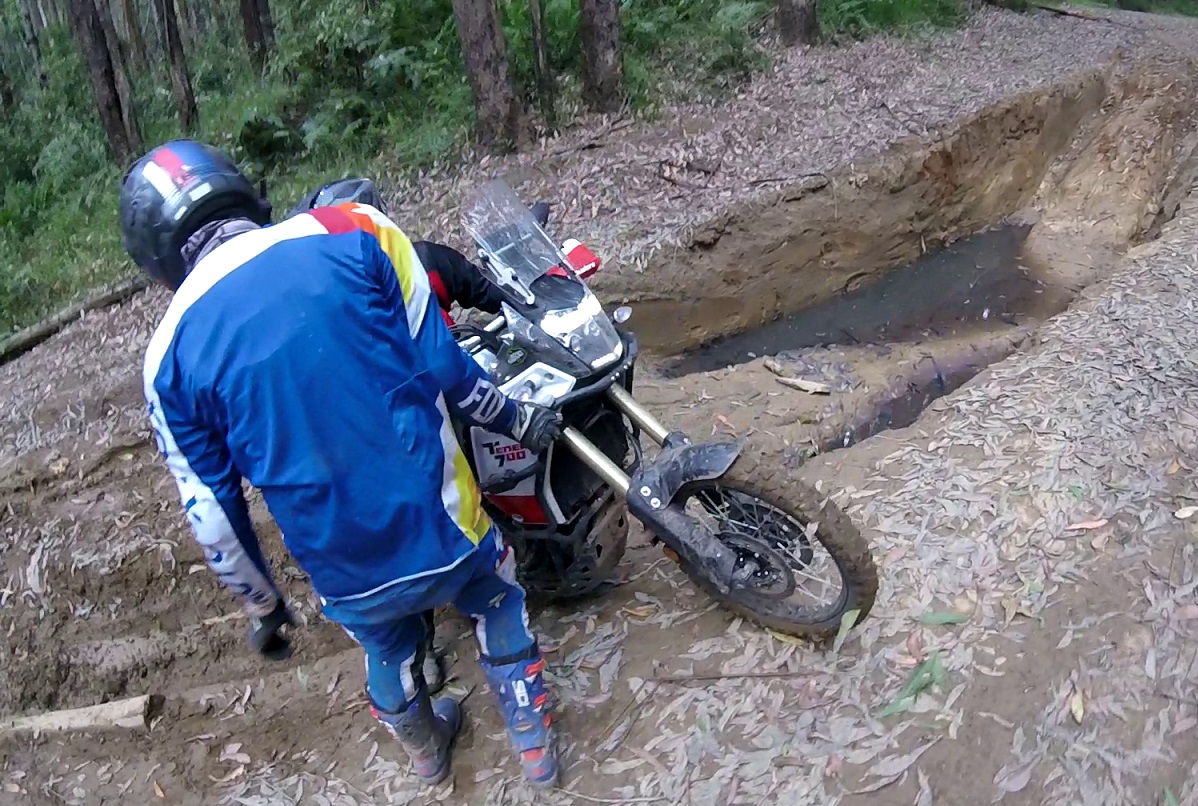 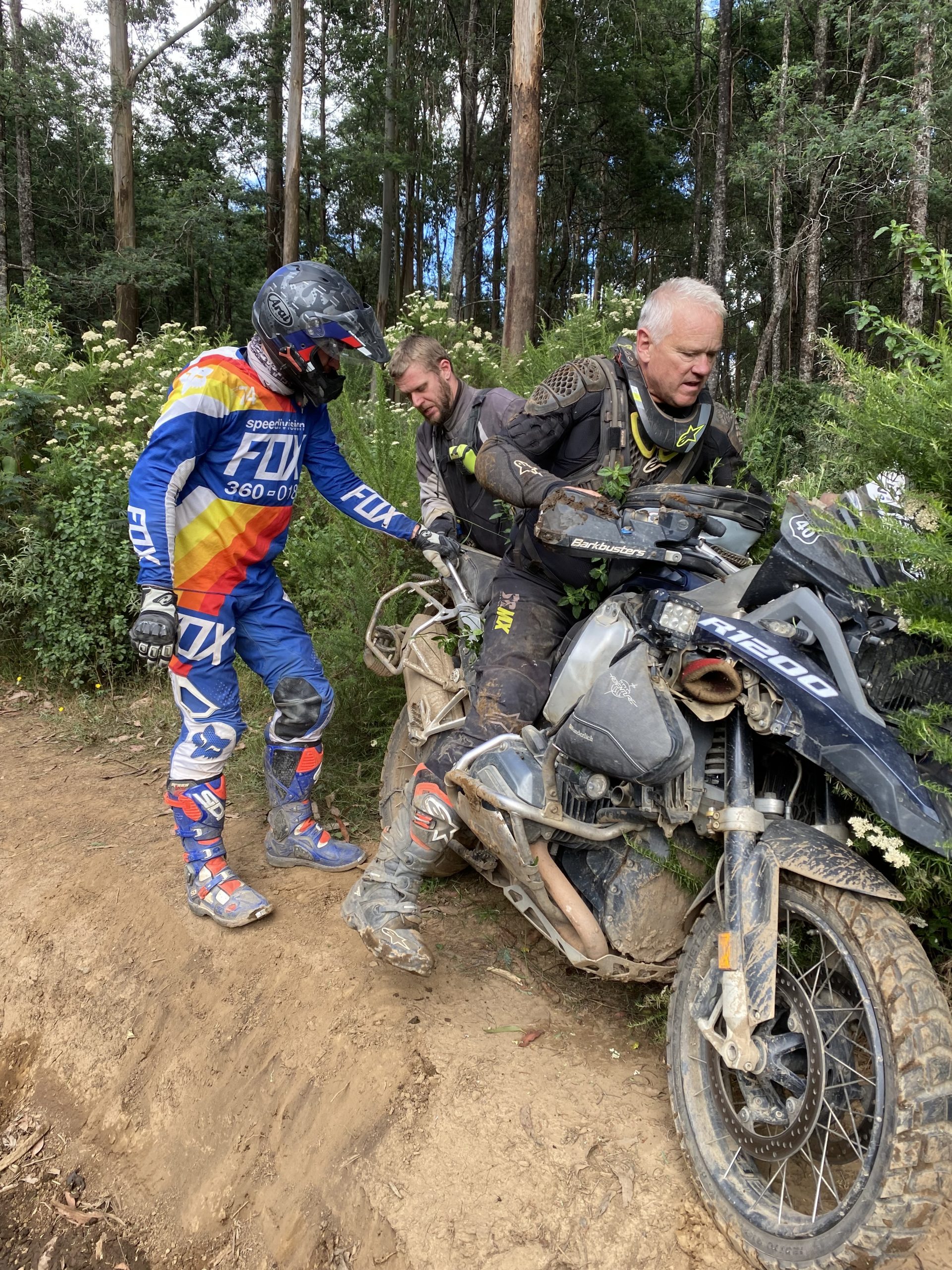 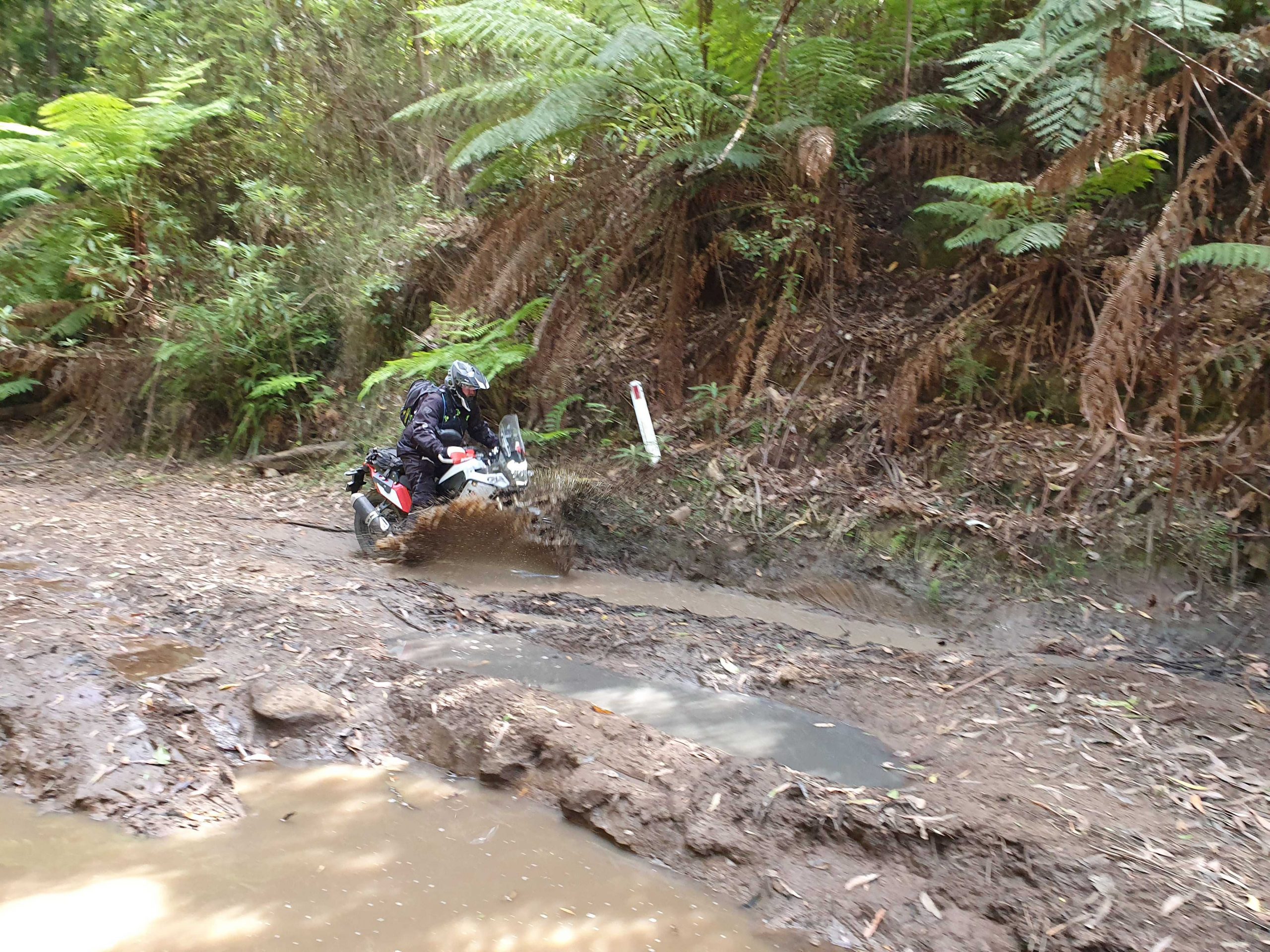 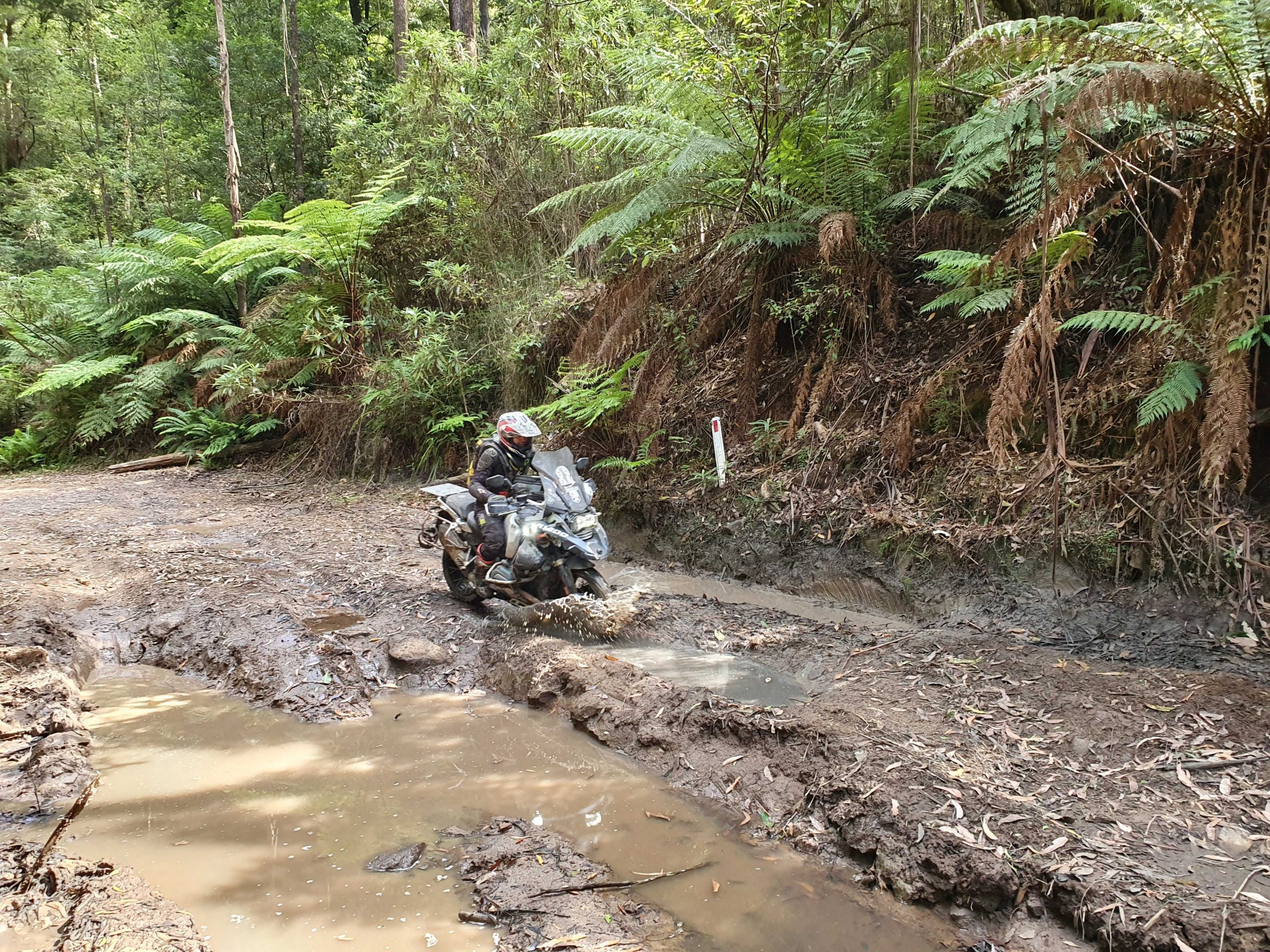 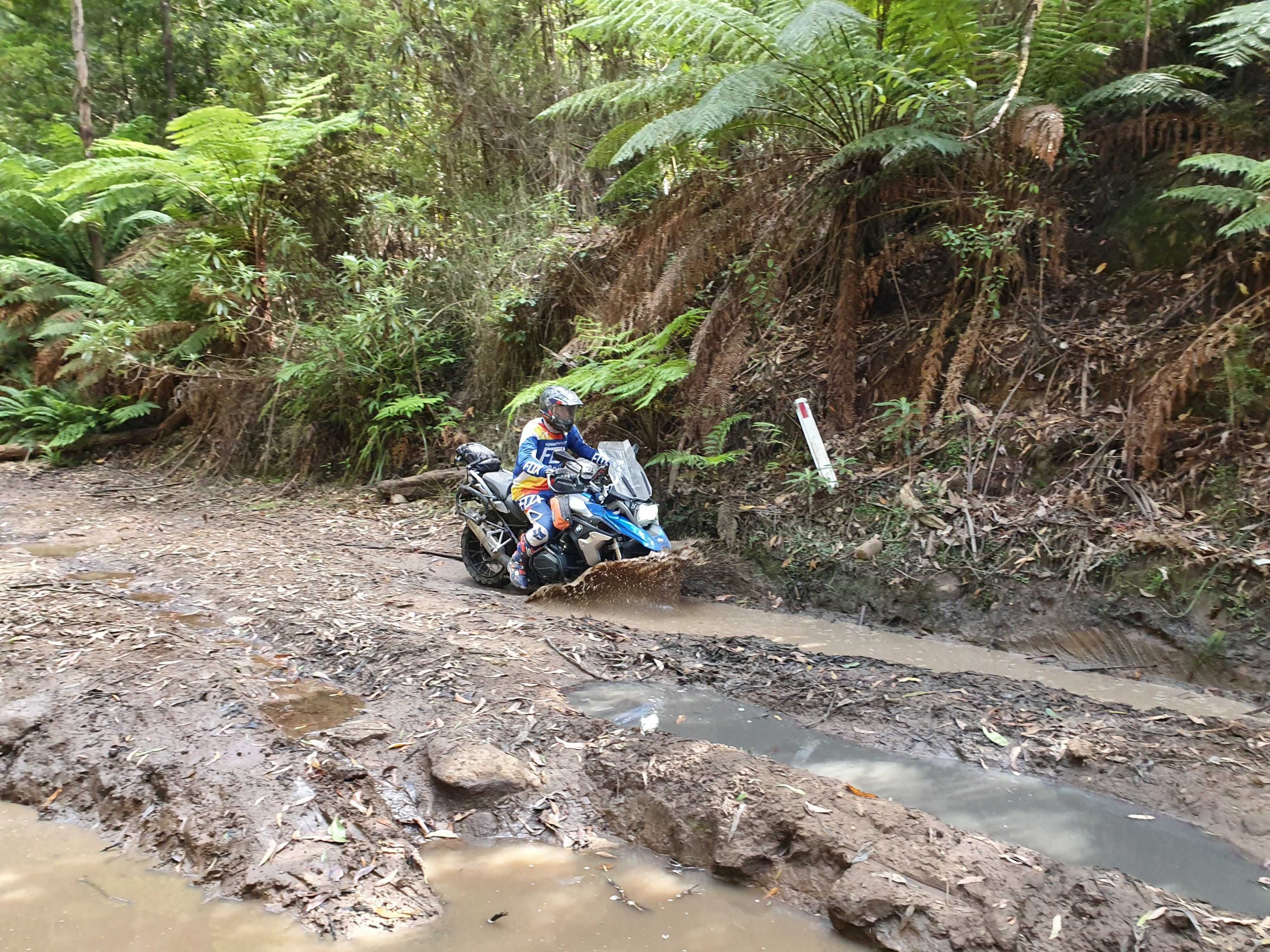 I honestly lost track of how many times bikes were dropped. The tracks were rutted so, you either had to choose to stay in the rut and risk hitting your pegs (or, in the case of a 1200GS, your cylinder heads) on the sides of the rut and being wedged in — the alternative is to ride on the high edge or centre and run the risk of slipping down and losing your footing, and toppling over. 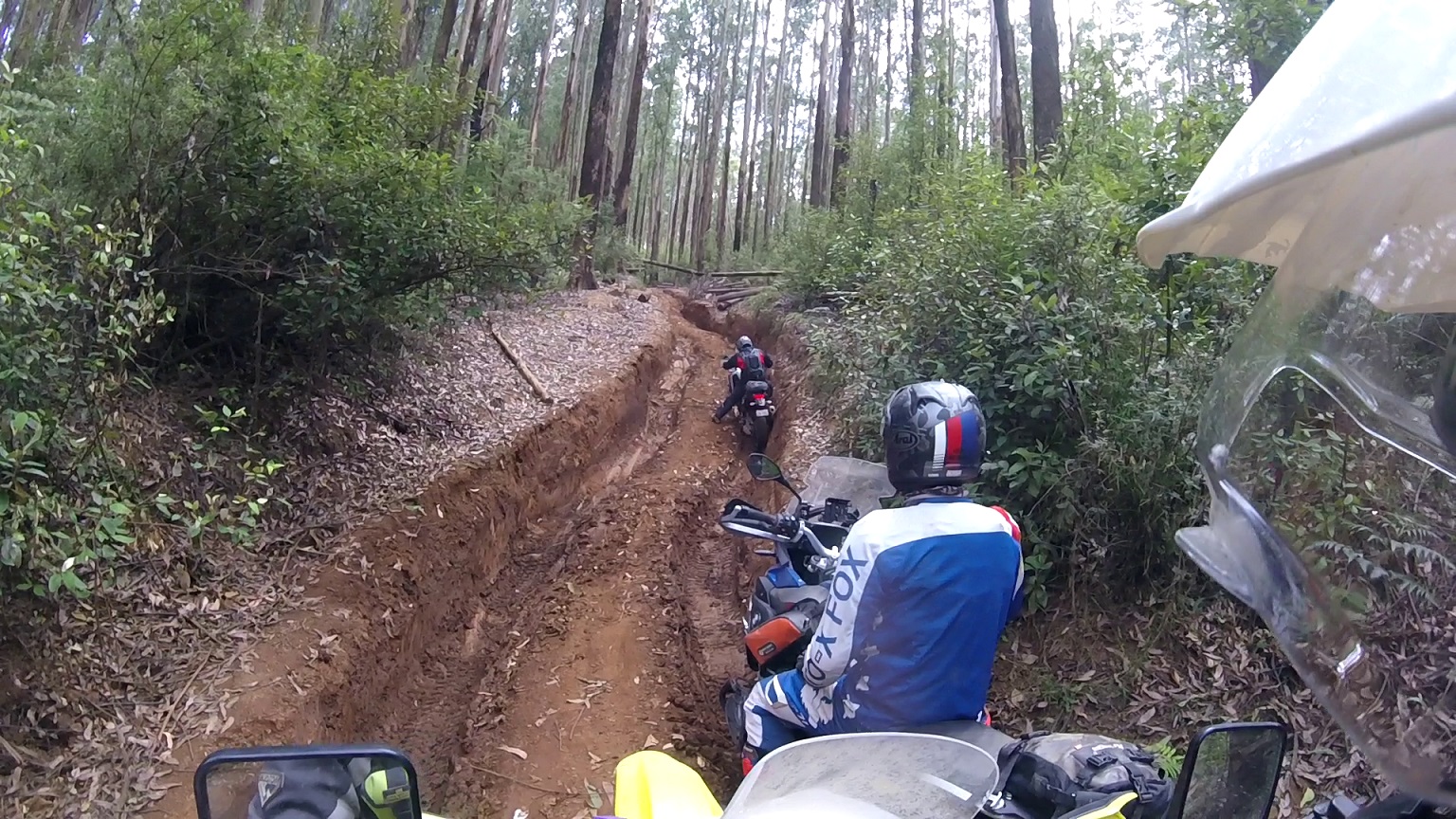 Both were tested. The consequences of getting both wrong were also experienced. 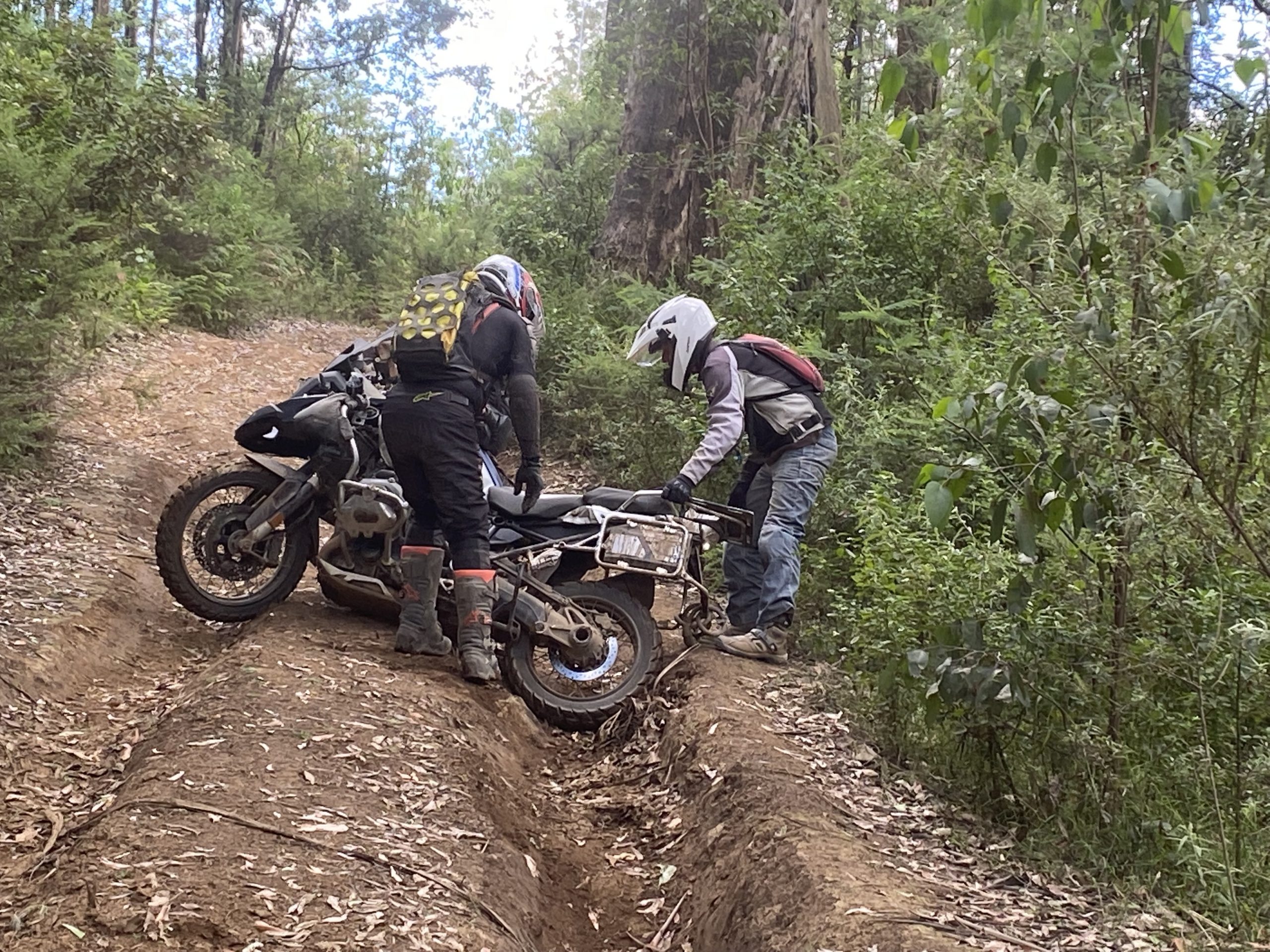 The most spectacular of which was David who, whilst taking the high ride to the left of a rut, slowed down a little too much to avoid some foliage and toppled down into the rut — the 1200 ending upcompletely upside down. 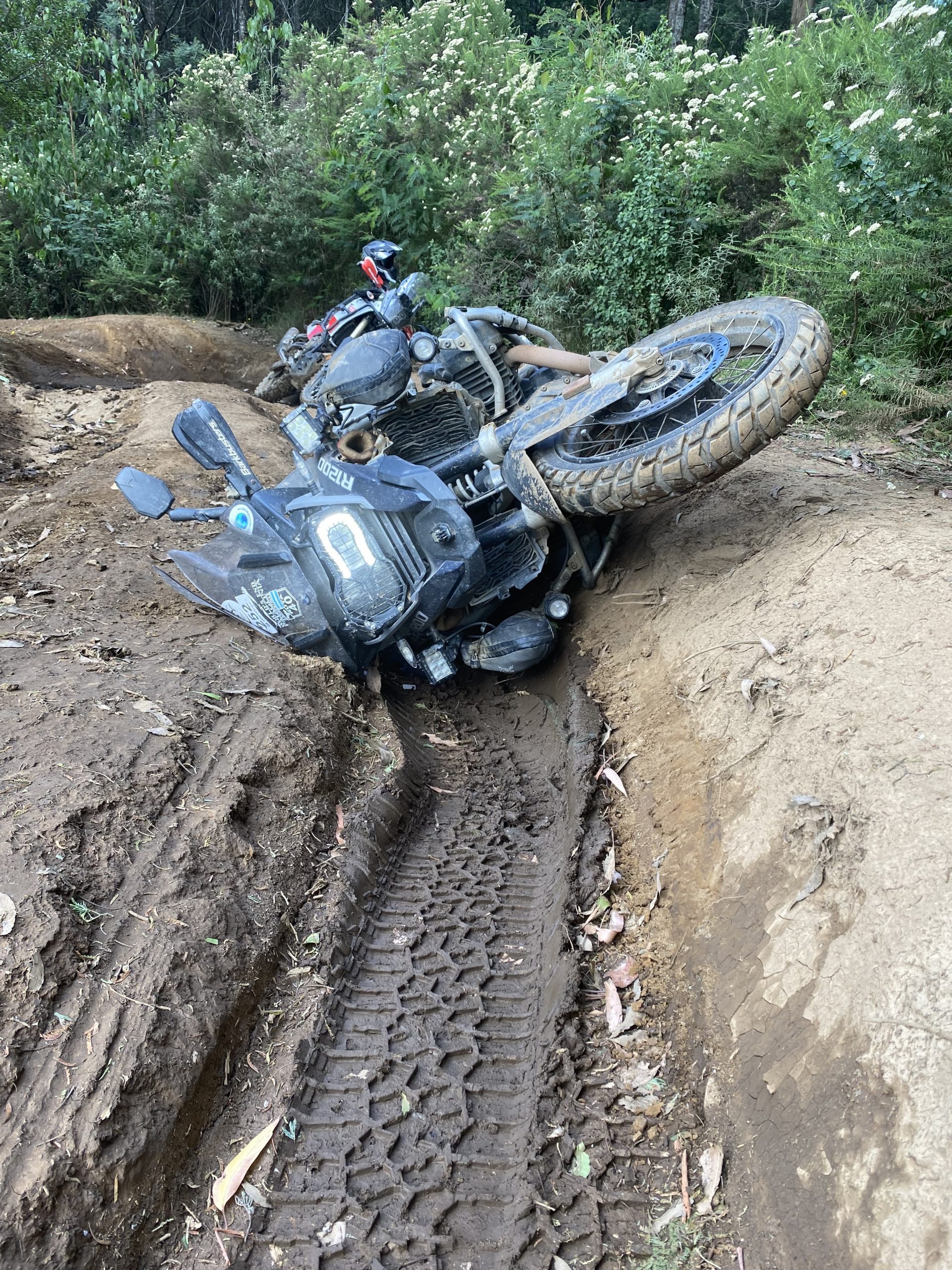 Upside-down  Dave, as he will now and forever be known, proudly proclaimed that if he had his front fairings on, they would be broken now!! Unfortunately his windscreen which already told many stories of past adventures, was not going to be telling any more. (I did not have enough cables ties to stitch together what was left). It was a colossal effort to right David’s BMW, with all 4 of us heaving it out of the ditch. But all was sorted — and we moved on.

Wayne was really looking forward to Aeroplane Track, and that was the next right turn coming up. We managed to get about 1km up the track before the ruts became too deep to navigate. 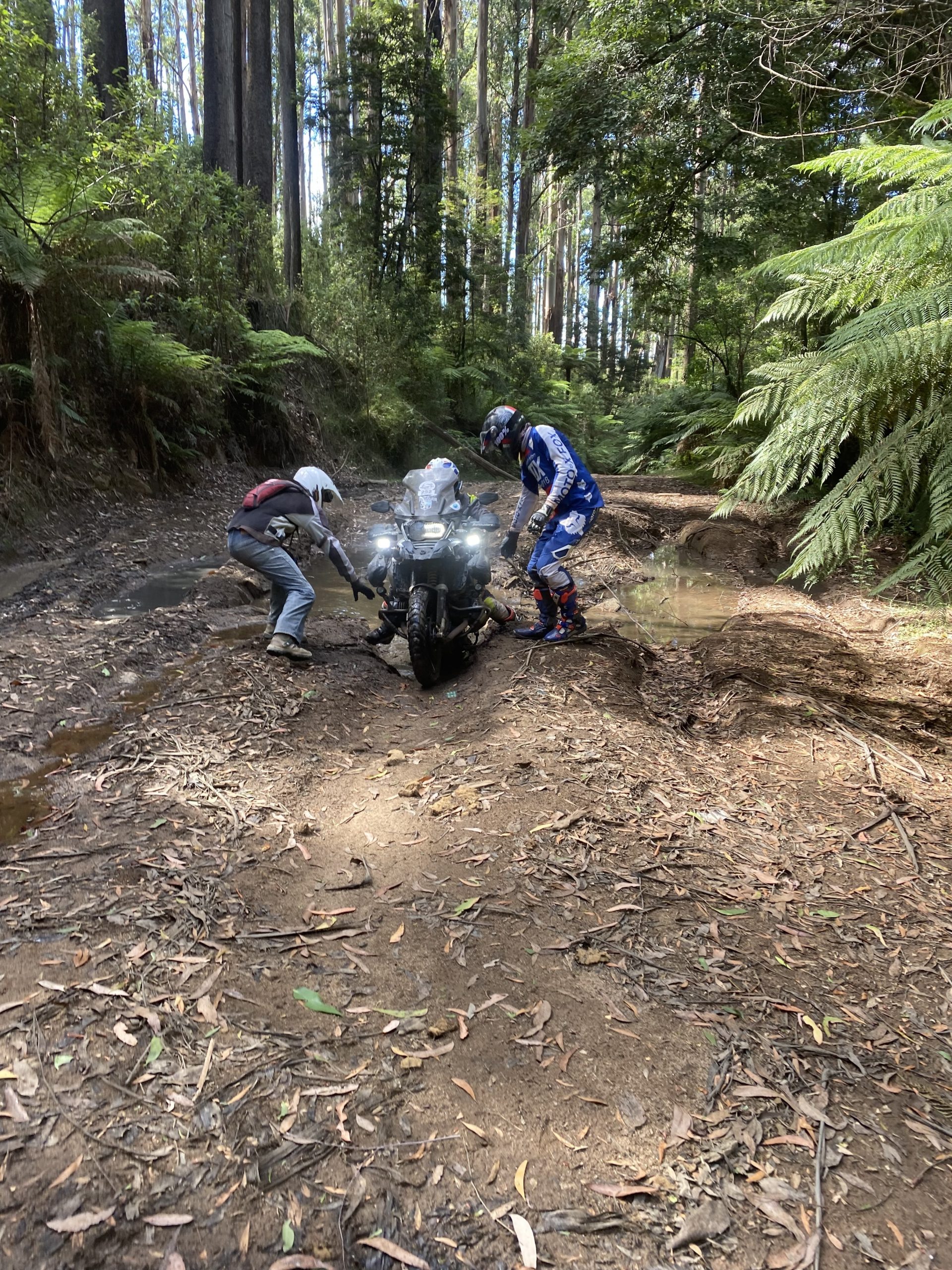 U-turn #3: Aeroplane Track, bikes lifted, pushed and pulled to turn them around on a track that was getting a bit too difficult. 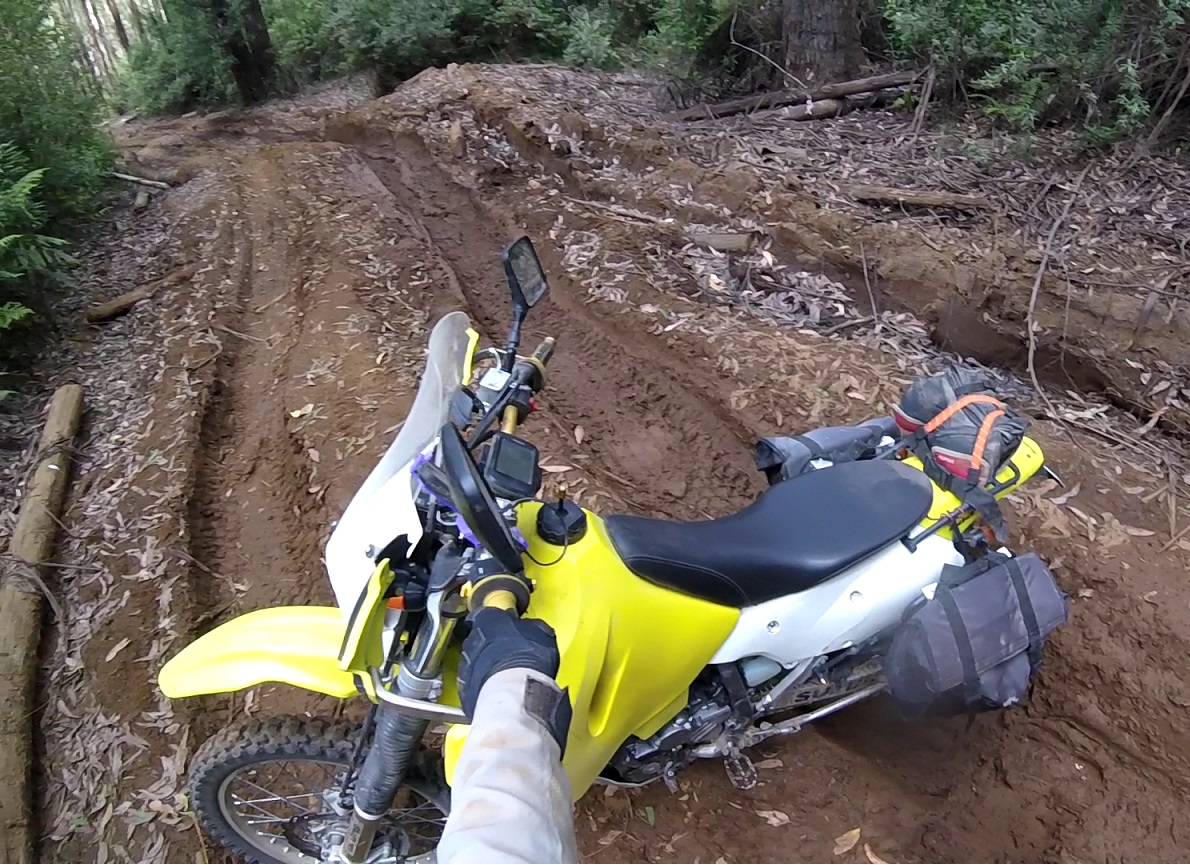 At this point it was early afternoon, we were all a bit exhausted from man-handling big bikes so it was decided to head to Healesville. I plotted a quick escape down through the twistys and we finished up at the Watts River Brewery for some “Nipper” beers, and a couple of lightly-topped pizzas.

Not sure if we’ll be able to make a mainstream ride out of this trip, I suppose we know where NOT to go!